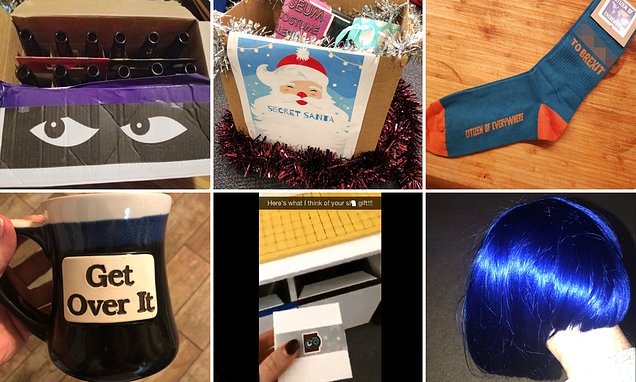 Christmas is a time for giving, but in some cases you can’t help wish that they hadn’t bothered as these photos prove.

People from across the globe have shared the worst Secret Santa presents they have received this year in a hilarious Twitter thread.

As the final working week before Christmas begins, workers have gone online to reveal the not-so thoughtful gifts colleagues bestowed upon them as part of the festive gift giving tradition.

But with a famously low budget, many were left rather disappointed, left with stained coffee mugs, lip balms from Poundland and even rotten clementines.

Many were left furious having put an extensive amount of time and effort into their gift, only to receive duff presents such as a box of empty beers, a mankini and in one case even a ‘willy warmer’.

However, in some cases workers used the opportunity to seek revenge, with one revealing they had drawn their boss as their Secret Santa and gifted them with their two week’s notice. 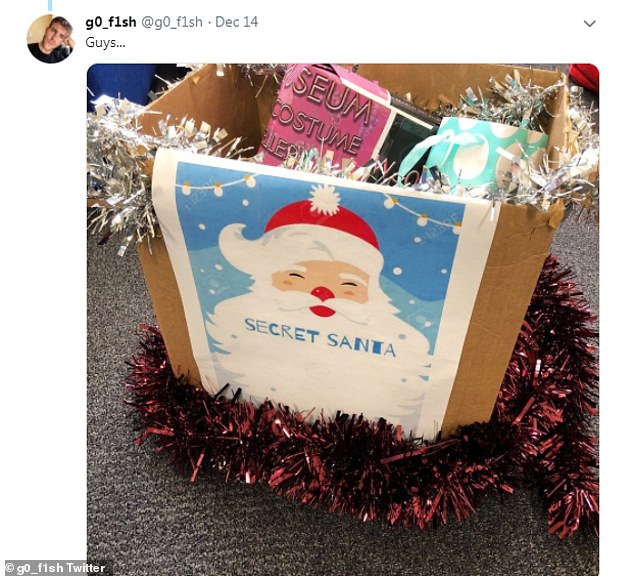 People from across the globe have shared the worst Secret Santa presents they received this year, including mouldy clementines and stained coffee mugs, in a hilarious Twitter thread. Pictured: Twitter user g0_f1sh shares a snap of his work Secret Santa box 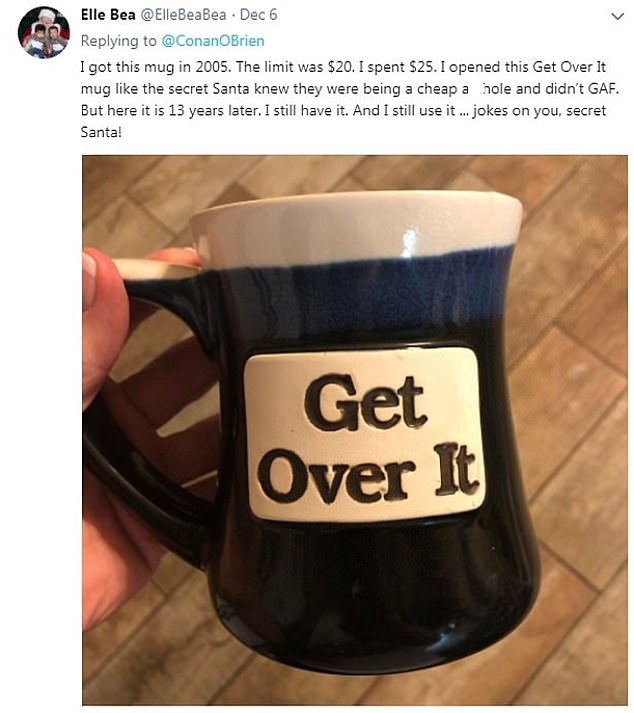 Elle Bea from the US was left enraged when she spent a generous $20 on a previous Secret Santa, beating the budget of $20, but only received a mug emblazoned with the words ‘Get over it’ 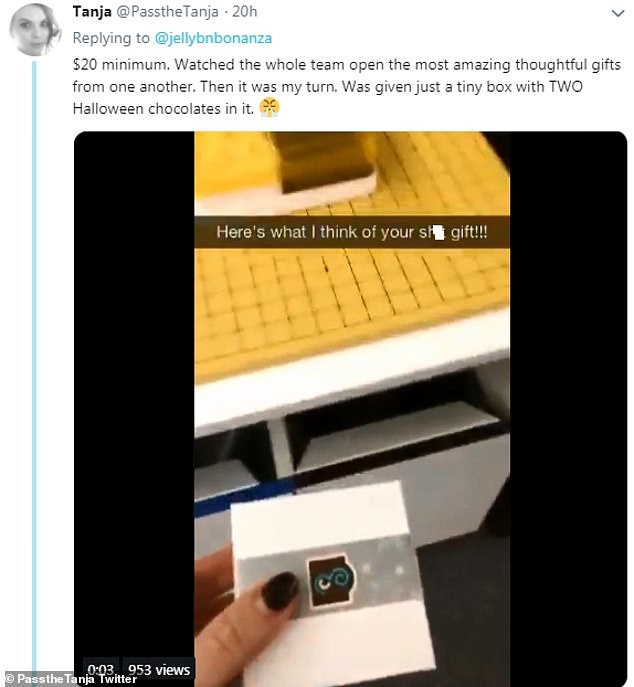 Meanwhile US-based Tanja was less than pleased when she watched the rest of her team receiving ‘amazing and thoughtful gifts’ worth $20, before unwrapping her own and discovering a tiny box containing two Halloween chocolates 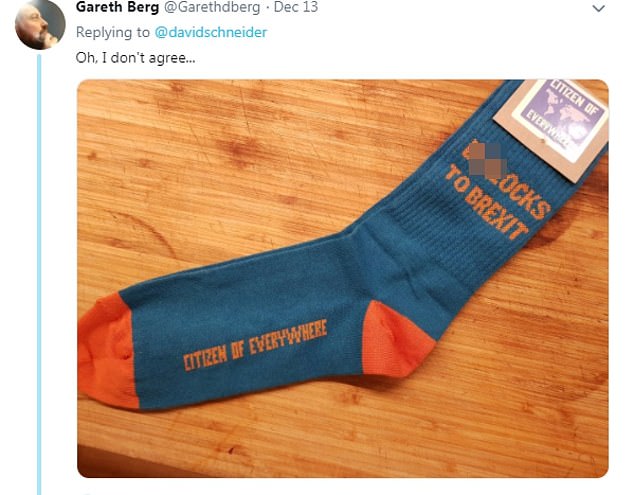 Meanwhile British Gareth Berg was amused to discover he had received a pair of socks for his Secret Santa present, inscribed with the words ‘b***ocks to Brexit’ 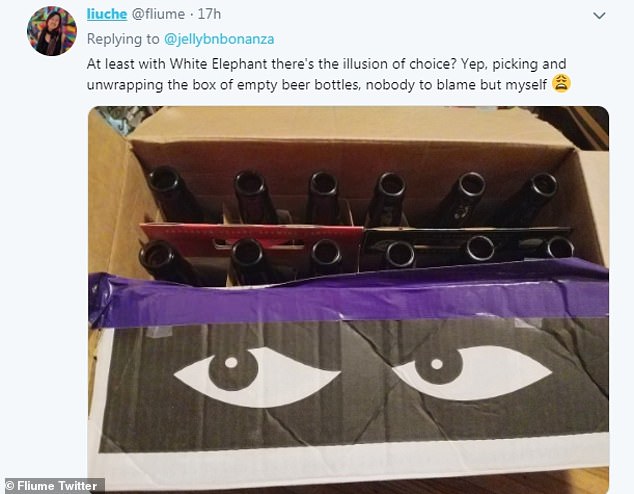 Meanwhile Liuche revealed that she unwrapped her present, only to find a box of empty beer bottles for her annual office gift 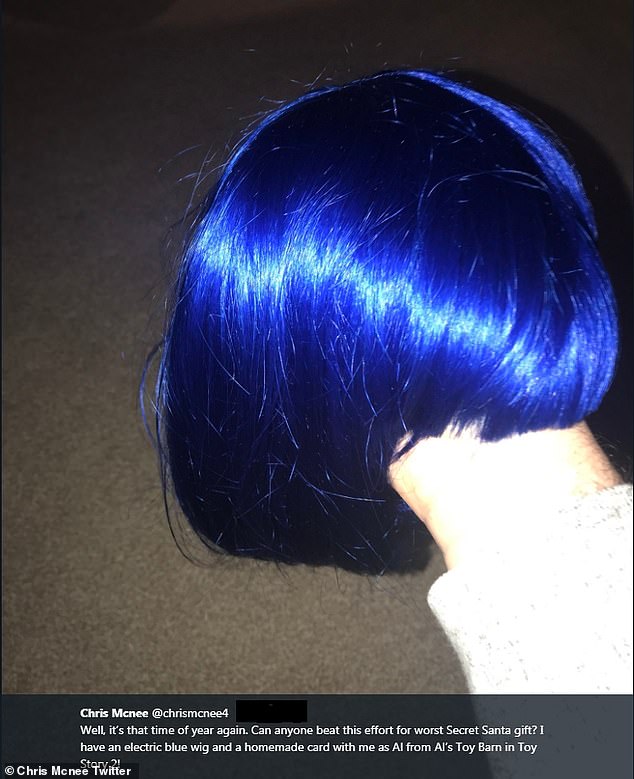 And Chris Mcnee from Livingstone branded an electric blue wig ‘worst Secret Santa gift’ he had received, which came along with a homemade card featuring him as Al from Toy Story 2

Meanwhile American Twitter user Izza Saks went all out for her Secret Santa, purchasing a locket, nail polishes, a keychain and candy, so was less than impressed when she received a scrunchie in return

Elsewhere a user by the name of Wendy bought a bottle of whiskey and tumblers for her gift recipient, but was left with a crate of rotten clementines

Others felt responsible for the bad gifts they had given, with a user by the name of Ellie receiving her malfunctioning pen resulted in it looking like a 6-year-old had written her card

But another office proved just how important Secret Santas were for their workers, when a colleague was fired and the first question was how it would affect the annual tradition

Sharing her dilemma, a festive fan naming herself ‘Charlotte Christmas’ said told how she got her Secret Santa a gift card, glove and scarf set in a handmade giftbag and received a stained coffee mug with Halloween candy in response

But despite the horror stories doing the rounds on Twitter,  British user David Schneider admitted he missed the action, tweeting: ‘Secret Santa is very disappointing if you’re self employed’

And others revealed their master plan for the next year, with Kevin Droniak revealing that he would be writing his name on each paper for next year’s Secret Santa, leaving him with an array of gifts