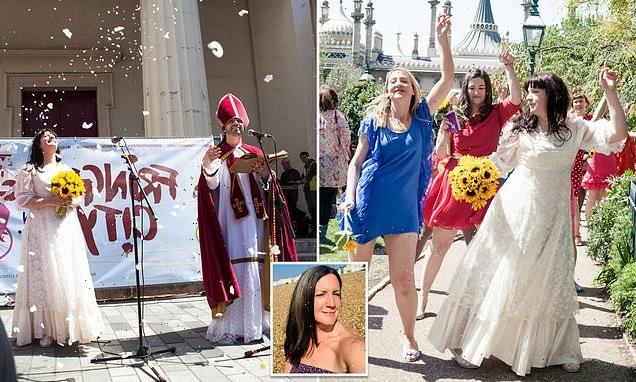 A woman who is married to herself has insisted the process has made her more eligible because it has taught her how to deal with her own issues so a partner doesn’t have to.

Sophie Tanner, 42, wed herself in a Brighton ceremony in 2015, five years after her last serious relationship, which came to an end when she discovered her boyfriend had cheated on her with one of her close friends.

She decided upon the wedding, which was a symbolic ritual, as a way to express love for herself and believes her relationships with friends and family have improved as a result.

But she added that she is open to the possibility of finding love with a man but admitted it is not a priority right now.

‘I’m a big advocate of self love but that doesn’t mean I’m against romantic love. The two aren’t mutually exclusive,’ Sophie said. 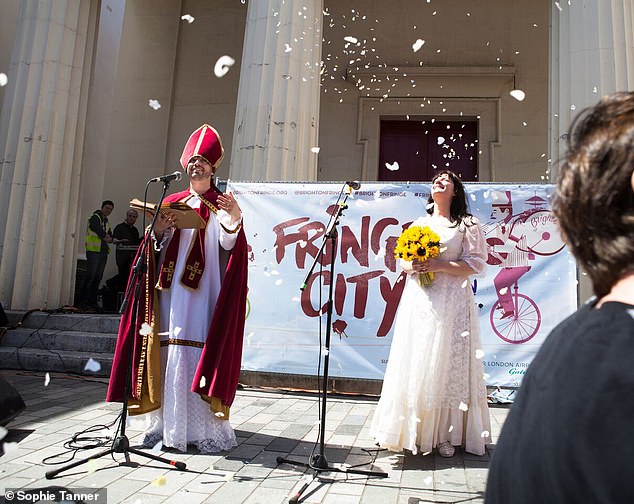 Sophie Tanner, 42, who lives in Brighton, has revealed how marrying herself in 2015 (pictured) has changed her life ahead of her sixth wedding anniversary 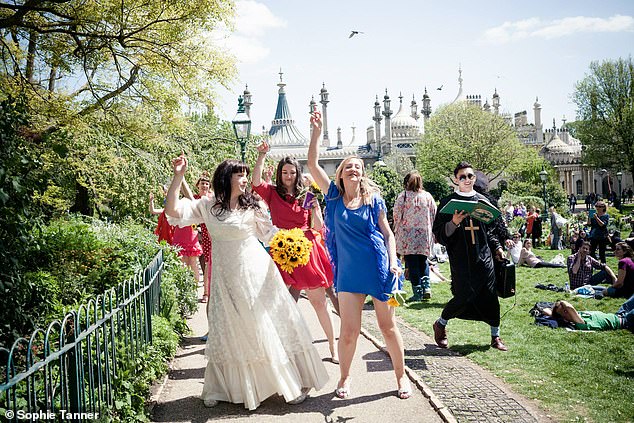 Sophie said she’s stopped explaining why she hasn’t ‘settled down’ and found empowerment in the six years since her wedding. Pictured: Dancing to her wedding with friends in 2015 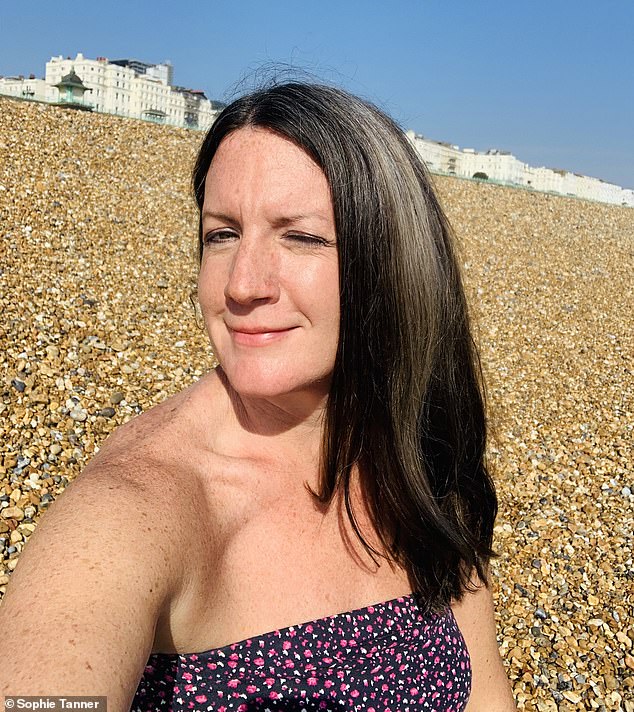 Sophie said she doesn’t enjoy dating apps because they are a ‘symptom of our disposable culture’. Pictured: Sophie now

‘I have a huge respect for the deep love connection that two people can find together, it’s very special and deserves proper respect and value. I really admire couples who make it work. So, yes, I’m totally open to having a partner but I don’t necessarily see it as the only path to living a happy and fulfilled life.

‘Since I married myself I have been attracted to other guys but they haven’t become partners for one reason or another. My friends totally get the point I’m trying to make, they weren’t expecting me to live like a nun.

‘However, other people, particularly online trolls, choose not to understand where I’m coming from. They say I’m cheating if I date someone and I can’t have my cake and eat it.

‘But I think that having a good relationship with yourself actually benefits your romantic relationships. After all, the more you deal with your own c***, the less your partner has to,’ she said.

Sophie decided to marry herself in 2015 after the end of a serious relationship.

Before her ceremony she had relationships of varying lengths but had a tendency to put her partner’s need before her own and was frequently cheated on. She added that the experiences made her question if there was something ‘wrong’ with her.

She explained: ‘My boyfriend – let’s call him Bob -, who I lived with in Brighton, had cheated on me with one of our friends, who’d told me I was ‘paranoid’ when I expressed suspicions. 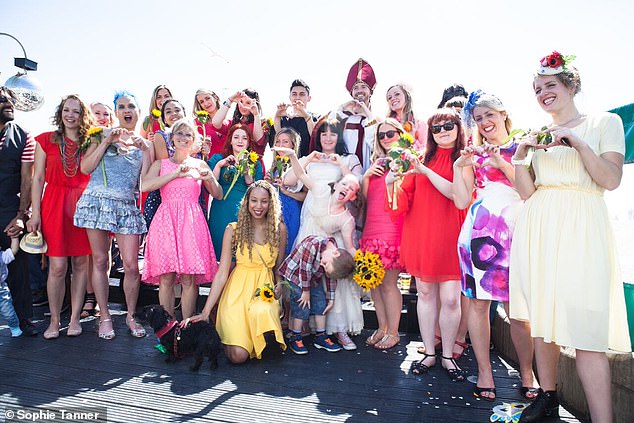 Sophie, who doesn’t wear a wedding ring, said she wore a costume ring for her wedding ceremony as a symbolic gesture. Pictured: Sophie and guests at her wedding 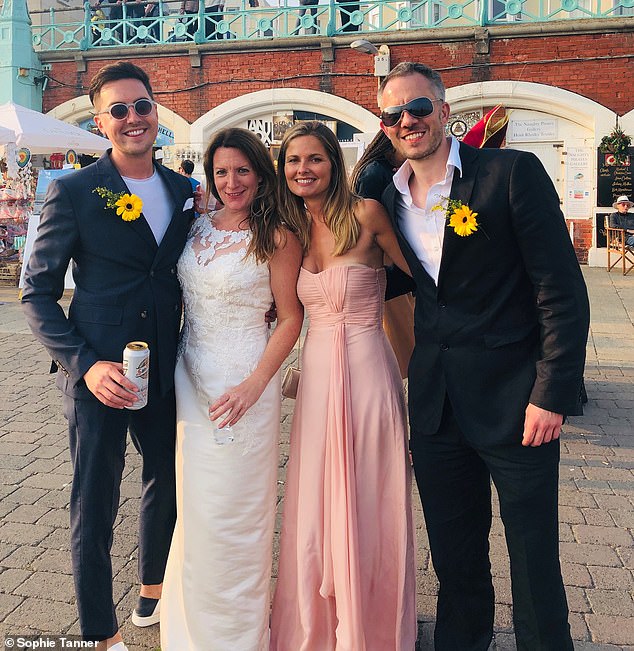 Sophie whose most recent relationship didn’t work out, said she has more self respect when dating now. Pictured: Sophie celebrating her vow renewal with friends in 2019 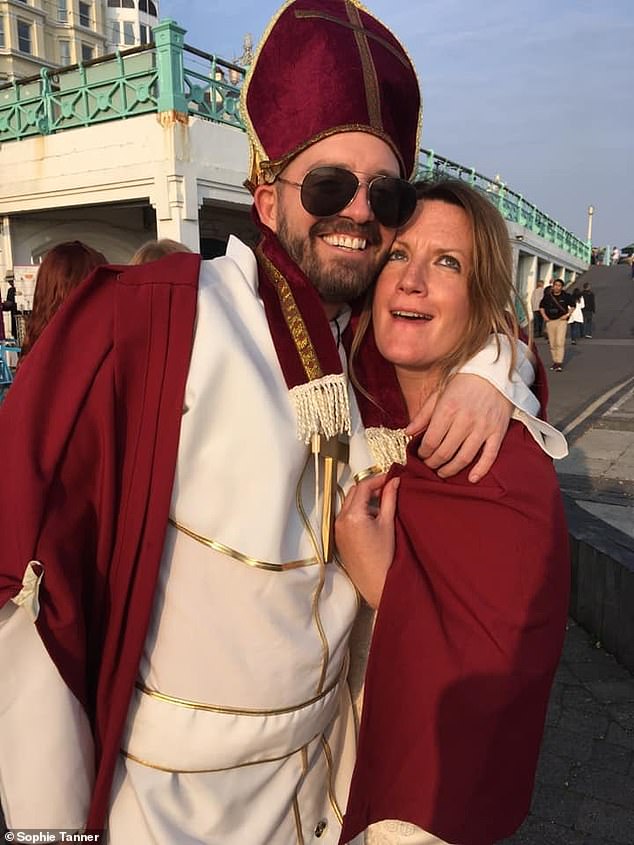 Sophie said she knows of people who’ve met their partners online but there’s ‘too much admin’ involved to try it for herself. Pictured: At her vow renewal 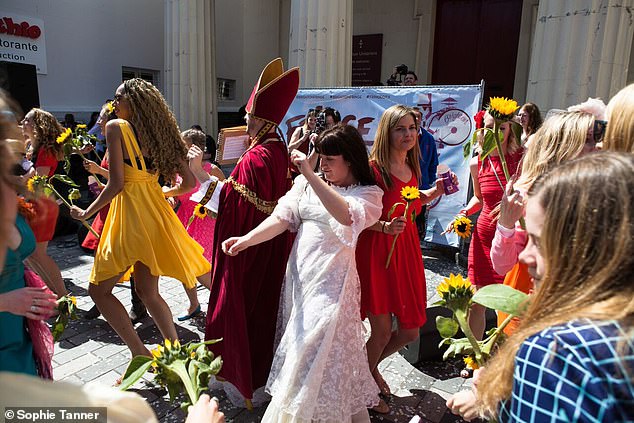 Sophie said she had been single for five years when she decided to get married and had been cheated on in most of her past relationships. Pictured: Sophie’s first dance in 2015

‘The whole sorry affair took a while to come to light, and the depth of Bob’s betrayal was staggering. He’d first slept with her on Christmas Eve, in the bed we shared, while I was away with family.

‘He then visited me on Boxing Day and met my mum for the first time, staying for a few days. I still don’t know how he had the gall to do that. Anyway, after he’d moved out and gone off with her, I had a bit of a downward spiral.

‘I’ve always been an optimistic person and usually bounce back from knocks quite quickly, but this break up took me a while to recover from. It was during this time that the idea of self marriage first struck me,’ she recalled.

As there are no legal requirements for a self-marriage, Sophie decided to register the event as a performance at the Brighton Fringe Festival 2015, which allowed her to conduct the ceremony on an open-air stage on the steps of the Unitarian Church.

She was married by her friend, James, bought a dress and asked 15 friends to be her bridesmaids. 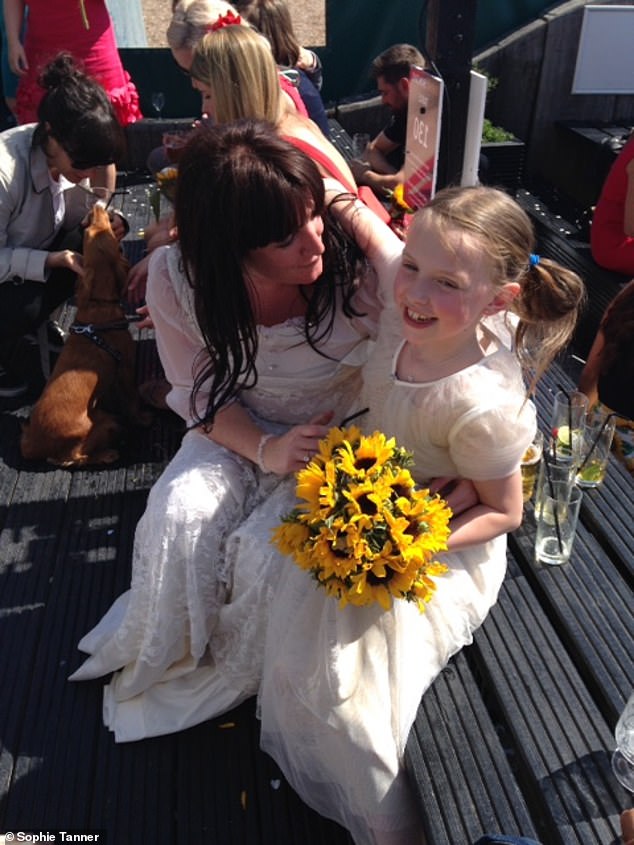 Sophie said she was surprised that some people were angry about her decision to get married to herself because the commitment doesn’t hurt anyone. Pictured: Sophie at her wedding 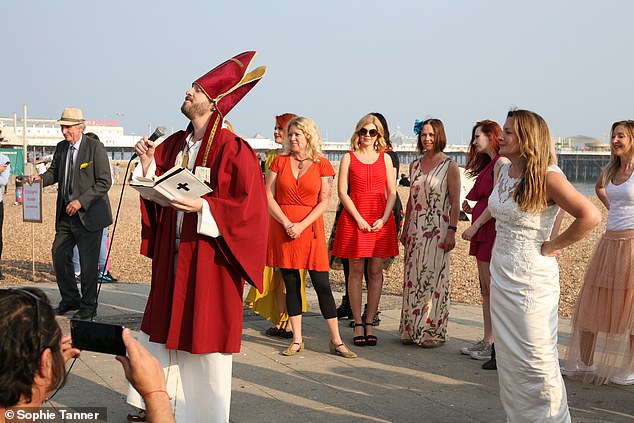 Sophie said self love has become a buzz word but she truly believes looking after our own physical and mental well-being should be a priority. Pictured: At her vow renewal

She continued: ‘I also asked several of my male friends to be ushers to help direct the party. I hired a space at a popular bar on the beach for the reception afterwards. And I invited all my family and friends along to my big day.

‘It was a glorious, sunny day in May that I’ll never forget. I got ready with my bridesmaids on the Saturday morning, getting dressed up and having bubbles, they all wore their favourite bright colour and I wore my vintage gown and carried a bouquet of sunflowers.

‘We danced through the Pavilion gardens, carrying a boombox that played Kendrick Lamar’s I Love Myself then my dad walked me to meet my friend James ‘the pope’ on the steps of the Unitarian church.

‘A crowd of my friends and family gathered around to watch as I took my vows of self-commitment. It actually felt much more powerful than I’d imagined – promising to accept my failures and embrace my dreams – people told me afterwards that they got goosebumps. Lots of passers by also stopped to watch. 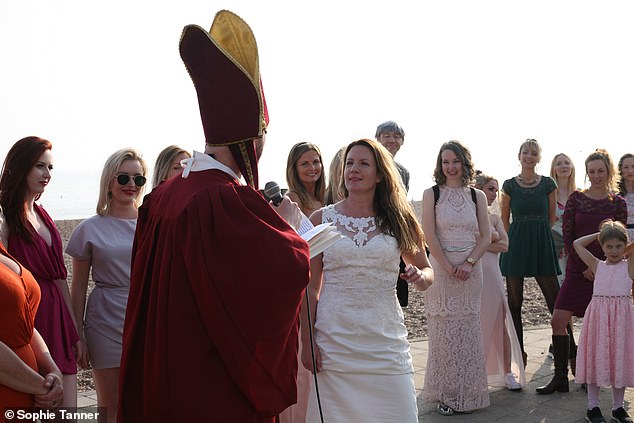 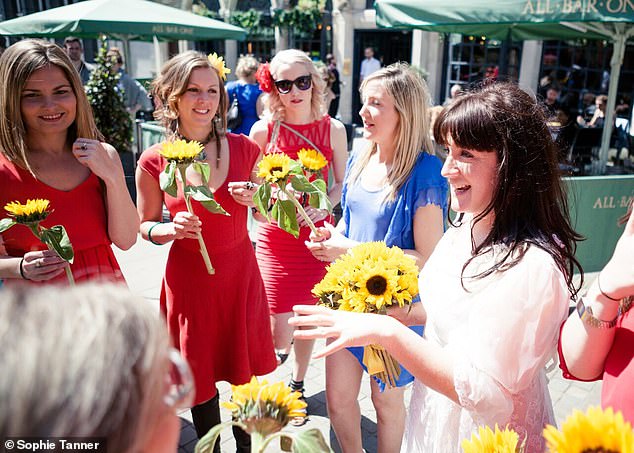 Sophie said self-marriage is also an option for men, but there’s usually more pressure on a woman to marry. Pictured: Sophie and friends at her wedding in 2015 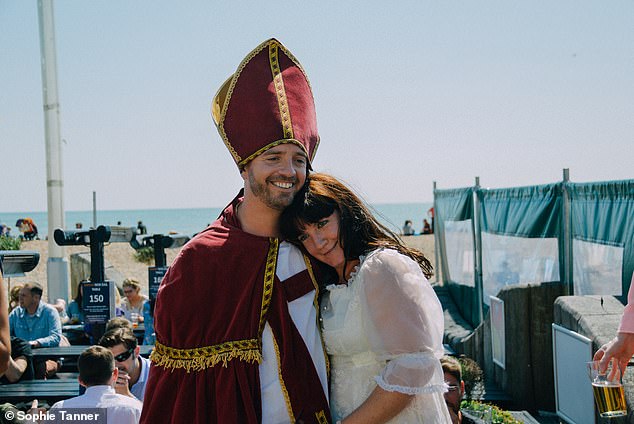 Sophie said a woman marrying herself could be seen as a feminist statement to say that she doesn’t need a man to live happily ever after. Pictured: Sophie at her wedding

‘My dog was the ring bearer, and I declared “with this ring, I me wed” as I put it on my finger and everyone cheered. I invited everyone to join in my first dance and then we all processed our way down to the beach to the tune of Chesney Hawkes’ I Am The One And Only.

‘I didn’t actually purchase a ring for the wedding as I never wear jewellery, especially rings. I used a dress ring for the ceremony as a symbolic gesture.’

While Sophie’s father and friends who attended the wedding were thrilled for her, she admitted some disagreed and were ‘angry’ with her decision.

Sophie said in the years since she has truly learned how to love herself and believes it has made her a better friend and relative. 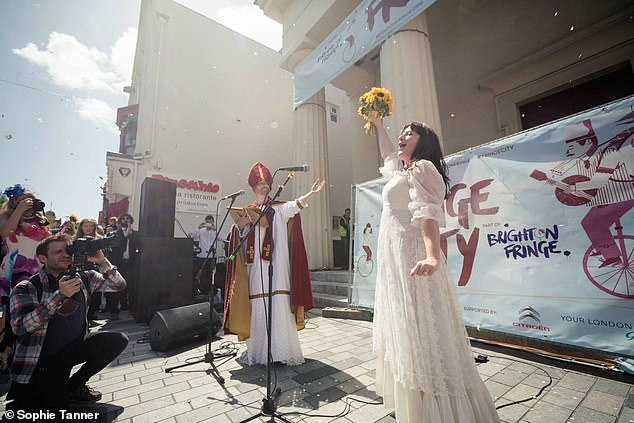 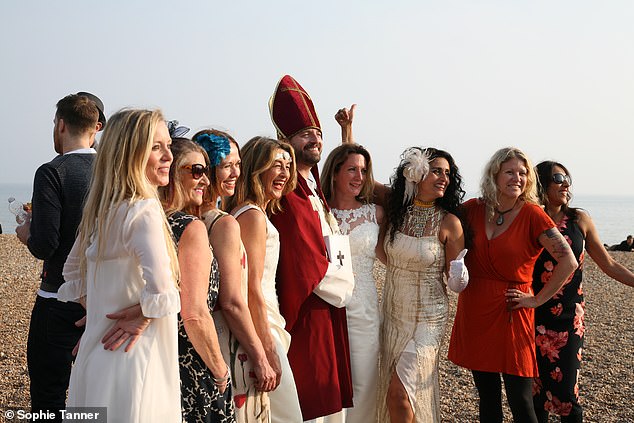 Sophie hired a popular bar on the beach for her wedding reception and had 15 bridesmaids. Pictured: Sophie’s vow renewal 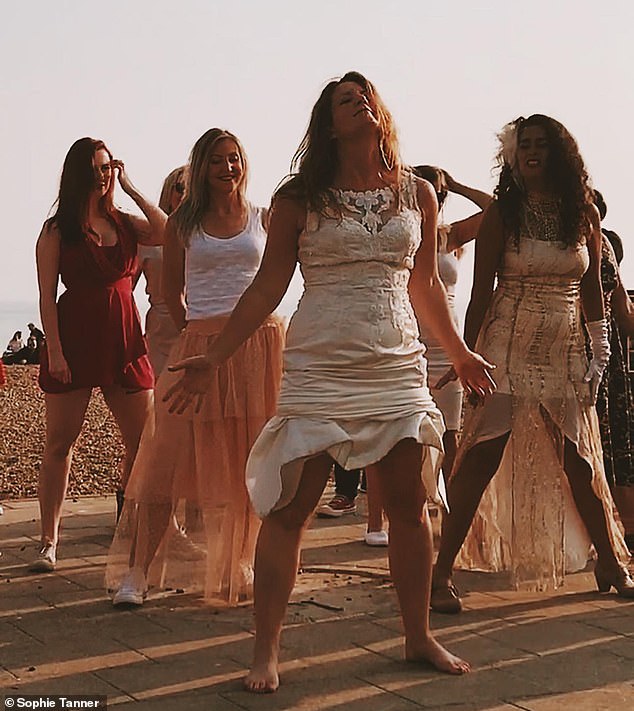 Sophie revealed she will be running self love workshops with her therapist friend, as the enforced lockdown has made self-love more of a priority. Pictured: Sophie at her vow renewal

She said: ‘It’s actually impacted my relationships in a really positive way. Kindness starts with the self, and once you’ve nailed that, you have plenty of compassion for others.

‘I find I have the time and space to be there for other people, to actively listen to them and offer support where I can. It’s great that most people have changed the way they treat me as a single person too.

‘I rarely get those sort of pitying “poor old you without a partner” comments any more. My friends and family enjoy introducing me as the sologamist as it makes for a novelty dinner party conversation and certainly opens up some interesting discussions.’

Sophie claims ‘society is obsessed with romance’ and people assume you’re miserable or have something wrong with you if you’re single.

‘This is why a lot of women can’t help but feel shame and embarrassment if they’re still single at “settling down” age,’ she said.

‘They have to constantly come up with reasons as to why they’re unattached and often make rash decisions because of this pressure, getting into the wrong relationships because they’re so afraid of being on their own and “left on the shelf”,’ she said. 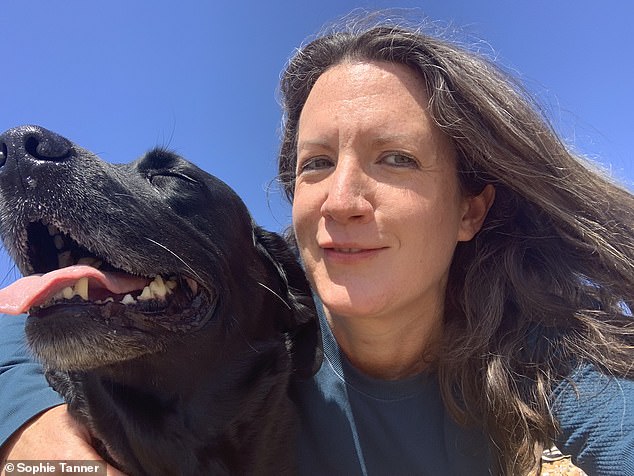 Sophie said she wouldn’t divorce herself, despite being open to getting married to someone else, because she will always be ‘responsible’ for her own happiness. Pictured: Sophie now 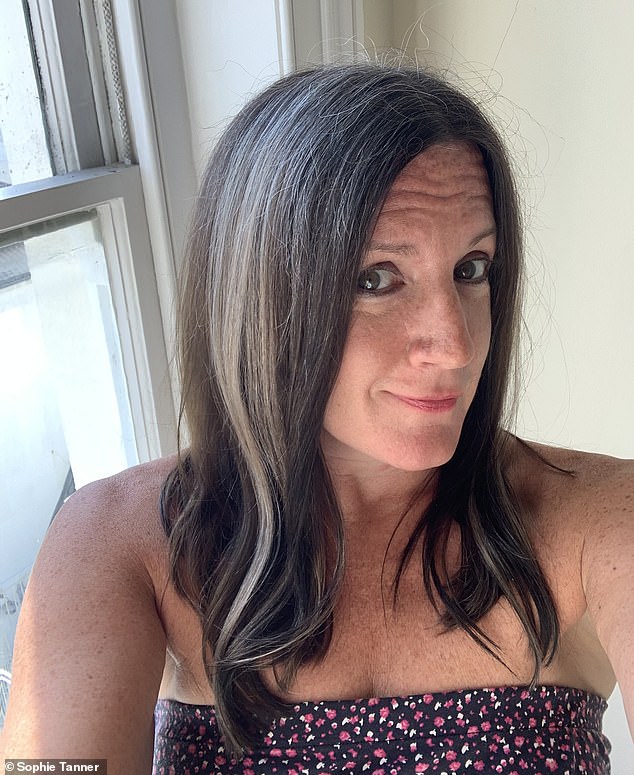 Sophie said she hasn’t received the criticism and challenges from loved ones that are explored in her fictional book about self marriage. Pictured: Sophie now

The self-declared ‘sologamist’ said self-love has never been more important than in the last year.

She added: ‘The enforced isolation that lockdown has brought on us this past year has meant that self care and self love have become less of a fad and more of a priority. Personally, I’ve had to dig deeper into my reserves of self-love than ever before, and the experience has been humbling.

‘None of us can exist entirely on our own; we’re social creatures who need contact to thrive. When we’re lonely it’s a signal that we need to do something to reconnect us to our community and feel like we belong.’

As such, Sophie, who runs the Instagram account @TheSologamist, has teamed up with a therapist friend and will soon be running self love workshops.

Sophie’s top tips for self love

Sophie said: This past year we’ve all had to dig deeper into our reserves of self-love than ever before. Here are some tips on how self love can help us to cope when life gets tough…

Acknowledge loneliness – we all feel separate from others at times, whether that’s physically or emotionally – it’s what makes us human. When we feel lonely it’s a signal that we need to do something to make us feel reconnected.

Kindness starts with the self – when we find compassion for ourselves, we can then offer it to others. Helping someone else can widen our perspective and make us feel useful.

Be conscious about online behaviour – although relating to others can help us feel connected, it can be easy to take on too much. In times of low confidence, turn away from the virtual world and do something grounding.

Learn to self-soothe – many of us are guilty of turning to unhealthy vices when we’re stressed. It’s more useful to tap into our inner parent and comfort ourselves in a nurturing way.

Take yourself outside – being outdoors in a natural environment can bring a strong sense of companionship, and a connection to something bigger than ourselves.

Make home a sanctuary – taking care of our immediate environment can help to make us feel more secure within ourselves. Making small improvements and adding pleasant touches can really brighten up our space.

Embrace the power of solitude – spending time alone is not something we should avoid, it can be a form of meditation on ourselves and the world around us. It allows us to check in on our emotional state and make adjustments where needed.

Encourage your authentic self – we should always embrace aspects of ourselves that we genuinely like, and not give a damn about what anybody else thinks.