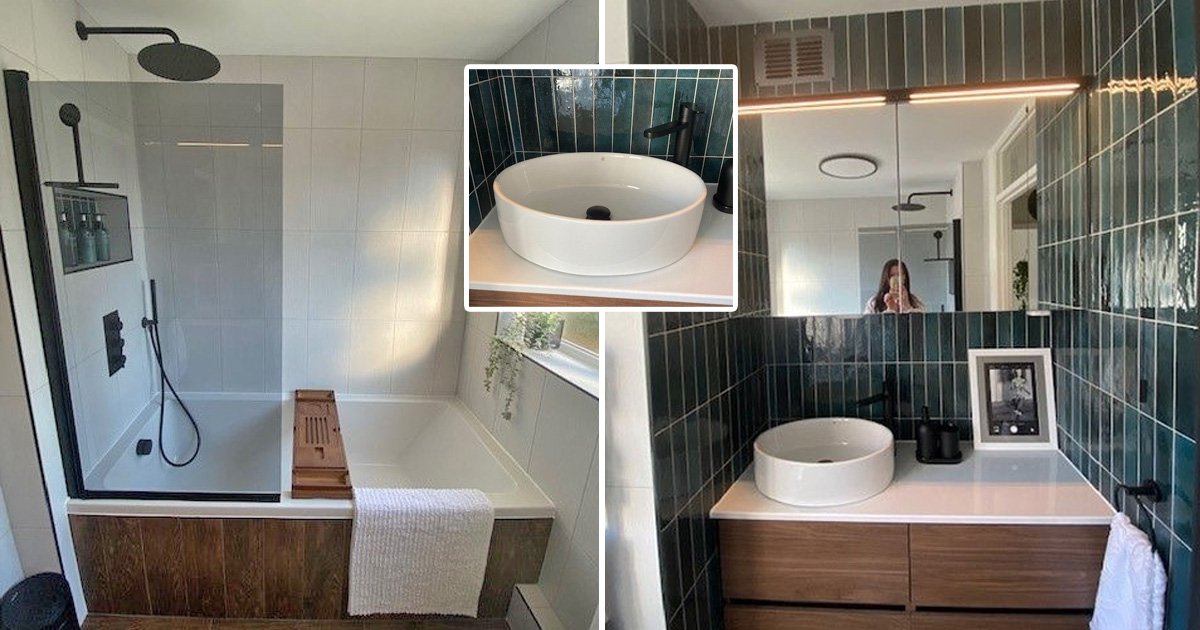 Renovating any room in a house is expensive, especially when it’s a bathroom revamp.

From plumbing to tiling to electrics, it may feel like there is no way of cutting costs.

However, one smart and savvy homeowner has proven that if you can’t avoid a big cost, there are still savings to be made along the way.

Sally Killington, 43, is an executive assistant from Essex and needed to overhaul her bathroom which hadn’t been touched for decades.

Because a new boiler was required, the renovation cost £10,000, but Sally says she saved nearly £2,500 by buying from Amazon and Ikea and doing her research.

The finished result is a stunning bathroom worthy of any Pinterest board.

‘I bought my maisonette in September 2021,’ Sally explains. ‘At the time, the housing market was booming due to the stamp duty holiday and I only got to see it once, for 10 minutes, before I moved in.

‘As a result, I severely underestimated the amount of work needed. The bathroom was in the most desperate need of modernisation.’

Sally says the bathroom was in such bad shape that some elements barely worked and it became increasingly frustrating.

‘The property once had a water tank so there were large cupboards in the bathroom that used to house it, which were now dead space,’ she explains.

‘The bathroom itself was old. I think the sink and toilet may have been the originals from when it was built at the end of the 1960s and they are barely functional.

‘An electric shower had been installed at some point which was so far back from the end of the bath, you had to practically limbo to get the water to hit you.’

‘The bath was a cheap acrylic one that would drop as soon as you put the smallest amount of water in it. The taps had eroded, the pipes were ugly and exposed, the radiator had rusted and stopped working and the light switch was practically in the middle of the room. It was a bit of a disaster.

‘There was also a really old boiler that had had the front panel removed so that needed replacing too.’

Sally knew she wanted to utilise the space as much as possible and was determined to install a bigger bath. Her father advised her to add a separate shower but she wasn’t keen on the idea.

‘Instead we discussed having a large vanity unit and I liked the idea of gaining back some space whilst maintaining some storage,’ she recalls.

‘The boiler had to remain in the bathroom so I decided that I would get some mirrored cabinets to cover it. The large mirrored doors would then give the illusion of a bigger space.’

Once Sally knew what she wanted, the real hard work began. She spent months looking for the perfect additions and items.

‘It took months of looking at showrooms, going through brochures, trawling websites, reading reviews and so on,’ she says. ‘I wanted it to be modern and clean without looking clinical – but I was also conscious of the fact that I couldn’t just re-do it if I didn’t like it, so it was quite a lot of pressure making decisions.

She continues: ‘I wanted a bit of colour in there and whilst other colours are more on-trend, I opted for the greenish-blue tiles as blue is my favourite colour so I knew I wouldn’t get bored of it after a couple of years.

‘I ended up buying everything separately from different places. I bought the main bathroom suite, which included the bath, sink, toilet and vanity, from a bathroom shop called Damans of Witham.

‘The mirrored cabinets were bespoke from a company in Portsmouth as typically, bathroom cabinets aren’t made as deep as I needed mine to be.

‘And the rest I bought from various online shops including Porcelain superstore, Plumbworld, Big Bathroom Shop, IKEA and Amazon.

For a small room, it was a very big job. I had to get the professionals in, but luckily, my friend’s Dad does bathrooms for a living so I knew I had someone I could trust.

‘We removed the cupboards and part of the wall, moved the waste for the toilet, moved and replaced the boiler and replaced all the old pipes. There were also a lot of false walls put in to cover pipes, and a false ceiling to hide the new electrical wiring.’

Originally, two weeks was the estimated finish time but it took closer to three weeks in the end. The total works set Sally back just over £10,000.

While it is a big price, Sally says she still managed to save £2,500 on the renovation.

‘My tips on saving would be to ask your workman to recommend suppliers,’ she advises. ‘Shop around, look at delivery costs, buy value packs when it comes to taps and showers. Look at places like Amazon and IKEA instead of going to specialist suppliers who cost more.

‘Plan your budget and be realistic about the number. Also, do a lot of research before you buy things. Read reviews from companies you are ordering from to make sure the products are the quality you are expecting.’

‘The biggest saving was probably on using the builder’s recommendations for suppliers of large goods as they were really helpful in shopping around for what I wanted and keeping within my budget, as well as offering good discounts where they could.’

If you want more tips and tricks on saving money, as well as chat about cash and alerts on deals and discounts, join our Facebook Group, Money Pot.