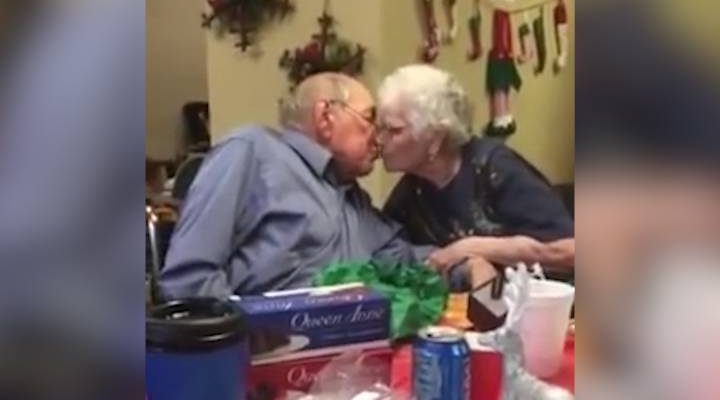 Patricia May Johnson, 85, is really proud of her new engagement ring. It was the last thing she was expecting but after everyone opened their Christmas presents, the surprise awaited her.

At a family gathering on Dec. 23, in DeKalb, Ill., everyone was watching and waiting anxiously as Patricia opened her perfectly wrapped present gifted to her from her husband Don Johnson of 67 years.

Inside was a diamond engagement ring.

When Patricia opened the box, she burst into tears. Family members around her were in awe as the couple leaned in for a peck on the lips.

“She showed everyone. She almost blinds you with it showing it off,” her daughter Diane Hawkins told Global News over the phone.

Last May, Patricia’s ring went missing in her nursing home after she had taken it off due to an injury, and placed it in a jewelry box on her dresser.

Patricia had fallen and injured her left hand. It became too swollen for her to keep her ring on.

The old wedding ring that went missing after Patricia took it off because of an injury.

“Dad asked me to take him shopping to buy Mom a new engagement ring and wedding band,” Hawkins added.

The new wedding ring Don picked out for his wife of 67 years.

But getting the new ring wasn’t an easy feat, says the couple’s daughter.

“We had to lie to get him out of the nursing home. We said Dad had a speech appointment,” Hawkins said. Her father has Parkinson’s disease, so it’s difficult for him to talk and move, she added.

Hawkins says Patricia wanted to join them since her parents are inseparable, but she insisted they go alone. Secretly, they went to the jewelry store and picked out the “perfect ring.”

Hawkins says she’s grateful for her parents’ lasting relationship but it didn’t come without hardship. Don originally proposed to Patricia in 1951 when he was going into the National Guard.

They organized a small wedding quickly before they moved to California. Then they moved back to Illinois where they started farming. They raised seven children. During the teen years, it was especially difficult, Hawkins admitted.

“The marriage was not without fights. It was your pretty normal marriage but I think it’s their love that just pulled them back together, always. Even if they are mad at each other, it’s not over a long period of time,” Hawkins said.

Patricia now wears her ring proud and Hawkins says her mother is overjoyed.