A heartbroken woman has sparked a furious debate online after asking for opinions on whether it’s acceptable to take time off work to deal with a breakup.

Taking to parenting forum Mumsnet, the anonymous user, who is thought to be UK-based, asked if she was being unreasonable to want to take sick leave to deal with ‘turmoil’ caused by her split.

Her post garnered a range of responses – but while some posters were sympathetic about her troubles, others told her she needed to ‘adult up’ instead of wallowing.

She wrote: ‘I’m going through a horrible relationship break down. We were together a long time and we have a young child (under two). 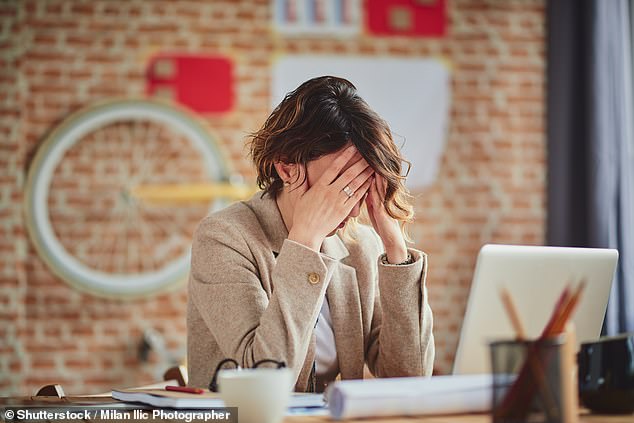 An anonymous Mumsnet user posted that she was crying at her desk due to her break-down, asking others whether they think it’s okay to call in sick due to heartache (stock image)

‘I am heartbroken and I wake up every day and burst into tears straight away when the reality of my life hits.

‘I have sick feeling in my tummy all the time. I just want this to stop and go back to how it was before this happened.

‘My sickness record at work isn’t the best, I’ve got physical health conditions that have flared up this year and had to have time off for them.

‘My job is mentally demanding and it’s not the sort of environment where being emotionally vulnerable is a good idea. Yet I’m in absolute turmoil inside.

However, she added in response to another poster who suggested that she take time off, she was worried that taking sick leave would leave her open to judgement from others

‘Help, please? Can I be off work for this? Do people take time off for relationship breakdowns when they are feeling like I am?’

In response, one user wrote: ‘Could you speak to your doctor? Maybe they could give you a week or so for stress?’

To which the woman replied: ‘I could, I’m just worried what people are work will think of me.’

She added: ‘Would you judge a colleague for being off for this reason? I hate letting people down but just don’t feel like I can do it anymore. I want to curl up in a ball and cry all day.’

Responses to the question were mixed – while some agreed that time off would be a good idea, others felt that it could look bad, and that it might be better to forge through, and use work as a distraction from the heartache.

One wrote: ‘I wouldn’t personally [take time off] but sounds like you’re really struggling. I think it’s best you go and get a sick note maybe.’

Another agreed, writing: ‘I wouldn’t judge a colleague for being off sick with stress following a relationship breakdown. No.’

A third added: ‘Some people will judge you, but no one who’s ever been through it. You should still see your doctor.’

Meanwhile a fourth revealed that they had not taken time off when their husband had died – but in retrospect, it would likely have been better all round if they had.

The wrote: ‘I carried on after dear husband died. My employer was very sympathetic and allowed flexibility and a lot of working from home, so I did what I could and tried not to let anyone down.

‘With hindsight it would have been much better for everyone if I’d just taken a few weeks sick.

‘People are generally more sympathetic to a bereavement, but the grief response is the same, as are many of the practical issues you’re facing. Take care of yourself now and long term you’ll be a better employee.’

Other Mumsnetters felt that the poster needed to ‘adult up’, and not take time off work due to her breakup

But some thought it was a bad idea to take time off work – particularly if the person had already called in sick, as the woman had noted in her original post.

The original poster said she had already taken six days sick leave from her job as she had a physical condition that sometimes flared up. But she said her colleagues wouldn’t have to pick up the slack.

Discussing what their own response would be to a colleague taking time off for heartbreak, one respondent wrote: ‘Honestly, with what you’ve said about your absence history, yes I would judge you. Needing a day to pull yourself together is one thing, but that’s not what you’re suggesting is it?

‘You’re ‘going through a relationship breakdown’ – that is hard, but how long will this be going on? Will you want to be off work for the whole time? Then again when it’s properly over?’

Another added: ‘As a one off for a colleague with good attendance then I’d be very sympathetic.

‘As one more absence for a variety of different reasons then honestly I’d feel frustrated with them. Mainly because absence puts pressure on everybody.’

A third wrote: ‘In answer to this, as a one off for a colleague with good attendance then I’d be very sympathetic.

‘As one more absence for a variety of different reasons then honestly I’d feel frustrated with them. Mainly because absence puts pressure on everybody.’