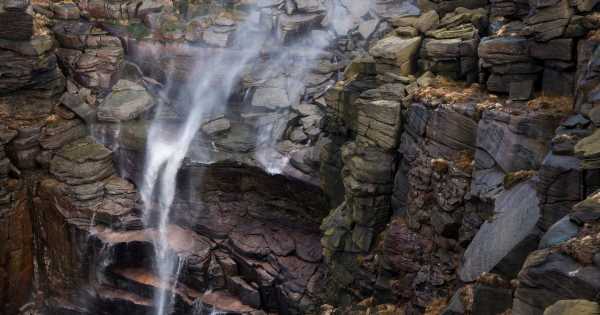 A 29-year-old woman died after plunging off the edge of a waterfall during the bank holiday.

A jogger who tried to save her said he'd 'never forget' the moment he scaled a cliff face to help the walker, who has not yet been identified.

She fell off the edge of Kinder Downfall waterfall in the Peak District, Derbyshire, on Easter Monday.

Despite desperate attempts by Kinder Mountain Rescue Team and the Lincs and Notts Air Ambulance, the woman died at the scene.

The traumatised fitness trainer from Lincoln, who asked not to be named, had to be rescued himself following the incident.

Have you been affected by this story? Email [email protected]

He said: "It was a day I don't want to remember but I know I'll never forget.

"I drove to Edale to do a long trail run around the Peak District. I got to just over mile 13 and found people panicking on their phones near a cliff face.

"A woman had fallen of the edge of Kinder Downfall waterfall, and her family couldn't get to her.

"I scrambled down the cliff faces to get as close as possible but when I got there she was unresponsive and had fallen quite a height onto rocks.

"It was very sad to see her where she was and it was frustrating that I couldn't have done more to help her from where I got to.

"Eventually the coastguard helicopter lifted her away, but unfortunately I had climbed down onto a ledge I couldn't climb back from.

"I then had to wait nearly two hours for the mountain rescue to come back with ropes and a harness so I could then climb back up with assistance.

"The rescue team were amazing – their response was perfect, without them I would still be stuck out there freezing."

Kinder Downfall is a popular beauty spot and well-known waterfall on the edge of the Kinder Scout hill.