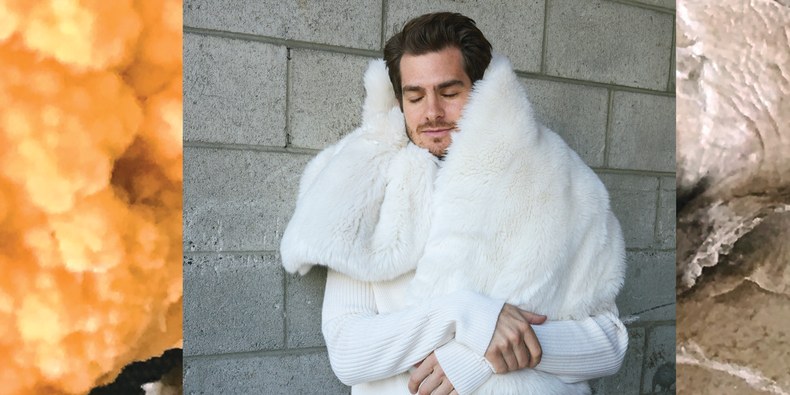 Andrew Garfield has been spending most of his year on Broadway in Angels in America, but this December was supposed to bring his return to movie theaters. That is, until A24, the distributor for his upcoming hipster noir Under the Silver Lake, pushed back the release date once again. The film, which finds the actor stoned and sifting through conspiracy theories, trying to find his missed connection played by Riley Keough, was originally due this summer. A24 made the decision to delay its release date until December 7, after a mixed reception at the Cannes film festival. Now, though, we will have to wait until the calendar year changes to see the film.

Under the Silver Lake is scheduled for an April 19, 2019 release, when we'll finally get to see Garfield's often-high, aimless character's journey and potential unraveling as he goes on an all-consuming search for Keough. "Our world is filled with codes. Subliminal messages from the Silver Lake to the Hollywood Hills," he says in the film's mysterious trailer, which gives little else away. In the two-and-a-half-hour film, helmed by indie director David Robert Mitchell, Zosia Mamet, Jimmi Simpson, Riki Lindhome, and Topher Grace also make appearances.

Garfield didn't have to do too much research when inhabiting the mind of his stoner character. He's expressed his love for weed before, comparing it to acting, saying, “That’s what makes it so beguiling and so addictive. You get to be bigger than what you are. You get to hold more than you do. You get this divine dissatisfaction…I really recommend it!" he joked about weed-laced treats, before jumping into the hard stuff. "Drugs. The word has such a stigma. I can only really take substances if it’s a ritual. I mean, weed, I can smoke because it’s just nice." And, apparently, because it's part of his job—at least for Under the Silver Lake.

As for his next role, Garfield will be starring in Gia Coppola's * Mainstream* alongside Maya Hawke, Nat Wolff, and Jason Schwartzman which is centered around a love triangle, as Deadline notes. Garfield recently opened up about his new and improved process for selecting roles, telling Variety, "My priorities are changing a bit. I think I’m changing, in terms of how I work and in terms of how I live. I’ve been very ambitious for a long time, and I’ve been very single-minded, and I think I got so exhausted during the play that I was like, 'Oh, I want to have more of a balanced life.'" An obsessive search for a crush and an internet-age cautionary tale—what could be more balanced?