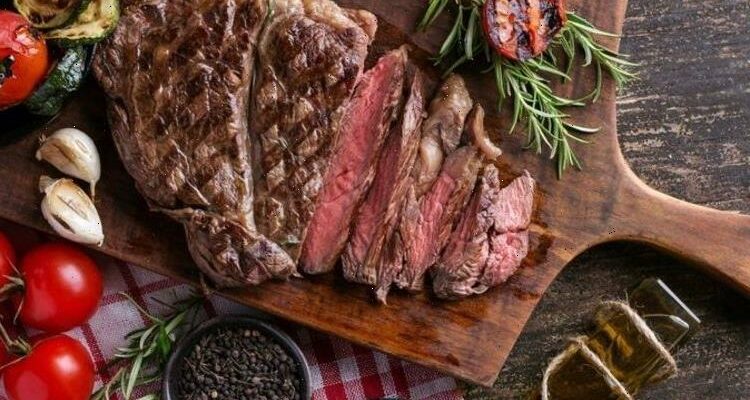 Steak is a popular choice for many Brits, but it has a huge carbon footprint. Scientists have urged consumers to slash their intake of red meat in a bid to save the planet. Food production is responsible for a staggering one-quarter of the world’s greenhouse gas emissions, but some foods have a much larger environmental impact than others. Here’s how the different meats compare.

As world leaders gather for the UN COP26 Climate Change conference in Glasgow, concerns around the world’s harmful appetite for red meat have been raised.

Scientists across the globe have released a joint statement for world leaders gathering in Glasgow this week.

The UK’s Chief Scientific Officer Sir Patrick Vallance has called on Brits to cut back on their meat consumption to combat climate change.

It’s well known that meat products are generally more harmful to the environment than plant-based ones.

This is due to the harmful greenhouse gasses created in their production, but beef is the worst offender of the bunch – here’s how the different meats compare:

Producing 1kg of beef emits 60kg of greenhouse gases (CO2-equivalents), according to research by Our World in Data.

Beef production contributes remarkably more greenhouse gases in the atmosphere compared with other types of meat.

The second-largest greenhouse gas contributor is lamb and mutton.

It takes 24kg of greenhouse gases to produce 1kg of lamb and mutton.

That might sound like a lot, but it is still well under half of what it takes to produce its beef equivalent.

This is closely followed by poultry, as it takes 7kg of greenhouse gases to produce 1kg of poultry meat.

For red meat fans, the picture is darker still when you take into account its methane production.

Pigs and poultry do not produce methane so they have much lower emissions than red meats, such as beef and lamb.

Which is more harmful, methane or carbon dioxide?

When it comes to emissions, carbon dioxide is often the first gas to be targeted, but methane is a far more potent greenhouse gas.

Methane is a short-lived greenhouse gas as it has a very strong impact on global warming in the short term but decays fast.

Carbon dioxide, meanwhile, can exist in the atmosphere for many centuries, which means methane produced through beef and lamb rearing has a high impact on warming in the short term.

This means if the world cuts back its red meat consumption we could see positive steps towards lowering greenhouse gases in a short space of time.

Such fast action is essential if the world hopes to avoid temperatures rising above 1.5C.