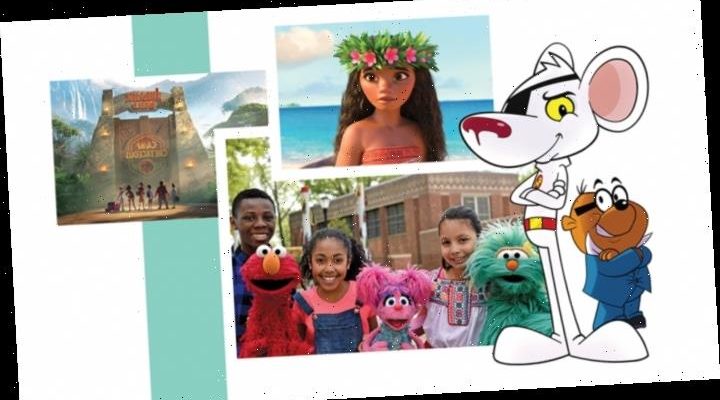 When “Moana” left Netflix on Dec. 20, parents of little kids let out a collective wail of despair on Twitter and Facebook parenting groups everywhere. The phrase “ruined Christmas” was pointedly used in the streamer’s direction — sometimes facetiously, sometimes with the reflected ire of a preschooler who had awakened one morning to find her favorite movie unexpectedly wiped from the universe.

Overly dramatic? Yes. But even more dramatic is the fight for the next generation of television viewers, primed to expect their shows on demand and unlikely to have ever set eyes on a TV listing grid. As families consider which platforms best fulfill their television desires, the industry’s thirst for younger eyeballs (and parental cash) means that the forthcoming direct-to-consumer entertainment turf war is bound to draw blood from the wholesome realm of children’s programming.

In the linear world, viewership figures at ad-supported kid-oriented cable networks are pretty grim. For the week of Sept. 23, viewership plunged 17%, per a recent Bernstein analysis of Nielsen numbers. By a weighted average of live-plus-same day ratings in the 2-11 age range, Nickelodeon had by that point tracked 11 consecutive weeks of share loss and Cartoon Network audiences had shrunk 25% from the same week in 2018.

“The only kids’ networks with good relative performance these days are Nicktoons and Boomerang — a pity they are too small to matter,” wrote Bernstein analyst Todd Juenger.

It’s not that children are suddenly allergic to SpongeBob. (According to Parrot Analytics, Mr. SquarePants and his underwater antics remain the most in-demand children’s content in America.) But as Juenger puts it: The traditional American TV industry is “entering a period of prolonged structural decline,” as viewers migrate to platforms that feature fewer or no ads.

Saturday mornings, years ago relinquished by broadcasters, are now threatening to evaporate from the grip of cablers as well. This will prove to be a fertile area for existing streamers, as well as the soon-to-launch over-the-top offerings from Apple, Disney and WarnerMedia, among others. All of them are hungry for subscribers and eager to keep them shelling out monthly dollars.

Children’s fare is “incredibly important” to entertainment platforms, says Sesame Workshop president of media & education and chief operating officer Steve Youngwood. “The broadest services with the greatest [number of] subscribers are going to be the ones that have something for everyone in the family — and kids are one of the biggest drivers of usage in the family.” Netflix, for one, is well aware of how vital children are to its health. Approximately 60% of its subscribers watch kids shows and movies with regularity, according to a source familiar with the matter. And their appetite for children’s programming is “huge,” says DreamWorks Animation chief creative officer for television Peter Gal, who has worked extensively with the service.

“They’ve made no bones about the fact that they’re trying to be all things to all viewers and have everybody’s favorite show, and that means every kid’s favorite show as well,” he tells Variety.

DreamWorks first struck a deal with Netflix in 2013, with the streamer licensing more than 1,000 episodes of TV in one fell swoop and extracting better than 300 hours of original, first-run content from the studio. Today DreamWorks continues to make new programs for Netflix, including “Kipo and the Age of Wonderbeasts” and “Jurassic World: Camp Cretaceous,” which debut in 2020. The studio also struck a multiyear deal with Hulu last year, and is producing shows for Amazon, NBC’s Universal Kids and streamers that Gal cannot yet reveal.

Originals and exclusive content can translate to generational loyalty if these platforms are lucky. Apple TV Plus, vying for kid viewers, has “Snoopy in Space” and two other kids shows in its lean arsenal. And CBS All Access is welcoming 1,000 episodes of children’s programming to its existing 12,000-plus episodes on the service, and licensing two original kids shows, DHX Media’s “Cloudy With a Chance of Meatballs” and Boat Rocker’s new “Danger Mouse.”

“We’re pretty optimistic that it feels like the right way to go,” CBS Interactive president and chief operating officer Marc DeBevoise tells Variety. “We’ve seen other services do things similarly and have it pan out for them, so that’s why we’re taking the step of getting into that business and into that strategy.”

All Access has an average age of 44, with two-thirds of its viewers in the 18-49 demo, so odds are that a solid portion of its 4 million-or-so subscribers are parents. The goal, then, is to “super-serve that audience with more content that we think is relevant to them to keep them engaged in the service,” says DeBevoise. For CBS All Access, children’s shows are more of a retention than an acquisition play. But others are being more aggressive in their pursuit.

Disney Plus, of course, is the giant waiting in the shadows, the rancor eager to take on contenders in Jabba’s pit. Industry folk consider it a given that the platform, with all the Marvel and Pixar and “Star Wars” movies anyone can handle, as well as spinoffs and remakes like “Monsters at Work” and “Lady and the Tramp,” will do well with families.

The question, some say, is how much cannibalism it will have to engage in to succeed.

“Disney wants Disney Plus to be successful, but I think they’re always cognizant of the fact that you’ve got the Disney Channel,” says Pivotal equity analyst Jeff Wlodarczak. “You don’t want to create something that accelerates the decline of pay TV significantly faster than it’s going right now.”

The problem is that if Disney creates a clear alternative to Disney Channel and its other core channels, and it’s charging a cheaper price for Disney Plus, “that’s not good,” Wlodarczak says. “Because last I checked, Disney was generating, on average, before advertising, almost $20 per pay-TV customer in the U.S. So you create something that people start migrating to a lot faster — there’s nobody that monetizes the current pay-TV environment more than Disney.”

But profitability is not the priority for Disney Plus at the moment. The streamer has said that operating losses are expected to peak between 2020 and 2022 before entering profitability in 2024. Disney hopes that occurs with a projected 60 million to 90 million subscribers in tow.

HBO Max, meanwhile, appears to have Disney Plus in mind as it looks to attract households, stuffing its own service with 50 years’ worth of “Sesame Street” plus five new seasons of the beloved show starting in 2020. (PBS Kids will continue to air new seasons for free.) WarnerMedia’s upcoming streamer will also feature several “Sesame Street”-related programs, including a “robot-animation style” “Sesame Street” spinoff and a fresh season of “Esme & Roy” as well as a docu-series, another new animated series, annual specials and a talk show hosted by none other than the red monster himself, “The Not Too Late Show With Elmo.”

In the midst of this emerging class of streaming services, there’s no telling whether the yanking around of intellectual property will annoy even more parents. HBO Max’s gain, after all, comes at HBO’s expense, and while Big Bird is arguably a better fit for the something-for-everyone platform, there’s likely a contingency of premium cable subscribers who may yet lament the loss. Amazon Prime Video and Hulu subscribers can expect any lingering episodes of “Sesame Street” to migrate off those services by the fall of 2020, according to Sesame Workshop’s Youngwood.

Netflix’s revolving door of content may matter less as it creates originals. Netflix VP of original animation Melissa Cobb says that “The Boss Baby: Back in Business” and preschool show “The Mighty Little Bheem,” both originals, are two of the service’s most popular kids’ shows globally. “Bheem” is a series from Indian creators but appeals across territories, which speaks to Netflix’s international ambitions and considerations.

“We’re looking for the top creators of any country we’re in who can create content that can resonate both with the local audience but also globally,” Cobb says.

Still, no doubt to the relief of some parents — those who did not cave and buy a digital copy off Amazon, at least — “Moana” will reappear online in November.

Except this time, it’ll be on Disney Plus.