Justin Long wore multiple hats for his directorial debut on Lady of the Manor, which he wrote and created with his younger brother, Christian Long.

The actor, 43 — best known for roles in Dodgeball, Accepted, He’s Just Not That Into You and more — was inspired by “odd couple setups” and films such as What About Bob? and Planes, Trains and Automobiles while writing the script.

“Our intention was to make more than beyond the supernatural comedy,” he exclusively told Us Weekly. “And so we had this idea that we’ve been kicking around, and it never really came to fruition. We didn’t know how to make it work. It ended up being kind of too tragic to work as a comedy. But it was kind of like a comedic version of Psycho where instead of being a sinister presence, Norman Bates’ dead mother is more of an annoying presence, where she just bugs him and she’s still overbearing. We thought there’s a lot of value and there’s comedic value in that.” 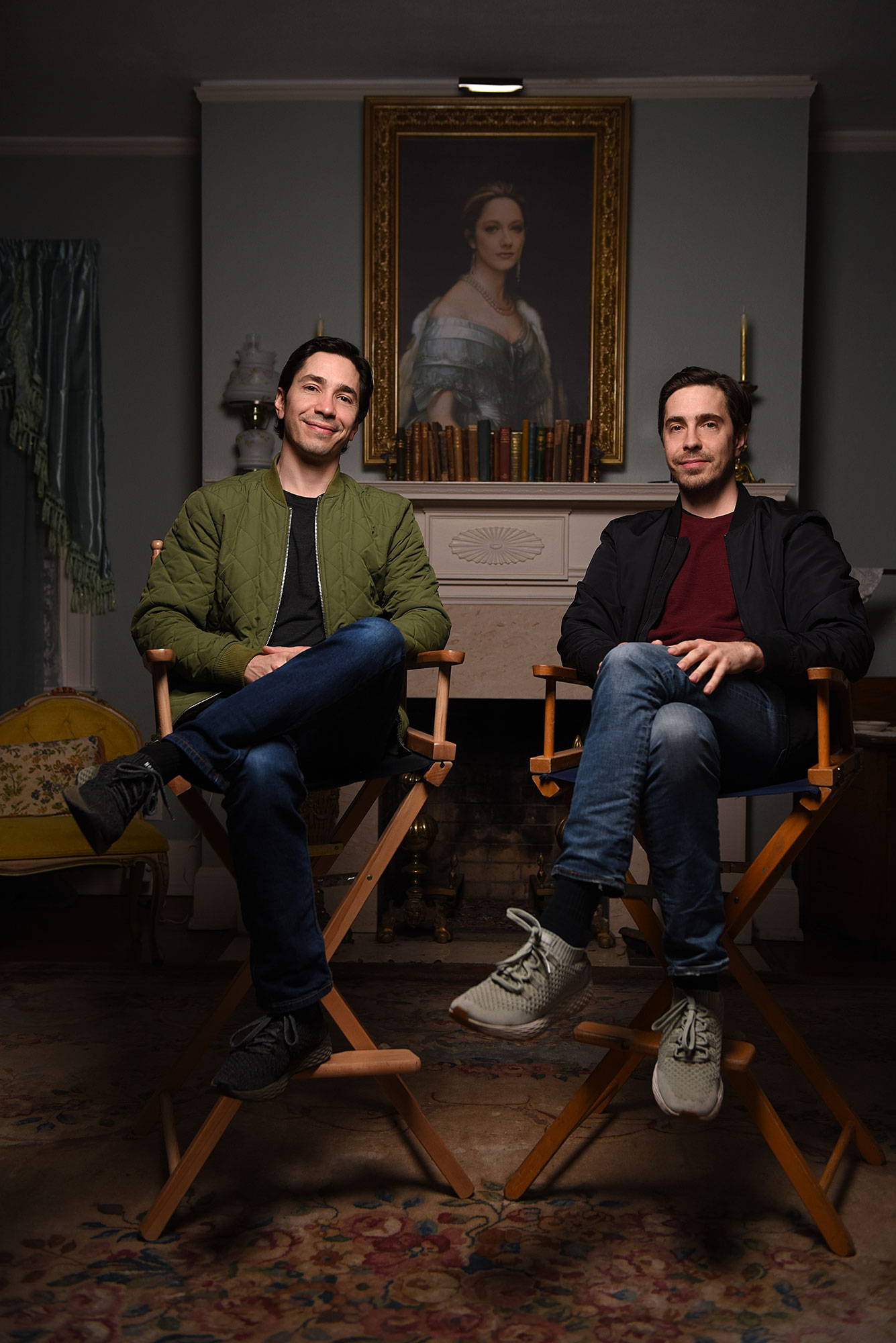 The brothers “married” those ideas and set out to create a comedy specifically for women. In Lady of the Manor, a Southern belle named Lady Wadsworth (played by Judy Greer) comes back as a ghost to haunt crass, pot-smoking Hannah (Melanie Lynskey), and tries to change her unladylike ways. While Hannah gives tours at Wadsworth Manor, she’s also introduced to Tanner Wadsworth (Ryan Phillippe) and Max (Justin).

“We’re not reinventing the wheel, but we certainly weren’t used to seeing two women in a movie that was more of like — that’s why they call it bro comedies. But we thought, like, ‘Well, I know women who laugh at farts and, like, dick jokes.’ It seems a little strange to be mansplaining the lack of female comedy. But we just thought, God, we know so many good actresses,” the actor joked to Us. “So we reached out to two of our favorites. I still can’t believe they agreed to do it because Judy and Melanie are considered very classy actresses. But I also knew how funny they were.”

Stars Reveal What They Took From Set

The “Life Is Short” podcast host and Lynskey, 44, previously worked on the 2017 drama And Then I Go together, while Greer, 46, appeared in one of his Mac commercials.

“I used to look forward to just hanging out with Mel so much in between takes. She was so naturally funny. And Judy, of course, everyone knows how funny she is. But they really were game and really took to it,” he added. “I thought they might have some issues with some of the humor, but if anything, they wanted to lean into it. They were like, ‘Oh yeah, more farts, more dick jokes.’ I don’t think they get to do stuff like that often. So they had so much fun, and it was such a blast to just watch them.” 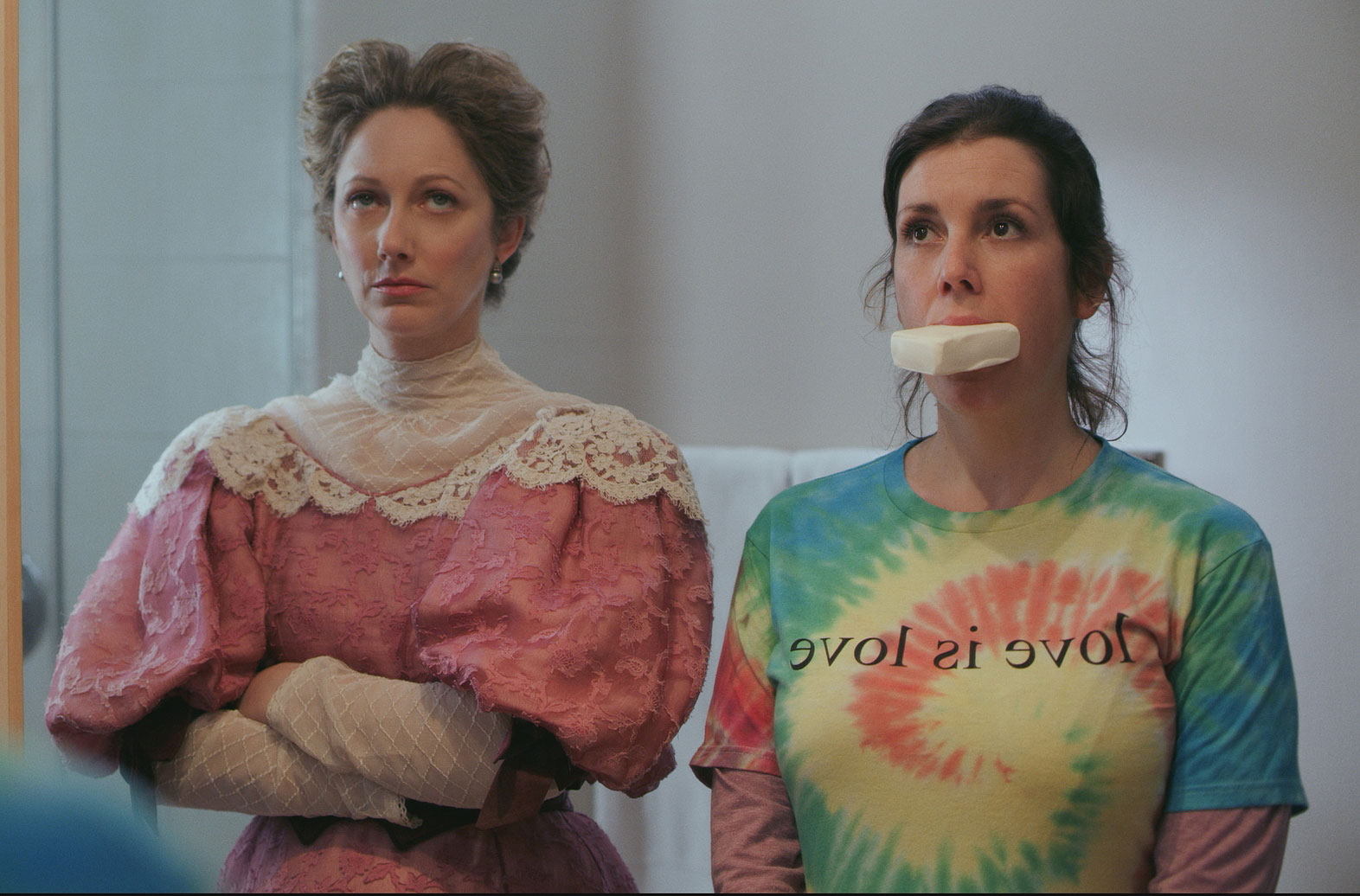 The Halloween Kills star and Lynskey’s characters took part in multiple hilarious montages during the film. While trying to teach her to be a proper lady, Lady Wadsworth made Hannah bite on soap if she cursed and even told her how to pass wind in a respectful manner.

“I’m sort of ashamed to say this, but I was way too proud of the moment. Christian and I, we grew up next door to this very sweet, older, single lady who would come over for dinner often. And she was very old-fashioned with her approach to etiquette. And I remember once she just went into the other room, and we were kind of confused in the middle of dinner. And I think it was because she had to fart and pass gas. And we always thought that was so funny. The idea that everyone farts, of course, but that there’s an etiquette about it. There’s a proper way to do that,” Justin explained to Us of writing in the joke. “So I always liked that scene where Melanie’s learning that and the ghost teaches her. She doesn’t use the crass term like fart, but she says if you must break wind, or however she says it, you must go into another room.”

For Justin, watching Greer and the Togetherness alum bond offscreen on the Florida set was an added bonus. “It made us emotional because there’s no way to write that. There’s no way to account for that kind of chemistry. I’ve experienced this as an actor. Sometimes you show up and it’s not there. And you have to force it a little bit,” he told Us. “So we got really lucky that we saw day one, how much Melanie and Judy were enjoying each other too off camera. They were just making each other laugh. And we were like, ‘Oh God, this thing might work.’ It was so thrilling.”

The Going the Distance actor might continue to work behind the camera moving forward. He and Phillippe, 47, have also already talked about working on another project together. 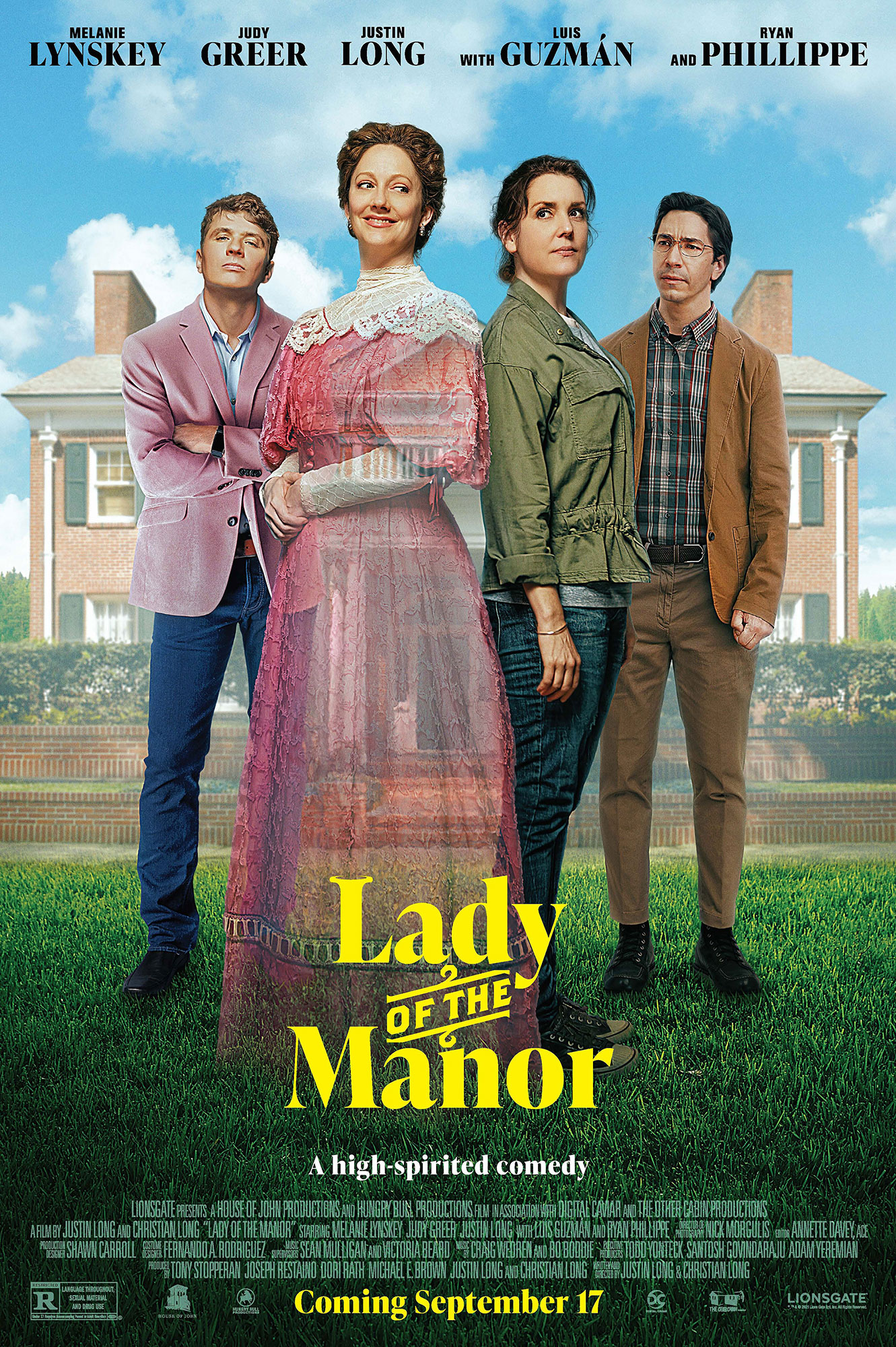 “We would love to do another movie. We have an idea for something because it was so fun and we learned so much,” he told Us of himself and Christian. “We don’t have crazy aspirations, I don’t think as filmmakers, other than to make things that people might enjoy, that might make people laugh. And that’s what we like about this movie.”

As for what else he’d like to accomplish? “I’d like to have kids one day,” he noted, joking: “I know that’s a big project to work on!”

Lady of the Manor is now in select theaters, on Apple TV and everywhere you rent movies. It’s available on Blu-ray and DVD on Tuesday, September 21.