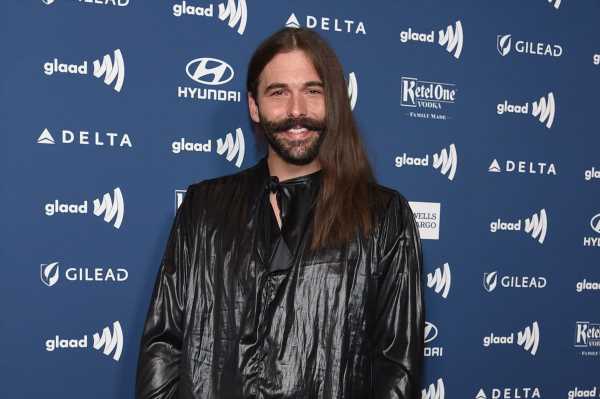 On Sept. 25, Queer Eye star Jonathan Van Ness endorsed Elizabeth Warren due to her health care plan, in both interviews and on social media. During his Getting Curious with Jonathan Van Ness podcast, JVN unintentionally revealed to acting President and CEO of Planned Parenthood, Alexis McGill Johnson, that he’s supporting Senator Warren for the Democratic presidential nomination. Later, he doubled down on his endorsement on Twitter, addressing Warren as "fierce future president." In a New York Times interview published on Sept. 21, Van Ness revealed he’s HIV-positive — a fact he also discussed in his memoir, Over the Top: A Raw Journey to Self-Love, which he released on Sept. 24. Although JVN explained to NYT that he’s currently healthy, he explained in a follow-up tweet that a recent medical expense led him to endorse Warren for President.

He wrote: "The moment I knew I was endorsing @ewarren was last month when I misplaced my HIV meds. It cost $3500 to replace them out of pocket with "amazing" plantinum [sic] level insurance. Healthcare shouldn’t be for profit ever, it’s a human right." He also clarified he’s "on literally ONE daily pill to manage my HIV infection," in another post.

He further elaborated on how his medication issue led him to support Warren, in a Sept. 25 BUILD Series interview with Yahoo Lifestyle. The 32 year old explained that he’d misplaced his medication while traveling between Philadelphia and New York City — prompting him to make a nighttime pharmacy visit so that he didn’t miss a dose. After spending an hour talking to his insurance company, he said his bill was $3,500, an amount that he said he wouldn’t have been able to pay by himself not long ago.

"Three years ago, that would have been calling my mom in the middle of the night, calling everyone of my family to break the Venmo thing to get enough money into my phone," he said in the Yahoo interview. "How do you even do that? What if you don’t have Venmo? . . . What if I hadn’t misplaced my pills, and I was going to not have them for 10 days or 15 days? That is a big f*ckin deal. That’s how you become resistant to your medication."

Warren’s health care plan supports single-payer Medicare-for-all, with the senator having recently called it "the best way to give every single person in this country a guarantee of high-quality health care," per Vox. Also on Sept. 25, Warren called JVN to thank him for his support, and he documented the conversation on social media. "When the future President calls you," he captioned his Instagram video post. "For my first IGTV video ever here is @elizabethwarren calling me after my endorsement today. Holy Sh*t."

During the call, Warren told a visibly excited JVN that she’s "glad we’re going to be in this fight together side by side" and that she loves his endorsement as they "fight for basic human rights." JVN expressed his disbelief that she called him and that he’s excited to be "shoulder to shoulder" with her as well.

"I’m really good at getting rid of stigma, honey — whatever I can do to destigmatize the idea of health care for all," he told her, also noting that he’d decided to join Team Warren following the September Democratic primary debate.

JVN’s intention to destigmatize LGBTQ+ issues — along with several of the current Trump administration’s policies — factored into him publicly sharing his HIV status. “When Queer Eye came out, it was really difficult because I was like, ‘Do I want to talk about my status?," he said in his Sept. 21 NYT interview. "And then I was like, ‘The Trump administration has done everything they can do to have the stigmatization of the LGBT community thrive around me. . . . I do feel the need to talk about this."

His support for a progressive health care policy like Warren’s seems to be a change in his views on the need for centrist policies. Last year, JVN received backlash for comments to that effect. "It is so important for the left to not go too left or we are done for," he tweeted in Aug. 2018. In a separate tweet, he also wrote, "Being able to compromise is what’s missing from both sides of the American political situation & the sooner we all get to a place of mutual understanding the sooner we will get out of this mess."

And JVN seems to believe that Warren is the best person to get the job done.