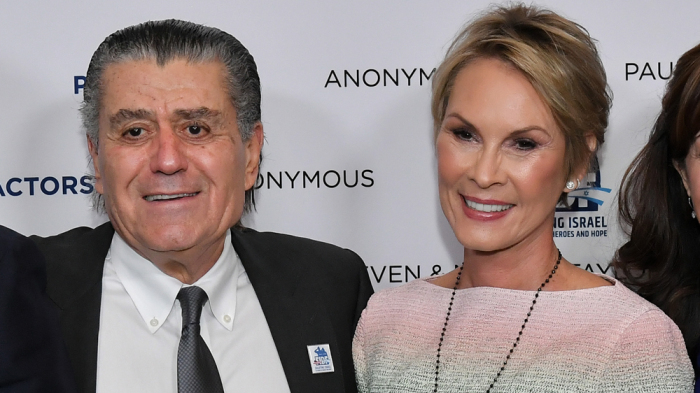 Haim and Cheryl Saban’s $50 million donation has landed them their name on the Academy Museum of Motion Pictures building on Miracle Mile in Los Angeles, but the billionaire philanthropists’ contribution to the project almost didn’t happen.

During Tuesday’s unveiling of the restored exterior of the new Saban Building (formerly the historic May Company department store flagship store) on Wilshire Boulevard, Haim recalled how Netflix boss Ted Sarandos invited him to dinner one night. The chairman-CEO of Saban Capital Group suspected that the Netflix boss was probably going to hit him up for a donation of some sort because he told him he was going to sit him next to Leonardo DiCaprio for the meal.

When Sarandos explained he was looking for funding for the museum, Haim quickly dismissed the idea, saying that he and Cheryl’s philanthropy was aimed at more personal issues, including health care and children’s hunger. “I said, ‘We don’t know from museums,’ so please don’t sit me next to Leonardo DiCaprio,’” Haim said. “He didn’t, so I thought, ‘I’m safe. I’m out.’”

And that was that. At least that’s what Haim thought.

But then Bob Iger called and asked Haim to breakfast, where the Disney chief said the Sabans could have their name on the museum’s main building for a $60 million donation. Haim went home to debrief with Cheryl. “She goes, ‘We’re doing this,’” he recalled. “I knew right there and then we were doing this. There was no way around this one. I love saying, ‘Yes, dear’ to my wife.’” (The donation ended up being $50 million.)

Haim has no regrets, especially when because the building also reminds him of his late mother, who he said always insisted on going shopping at the May Company when she would visit Los Angeles from Israel. “She supported the Los Angeles economy in a very significant way,” he cracked.

Haim also quipped, “Ted, I’m sorry I said no to you and yes to Bob, but Bob bought my company for $5.2 billion.”

The Academy has raised $281 million of its goal of $388 million for the museum, which has been under construction since early 2016. It’s scheduled to open in late 2019.

Tuesday night’s event took place across the street from the museum at the Petersen Automotive Museum. Tom Hanks was on hand to host the lighting of the Saban Building after he announced that Barbra Streisand and NBCUniversal vice chairman Ron Meyer and his family recently made significant contributions to the museum.

L.A. council member David Ryu presented proclamations to the museum as well as to the Los Angeles Conservancy.