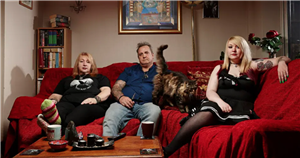 Googlebox has been on our screens since 2013, giving us various, and often hilarious, insights into homes up and down the country.

We’ve gotten to know the characters on the hit Channel 4 show in the most intimate of settings; while we are sat on our sofas, and they are sat on theirs, all watching telly together.

There have been many different families that we have grown to love, but some have exited our screens, and we of course miss them.

One such family is the Woerdenwebers, who where known as the “goth” family on the show.

We found out what they are up to now…

Who are the Woerdenweber family?

The Woerdenweber family are based in The Wirral, Liverpool.

The family is made up of German-born Ralf Woerdenweber, his British wife Viv and their daughter Eve, 26.

The trio were originally joined by Eve's then-boyfriend, who was affectionately known to fans as 'Silent Jay' owing to his continuous lack of dialogue while appearing on the hit show.

However, since leaving the show, Jay insists it was all just clever editing.

Jay told The Sun: "I get recognised as that guy who never speaks — and most people get shocked by how much I talk. I am generally quite talkative.

"They just edit the bits where I talk out."

The young couple broke up and so the family continued to film without him, however they remain friends.

Where is the Woerdenweber family now?

Since leaving the show, Ralf works for Bosch and Viv runs a shop stocking everything 'goth' and it is called Twilight.

However, on the floor above, Eve has her state-of-the-art tattoo studio Pretty Inked.

Speaking to Wirralgobe.com, Viv said: “We have attracted quite a bit of attention from people who recognise us from the TV show and it’s definitely going to be good for business.

“However, I like to think people will also come in for what we’re offering at Twilight and Pretty Inked.”

The family have suggested on social media that they would love to return to the show.

Additionally, Eve got engaged in 2020 to her boyfriend Alex.

Meanwhile, since the show, Jay has been working at Baa Bar Fleet Street in Liverpool.