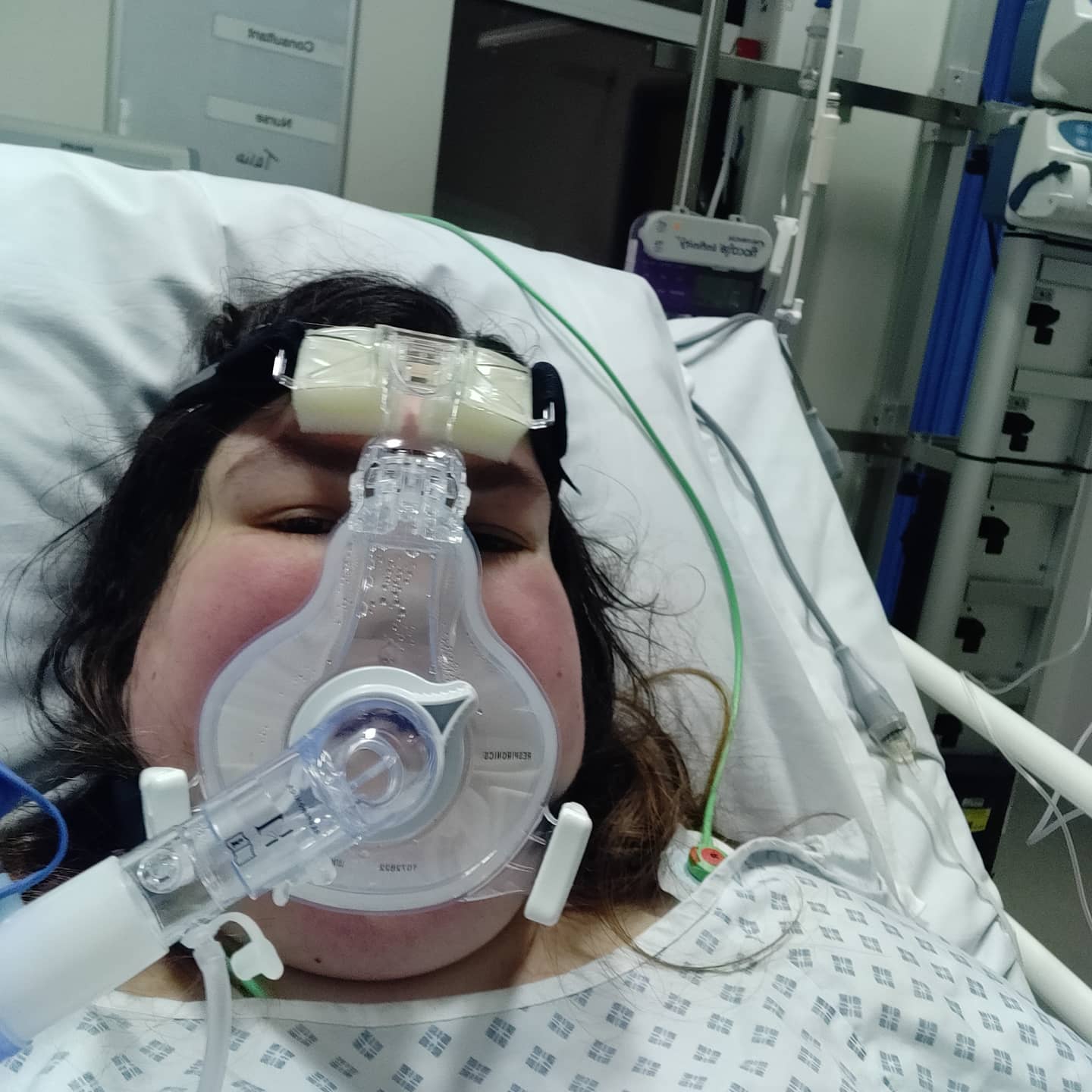 As a teenager, I was diagnosed with a chronic health condition called lumbar disc prolapse.

The bottom three discs of my back have partially collapsed, causing damage to my sciatic nerve and episodes of severe pain.

But as it is ‘invisible’, I was often made to feel like I didn’t fit into either category of ‘able-bodied’ or ‘disabled’. In the past I have been told I am whining about ‘non-existent’ pain and been labelled an attention seeker who should be ‘thankful’ my condition is not life-limiting.

Then February 2021 hit and my hidden disability became very much physical. I was admitted to hospital with Covid-19.

Placed straight into intensive care, I was given oxygen via a CPAP machine but thankfully avoided being ventilated. But oxygen deprivation to my organs meant, as I recovered from Covid-19, I was left with another bigger challenge: walking.

After a month in hospital I was discharged but needed round the clock care. I had to live with my sister and her family, with daily home visits from district nurses and a rehabilitation team.

Now, I see a neuro physiotherapist once a week in hospital, who described my situation as ‘between someone with a stroke and someone with MS.’

I’m retraining my brain to do the simplest of tasks such as walking, using a computer and even lifting my legs, while fighting my weakened body to physically carry them out.

With house adaptations, visits from carers and numerous walking aids, I have been able to manage. But soon I noticed my newfound lifestyle came with a change of attitudes and behaviour from those around me.

People have become more understanding of my capabilities and need for additional help with even the more mundane tasks, and cheerleaders for smallest of milestones achieved like climbing up a flight of stairs.

Yet my feelings of independence started to diminish. I went from covering sporting events as a journalist, to sitting indoors unable to walk more than 20 metres without extreme muscle weakness and fatigue.

When I first began using a wheelchair, strangers would smile and say ‘hello,’ holding my gaze long enough to make sure that I could sense their sympathy – a kind gesture that soon grows tiresome. All I want is for people to see me and not the chair, after all I am a grown adult and not a baby to coo over.

Mobilising on crutches, people assumed I had hurt my leg or was recovering from an injury. Every conversation started the same: ‘What happened?’ But that’s just another problem people with impairments face.

We are constantly expected to explain what’s ‘wrong’ with us. Questions feel like interrogations, requiring answers that seek validation. Why should we be demoralised by being quizzed over and, at times, asked to prove our disability to appease others?

But it was an eye-opener for me that a previously judgemental society seemed to become passionate and helpful.

I felt less scrutinised when I had a visible disability than an invisible one because when people can see it they are less ‘suspicious’ about it being genuine. But the stigma around disability capability remains and I was worried about my return to work in June.

Watching the Sydney Olympics at my grandparents’ house as a child captured my heart and ambition to become a sports journalist – I love reporting on amazing stories of triumph, overcoming injuries and inspiring sportsmanship.

But having lived with both a hidden and visible disability, I know first-hand the discrimination associated with being disabled, particularly in the workplace.

I’ve often feared I would be denied a job on grounds of assumed incapability and, when I have been hired, I felt I only secured employment purely because I tick a diversity box. Thankfully, my current workplace has always been brilliant, but I was still wary of how my new access needs would be accommodated.

The IPC states that 85% of disabled people globally live in poverty – and 50% are unemployed. But that doesn’t mean we are inadequate employees.

One thing that kept me going through my recovery was my chance to make a 2017 Wimbledon Roger Federer-style comeback. Thanks to a determined physio and incredible workmates, I made it.

In the months prior to attending this year’s Wimbledon, my boss constantly checked up on me and established a plan by making everything more accessible – without shunning or hiding me from everyone else.

For me, returning to work was a big step, but showed how possible it was, especially when employers are encouraging and willing to adapt their environment – giving us the platform to show our potential in the workplace.

Although my role this year was more office-based, the opportunity to return allowed me to obtain new skills and see the Championships from a new angle.

As I became more comfortable mobilising around the grounds I was able to complete similar broadcast roles as previous years with more confidence.

Afterwards, I was asked by the broadcast co-ordinator how I found Wimbledon and what adjustments could be put in place to help make the event more accessible and supportive of those with disabilities, showing positive signs of progress.

This was the first time ever that an employer showed eagerness to make the workplace adaptable and more inclusive.

I’m hopeful that this past year has seen a turning point in attitudes to disability in the workplace.

With the launch of the Paralympics, international organisations have come together to unleash WeThe15 – a global human rights movement for the 1.2billion people with disabilities who make up 15% of the world’s population.

Led by the International Paralympic Committee (IPC) and International Disability Alliance (IDA), the decade-long campaign aims to end discrimination towards those with disabilities via campaigning for disability visibility, accessibility and inclusion.

It’s long overdue and it feels fantastic to see these issues put centre stage – I only hope they will be kept there. If world-class disabled athletes struggle in the face of adversity then you can only imagine the obstacles met by the 15% worldwide.

The Paralympics represent fierce determination to overcome some of life’s biggest challenges and the desire to come out on top.

For me, the Paras are a reminder of how far I have come. I may not win any gold medals, but I can still achieve the highest peak in my own career.

I want to be a respected part of society and the workplace without feeling like I’m a box-ticker for ‘inclusivity’ – and with campaigns like WeThe15 behind us, I hope it won’t be something disabled people have to fight for much longer.