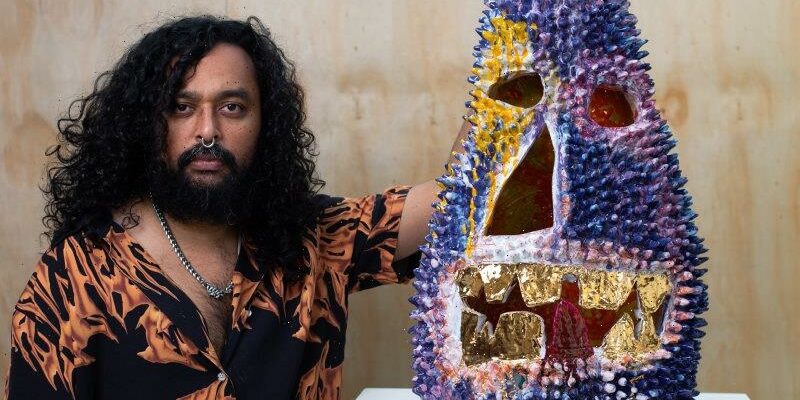 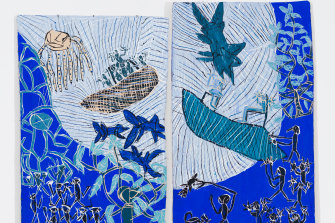 Like all businesses in Sydney, the commercial galleries were quick to open their doors last week. Private and online sales have continued during lockdown, but it must be reassuring to see flesh-and-blood customers again.

My first stop was Dhambit Mununggurr’s Durrk – I can fly, at the Roslyn Oxley9 Gallery. Like so many talented Indigenous artists, Dhambit has gone from being a virtual unknown to an accredited superstar in the blink of an eye. The crucial factor was her inclusion in the NGV Triennial 2020, where her work stood out in a display dominated by well-known international artists. 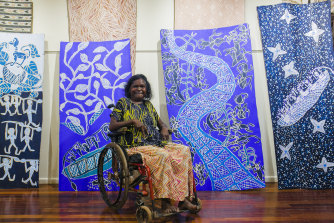 It wasn’t long ago that Indigenous artists were viewed as hopeless amateurs in a field controlled by professionals. If this notion has now been turned on its head it’s almost certainly because of the wave of identity politics that has swept through our cultural institutions. It would be great to imagine it was because everyone suddenly recognised the intrinsic power of this work in comparison to all those expensive, arty commodities they’ve been buying.

With Dhambit, who hails from Yolngu territory in the Gulf of Carpentaria, it requires a mere glance to establish the originality of her work. She is the only artist who has ever painted barks and poles in an extraordinary shade of cobalt blue. The reason this is so unique is that the art of the Yolngu is controlled by tightly policed codes and conventions. Within this small community, it’s simply not possible to pick up a brush and paint with any old colour. Artists are limited to the traditional ochres, meaning a palette of reddish brown, yellow, black and white.

Dhambit has been given special dispensation because of the injuries she received in a car accident that have made it impossible for her to mix the ochres. She was given the freedom to use paint from the tube and chose to work with an eye-catching shade of blue. 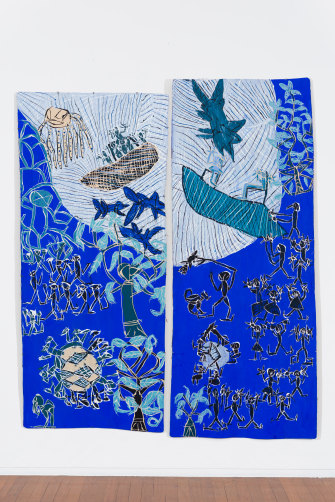 The blue is an overwhelming force, but it’s no gimmick. There’s an impressive degree of colour modulation, a consistent dynamism in the mark-making, and a willingness to push beyond the boundaries of the traditional stories associated with the artist’s clan. One work is called My grandfather and the butterflies, mingling a childhood memory with a reference to the spirit world. Another has the mind-boggling title: Welcoming the Refugees/Scott Morrison and the Treasurer. The picture allegedly shows these two lofty personages in a canoe that the Yolngu are pushing out to sea. It sounds like an excellent idea.

There’s a consistent dynamism and a willingness to push beyond the boundaries of the traditional stories associated with the artist’s clan.

With Dhambit’s exhibition, there’s a simple equation between form and content. One imagines that no sooner has she decided on a subject than the images begin to appear. Many artists would envy such spontaneity, but for Karl Wiebke, showing eight new paintings at the Liverpool Street Gallery, every form, every brushstroke, is the result of the most intensive thought. 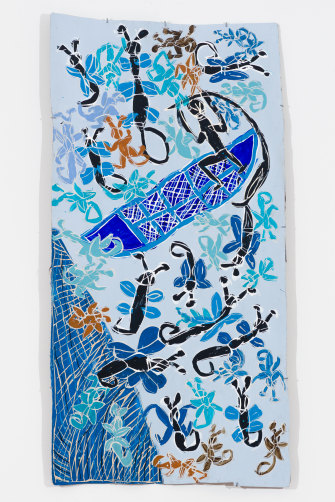 When I say “thought”, I might just as well say “the absence of thought”, as Wiebke has tried to allow his subconscious mind to dictate the way a painting evolves. But as anyone who practises meditation or yoga knows, it takes a lot of time and effort to turn down the volume of the conscious mind and find what lies beneath. It’s a different kind of thought, but the creative faculties are fully engaged. 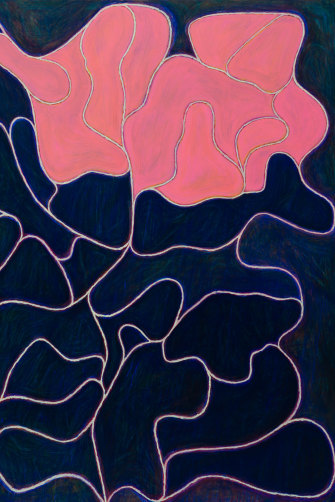 Odd one out, work 8 from Karl Wiebke’s series Twenty One (1-8)Credit:Liverpool St Gallery

Wiebke apparently aims to make a painting so completely abstract it doesn’t resemble some part of the physical world. The fact that this is virtually impossible hasn’t prevented artists from making regular attempts. Each of the eight paintings in this show has a generic title: Twenty One (1-8). Each of them has been extensively reworked, even though the actual surfaces are flat, not textured. There are family resemblances between numbers 5, 6 and 7, but the other paintings are in utterly different styles, the odd one out being number 8, which is divided into distinct areas like a jigsaw puzzle or a map. 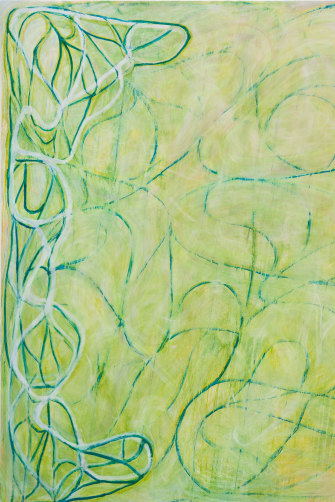 For the most part, these paintings are organic in inspiration, filled with lines that writhe around the canvas, overlapping, rising and falling. It’s as if Wiebke wants to suggest the process rather than the finished artefact. The pleasure for the viewer lies in the complexity and intensity of his efforts.

The monastic discipline of Wiebke’s works seemed a distant memory when I walked into Ramesh Mario Nithiyendran’s The Guardians at Sullivan + Strumpf. The ground floor gallery is crowded with small-scale ceramic and bronze sculptures – a riotous assembly of shiny, brightly coloured beasties and gargoyles grinning, leering, staring goggle-eyed back at the viewer. 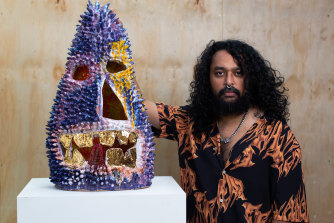 It’s a familiar performance from Nithiyendran, who never holds anything back. The expressionist frenzy of the sculptures sits strangely with the fact that they have been baked in a kiln – a process that requires the utmost care and precision. The conceit is that these pieces are guardian figures that mimic the magical animals and demons employed to scare evil spirits away from temples and public places. In a world riven by a pandemic, a climate crisis, and escalating political madness, he seems to know his market.

Nithiyendran is a polarising artist whose work generates extremes of fandom and distaste, but even his detractors have to acknowledge his powers of invention and the free spirit that lives within these homemade idols. The only sombre note in a typically over-the-top display is struck by Double-sided chrome head, a dull, lead-coloured piece that sits within the group as if it were the chief of the tribe or the village elder. The head acts like an anchor that keeps everything grounded. 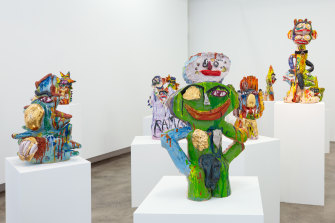 By way of contrast, when I visited last week, the upstairs gallery held only a single large painting by Michael Zavros, showing a garden at Versailles with a hedge cut into a Z shape. By this weekend Zavros’s show should be fleshed out with other works. Put these two exhibitions together and even the most open-minded viewers will find their personal tastes put to a severe test. 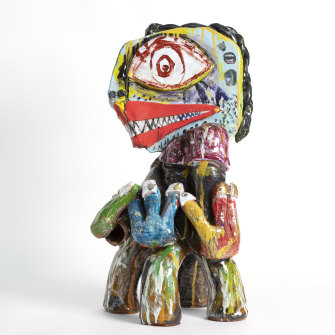 The lockdown obviously allowed some artists time to pore over their archives. Helen Eager’s exhibition The Drawing Room at Utopia Art is a survey of four decades of graphic work, starting with still life studies drawn in pen and progressing to the cool, geometric abstractions of the present day. In her fastidious way, Eager even commissioned a set of specially coloured plane drawers in which early drawings are displayed, adding bulk to the representative pieces on the walls.

Eager’s path to abstraction has been far less tortuous than Wiebke’s. One can see how a window, a chair, a teacup or the rectangular form of a television set have been simplified and transformed into the abstract elements of a composition. Little by little the figurative references fall away until Eager is left with only the geometric shapes, which she begins to explore as an endless series of variations. This is exemplified in Prototypes 2017-18, which consists of 35 small, coloured pencil studies on a single panel, featuring sharp-edged irregular forms made from combinations of triangles. 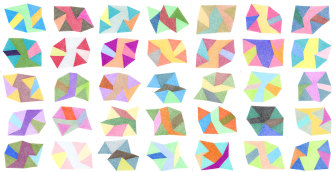 The severity of the geometry is tempered by soft, swirling marks made by the coloured pencils, which endow each configuration with a subtle sense of volume. Eager’s patience, and the satisfaction she clearly derives from ringing the changes on a restricted set of shapes, suggests that artists probably suffered less than most people did from Sydney’s long lockdown. Why worry about what’s happening in the street outside when you’re happily immersed in a world of ideal forms?