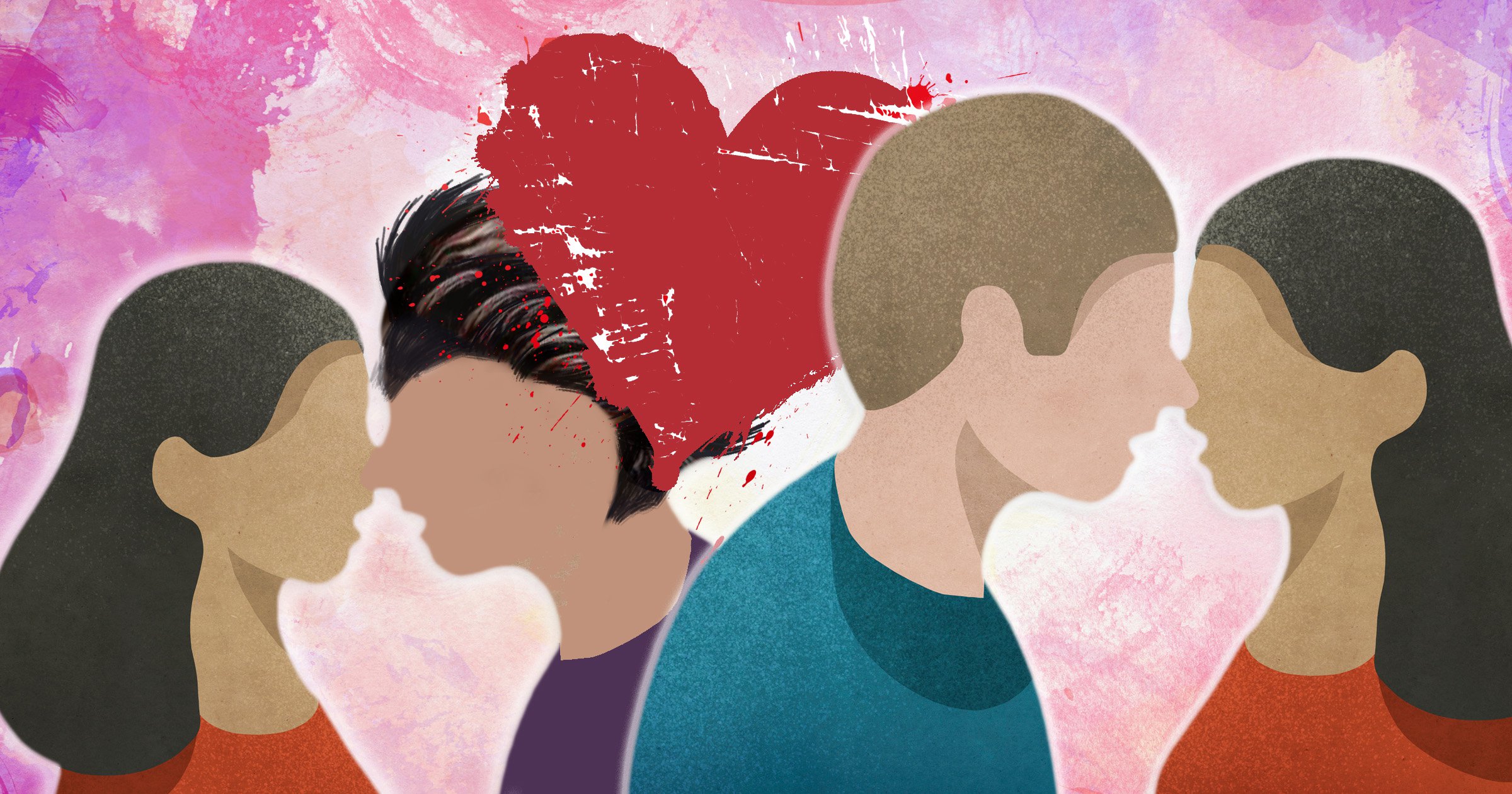 You may have heard of partner-swapping, otherwise called swinging, where people swap sexual partners – or couples engage in group sex.

In fact, swinging is the topic on this week’s Smut Drop podcast episode – where we chat to Milo, the founder of Val Rue: a swinging, open relationship site that allows people to host their own private parties.

Milo says: ‘I think swingers need to be celebrated because, in the world we’re living in at the moment, 95% of people are living a lie.

‘A lot of people know exactly who they are and what they want. But they’re scared about what society will think about them.’

Milo adds that he thinks we’re going to see a massive shift over the coming years, with swinging becoming more mainstream.

He adds: ‘Certainly in the last two years swinging is in the news, open relationships are in the news, every single day on loads of outlets.

‘I think over the next three to five years, way more people are going to be doing it – it’s becoming more socially acceptable.’

So perhaps you’re familiar with swinging, but have you ever heard of ‘soft swinging’?

Soft swinging involves non-penetrative sexual relations outside of a marriage or primary relationship, as opposed to swinging or a ‘full swap’ where two or more couples will exchange partners and have sexual intercourse.

It relies on the basis that you are in a non-monogamous or open relationship where all individuals involved have agreed not to have intercourse with anyone other than the partner within their primary relationship.

People within the swingers community use the term ‘soft’ to explain the act of switching partners to kiss, touch or have oral sex.

Penetrative sex is often idealised in hetero relationships, which could explain why some people refer to any other sexual act outside of full penetration as ‘soft’.

Why soft swinging can be tricky in relationships

The concept of has come under scrutiny after a Mormon influencer on ‘MomTok’ revealed that she and her husband were involved in a ‘soft swinging’ community during a recent livestream.

Taylor Frankie Paul, a 28-year-old mum-of-two with 3.5 million TikTok followers, caused controversy after sleeping with a member of the community without her husband’s knowledge.

Back in May, Taylor hosted a TikTok live stream, telling viewers she and her husband Tate were in an open marriage and sometimes invited other partners into their relationship. She noted, however, that the individuals involved agreed not to have sexual intercourse with anyone other than their partners.

‘I guess soft swinging is when you do other things, but you don’t go all the way,” Taylor said in the video.

‘We had an agreement, and I did step out of that agreement.

‘And that’s where I messed up.’

The whole premise is that the level of intimacy is agreed upon prior to any sexual act. Taylor and her husband are part of a community that agrees to swap partners but draws the line at penetrative sex.

Taylor said that this has led to her divorce and sex educators say that she went against the agreement of their relationship.

‘Breaking this rule without prior agreement from your partner is a breach of trust,’ says sex expert Isabelle from Bedbible. ‘Crossing your partner’s boundaries in this way and being dishonest by doing it without their consent damages the foundation of trust needed in a relationship.’

Can ‘soft swinging’ have benefits in a relationship?

While people are now debating the act of soft swinging, Isabelle says that the practice could improve the sex lives of couples and is also a good way to introduce non-monogamy into a relationship.

‘When done properly, soft swinging can be a great way for couples to keep sex exciting and build intimacy and connection,’ explains Isabelle.

‘It takes a lot of trust to successfully engage in consensual non-monogamy, which is a great skill to have in a relationship.

‘Soft-swinging can also be a way to see if full swinging or other types of consensual non-monogamy would benefit the relationship.’

On top of that, Isabelle notes that it can also be a way for couples to fulfil sexual desires their partners do not want to participate in, especially if libidos within the relationship differ.

Ness Cooper, a clinical sexologist, therapist and coach, says: ‘Soft swinging can help you avoid the emotional and moral tax society places upon penetrative sex, and help avoid negative emotions such as shame that may arise from penetrative sex due to social expectations placed on it.’

How to bring ‘soft swinging’ into a relationship

The first step to bringing soft swinging into any relationship is to have an honest discussion.

‘You should talk about why you want to do it, what it would bring to your relationship, what boundaries you need to set, and how you would handle potential problems,’ Isabelle tells Metro.co.uk.

Opening up a relationship isn’t something couples should rush into without clear communication and fully understanding the expectations of both parties.

‘You should take time to talk it through and process your thoughts and feelings around it,’ she says.

‘You can explore the topic more by discussing your soft-swinging fantasies or role-playing them at home to see what emotions come up.’

Isabelle also recommends researching online and talking to people involved in swinging/soft-swinging to better understand what it involves and what options exist.

Going to a swingers club or looking at a club’s website together could help couples get comfortable with the idea, says Ness.

‘When venturing into a swingers club, you don’t have to take part in any sexual acts right away, and that’s ok. You can simply go together to see how comfortable you both feel.’

What boundaries should be put in place?

Ultimately any boundaries created will differ depending on each couple’s desires. But there are a few things Isabelle suggests deciding upon before you try soft swinging:

Ness also suggests discussing how you want to react when you meet people you have been intimate with, in the soft swinging community, in day-to-day interactions.

‘If you bump into each other in the shops – do you chat as friends, or do you blank each other and get on with your day?’

Can it lead to any problems?

Soft swinging can be a great tool for sexual experimentation and fulfilment, but there has to be a strong foundation of trust and honesty for it to work.

‘There are different foundational factors that can lead to problems, including your reasons for trying it, how much trust there is, how honest you are with each other, and how well you communicate,’ Isabelle explains.

‘For example, I would not recommend trying soft swinging to fix problems in the relationship or if one partner is doing it to please the other.

‘Other problems can arise if boundaries are crossed, or partners fail to be honest about how they feel about soft swinging.’

Outside perception can also cause problems. ‘It can challenge some people’s internal belief systems that have been influenced by upbringing and or society,’ says Ness.

‘Some couples think that swinging may resolve other relationship issues, but it’s not always the case.’

Aftercare is also an important part of the process, says Isabelle. It should involve checking in with each other about how you felt during the experience and whether you are still on the same page and want to continue.

‘This is also a great way to nurture the connection with your partner after the session,’ she says.