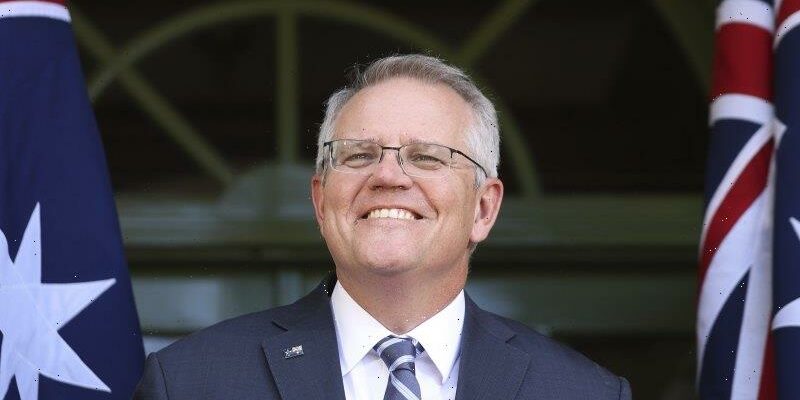 From Monday, vaccinated NSW residents will begin enjoying freedoms they have lived without for months.

Beers, hair cuts, meals out, 10 visitors in the home, indoor pools reopening and schools restarting are just some of the freedoms returning now that 70 per cent of adults are fully vaccinated.

Residents of Melbourne and its surrounding regions in Victoria are not too far behind, with some freedoms expected to return when the state reaches 70 per cent vaccination in the last week of October and bigger steps to come at 80 per cent, expected on or around November 5. 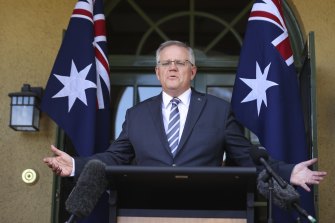 Scott Morrison is urging the states to get people jabbed, so they can open up and live with COVID – and own the economic recovery.Credit:Alex Ellinghausen

Life will start returning to something resembling normal. Even if the timing slips a bit, Australia’s two biggest states are moving on from the pandemic, the states without COVID-19 are grappling with what comes next and a pivot point is approaching for Australia’s political leaders.

Having traded blame and credit over shutting down, saving lives and getting vaccinated, state and federal governments will now battle to control the narrative over reopening and resuming normal life.

While there is no doubt people will relish having their freedom restored after a long 21 months, all the expert analysis suggests that even with vaccination rates climbing, reopening will cause the number of cases to climb. Former NSW premier Gladys Berejiklian predicted they would “go through the roof”.

University of Melbourne epidemiologist Tony Blakely suggests that “Christmas will see a rise in transmission” as families gather after months, or years apart, but adds, “I don’t necessarily think there will be a big surge”.

That’s because the country is on track to hit 80 per cent and, he adds, quite possibly 90 per cent double vaccinated.

Managing the reopening and claiming the credit for it and the vaccination campaign – while also managing a surge in cases, maintaining mask mandates in some settings and trying to drive an economic recovery – will be a hugely difficult balancing act for both Scott Morrison and Labor leader Anthony Albanese.

On Thursday, Morrison – who has endured months of criticism for a slow rollout of the vaccine – held a press conference to mark NSW passing the 70 per cent double vaccination mark, in the latest of his “sunlit uplands” press conferences that strike a strongly optimistic note.

“To all those still in lockdown, you can look at this day and say, we’ll be there soon, and I know you will be. It won’t be long. And as the days get warmer, then I think Australia’s prospects will continue to get brighter.” 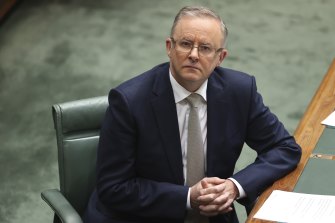 Opposition Leader Anthony Albanese. The ALP will once again take an Australian-made procurement strategy to a federal election through a 10-point plan.Credit:Alex Ellinghausen

Morrison’s framing of the current moment was designed to place him front and centre as the national figure who is leading Australia through to the other side of the pandemic and, in so doing, put the recent difficult months behind him and burnish his credentials ahead of an election that is due no later than May next year.

Political observers close to Morrison insist that, as the PM has said publicly, the prospect of an election late this year is now remote because the government just has too much to do between now and the nation fully reopening.

That includes opening state borders, letting Australians travel overseas again, then letting skilled migrants and students back into the country in a COVID-safe way, as well as landing a climate deal with the Nationals and kick-starting the economy.

The risk of individual states going their own way and remaining walled off, or going back into lockdown when cases spike, is a major concern for the federal government too – which is why the PM hammers, time and again, the fact that the national plan sets out that lockdowns will permanently become a thing of the past.

A politico close to Morrison, who is not authorised to speak publicly, says the election window is slightly ajar “but you’d need a very good reason to go early”.

“We’ve turned a serious corner on vaccines, Labor’s ‘they had two jobs’ line on quarantine and vaccines was a good line for a while, but it always had a use by date. It was tactical, not strategic,” he says.

“If people say they know what will happen in the next three months, they’re bulls—ting you. What does matter is us articulating a sense of stability and certainty.”

It’s that sense of certainty, of continuity, that will form part of the bedrock – along with getting the economy restarted – of Morrison’s re-election pitch.

But Labor believes the government still has significant anchors weighed around its neck in the shape of the climate deal, discord in National Party ranks and state premiers lining up to demand more funding for their health and hospital systems.

As one key player in opposition ranks puts it: “Morrison’s hoping liberation and freedom [from lockdowns] will wipe out his negatives, but I don’t think he can bank on that. There are also ongoing issues like corruption and misbehaviour by ministers; there are four weeks of [federal] Parliament left and he doesn’t do well there.”

Ryan Liddell, a former senior adviser to then opposition leader Bill Shorten and treasurer Wayne Swan, who also worked in NSW politics and is now a consultant, says the speed with which lockdowns are eased and the impact that has on the health system will be critical.

“Because the country hasn’t experienced the pandemic in a uniform way, it makes it much harder for either side to present a unified message – look at the different experiences of Victoria and NSW versus WA, Queensland and SA,” he says.

“The other interesting dynamic is the role of the premiers. There are lots of positives from national cabinet, but it has also reshaped the role of the PM. The premiers have a bigger platform and they’re not as prone to listen to the direction of the PM as they may have been in times past.

“So the challenge for Scott Morrison is to try and carve out credit for the good times when things open up, but the premiers will also try to claim that credit. It’s a pretty precarious balancing act between opening up in those states, the pressure on hospitals and whether people have tolerance for easing restrictions if things really do go south when things open up.” 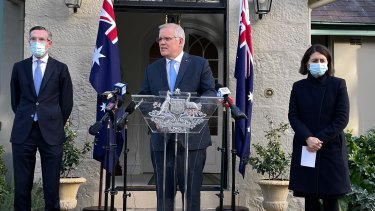 Dominic Perrottet taking over the premiership of NSW from Berejiklian will change the national cabinet dynamic. Just months ago Morrison and the then treasurer were at loggerheads over NSW’s share of federal financial support with strong words exchanged. But when questioned this week on the Nine Network’s Today show about the pair’s combative history, Morrison said, “we have a good, robust relationship … So when we disagree, we disagree and the next day we’re straight back to it… He stands up for NSW. I look after the national interest”.

According to Liddell, Labor has to “tag Morrison with the hard times that people have been through this year. But Morrison has the advantage of incumbency during a pandemic and Albanese has to ask people to reflect on a period the most people will want to forget, that makes them uncomfortable.”

Rachel Obradovic, a former adviser to Julie Bishop who also worked in Victorian politics and is now head of public affairs for the Liberal-aligned CT Group, suggests that as vaccination rates reach world-leading levels and health concerns subside, “voters will turn their attention to the economic recovery, cost of living and jobs”.

“The Coalition will seek to refocus the agenda back on its core equity of strong economic management,” she says, adding that certainty for businesses about reopening and operating during COVID and for domestic and international borders to reopen and remain open is likely “a position the Coalition will hold firm”.

“The challenge for the opposition will be around demonstrating they are better equipped to manage the economy at a time the Coalition will be leading the economic recovery,” Obradovic says.

Work is well advanced on the mid-year economic and fiscal outlook, known as MYEFO and handed down in December, with the government’s Expenditure Review Committee meeting regularly.

The December budget update will provide crucial clues as to whether government will hand down one more budget before a May election, or go earlier in March or April.

Morrison is likely to campaign at least in part with a message that asks voters: “Who do you trust to run the economic recovery?”

As one minister puts it: “Every election is hard, you have to find the path through and that’s all about delivering for communities. We will go to the election with a strong economy, strong national security and with no new taxes.

“We will sandbag seats and we will demonstrate we are delivering for people.”

But given how regularly COVID-19 has thrown curve balls in the 21 months since the pandemic began, who’d bet on that?

Stay across the most crucial developments related to the pandemic with the Coronavirus Update. Sign up to receive the weekly newsletter.