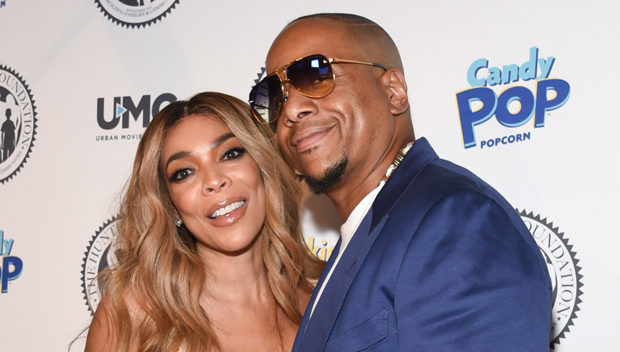 Wendy Williams is laughing while her haters continue to troll her marriage. After rumors that her husband Kevin Hunter cheated, HollywoodLife has learned that Wendy’s marriage is ‘solid’!

Wendy Williams, 54, isn’t fazed by the infidelity rumors surrounding her marriage to producer, Kevin Hunter. In fact, they’ve never been better! “Wendy‘s marriage with Kevin is as solid as ever. She is laughing at some of the infidelity rumors, which have popped up yet again,” a source close to the talk show host tells HollywoodLife.com EXCLUSIVELY.

These so-called “new” cheating claims stem from the same rumors that made headlines a few months ago, which claimed Hunter was living a double life for years. And, just like the last time these rumors swirled, Williams is dealing with the gossip in the same way. — She’s not paying any attention to it! “Wendy is happily married and she has no plans to leave or divorce Kevin,” the insider reveals.

“Wendy doesn’t appreciate people taking shots at her or her marriage,” the source says, who notes that this unfortunately happens regularly, being in the public eye and all. “But, she had gotten used to it although it is not nice, appreciated or valid.” Right now, Williams is focused on her health and her continued happiness with her family.

The infidelity rumors also came after Williams issued a public apology on Instagram about slurring her words on live television during an episode of her daytime talk show. Before her holiday break, Williams appeared to slur her words while introducing rap group, The Lox, for a performance on her show. She later admitted that her unusual form of speech was a result of painkillers she took to treat her fractured shoulder.

Williams also said her battle with Graves’ disease, which affects her thyroid, has been a contributing factor to her “less stellar” performance. “Needless to say, whatever today’s performance was with the legendary The Lox, who said such nice things, I have no regrets and I appreciate everyone’s genuine concern for my wellness and care,” she wrote in her apology message. The talk show host then promised to be better in 2019. “I will get some much needed rest and healing over these next couple of weeks. (Yes I am definitely juicing over the next couple of weeks). Sorry again. I love you all. Happy Holidays!”