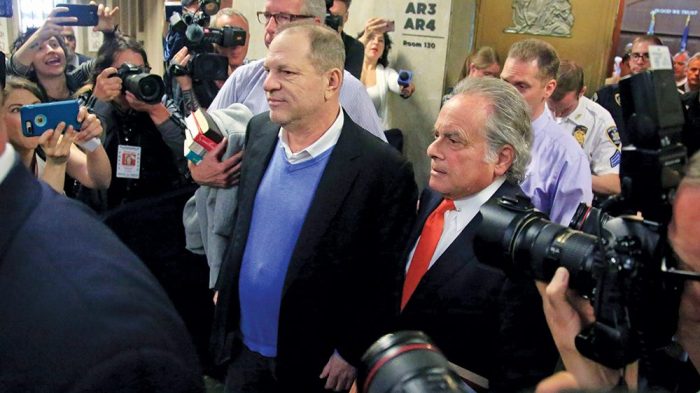 Harvey Weinstein’s attorney is preparing a preemptive strike, looking to undermine the accounts of additional accusers before they are brought into his sexual assault case.

The Manhattan District Attorney’s Office has filed five charges against Weinstein involving two women. But detectives have also interviewed at least 14 other women who may be called to buttress the charges. Many of those women have filed civil suits against Weinstein or have identified themselves in the press.

In the Bill Cosby sexual assault trial in Pennsylvania earlier this year, prosecutors were allowed to call five women who told of their own allegations against the comedian. Though those allegations could not be prosecuted due to the statute of limitations, they were used to show a pattern of behavior that helped jurors reach a guilty verdict.

In New York, such “prior bad acts” witnesses are called Molineux witnesses. Prosecutors would have to ask Judge James Burke to allow such witnesses to testify. They have yet to do so, and have refused a defense request for a list of potential Molineux witnesses, saying the request is premature.

Weinstein’s attorney, Ben Brafman, is preparing to file a motion by Wednesday that will attack the credibility of many of those witnesses. In the Weinstein Co. bankruptcy case, Weinstein has been allowed to access several thousand of his work emails. In a court conference call on Monday, Brafman said they included “exculpatory” emails involving 25 accusers.

“What’s stunning, quite frankly, is that without exception, virtually every one of these women have maintained intimate, personal, very friendly correspondence with Mr. Weinstein for years in some cases after the alleged sexual assault,” Brafman said.

Brafman was asking Judge Mary Walrath for permission to quote those emails, using the accusers’ names, in his motion to be filed Wednesday. Walrath is overseeing the bankruptcy case. She had previously allowed Weinstein to quote about 40 emails from one of the accusers in the criminal case. Brafman used those emails — many of which expressed affection for Weinstein — in an unsuccessful bid to have those charges dismissed.

Attorneys for the unsecured creditors raised objections to Brafman’s latest request, saying the women are not yet part of the criminal case, had not been notified that their emails would be published, and deserved an opportunity to respond.

“The prosecutor has not named these women,” said attorney Elizabeth Fegan, who represents 10 plaintiffs. “Mr. Weinstein is trying to lay out these emails that these women do not have access to and have not seen.”

Brafman argued that the women have already put themselves in the public arena by making accusations against Weinstein, and argued it would hamper the defense if he were not allowed to rebut the allegations. Brafman is again seeking to have the case thrown out. He intends to argue that prosecutors and police have bowed to public pressure to indict Weinstein, and did not thoroughly investigate the emails before bringing the case.

Walrath ruled that Brafman could quote from the emails in the motion, providing that the accusers’ names and identifying information are removed. Scott Cousins, Weinstein’s attorney in the bankruptcy case, also sought and obtained permission to use the emails in defending the civil suits, provided that the plaintiffs are given advance warning.

A hearing in the criminal case is set for Dec. 20.