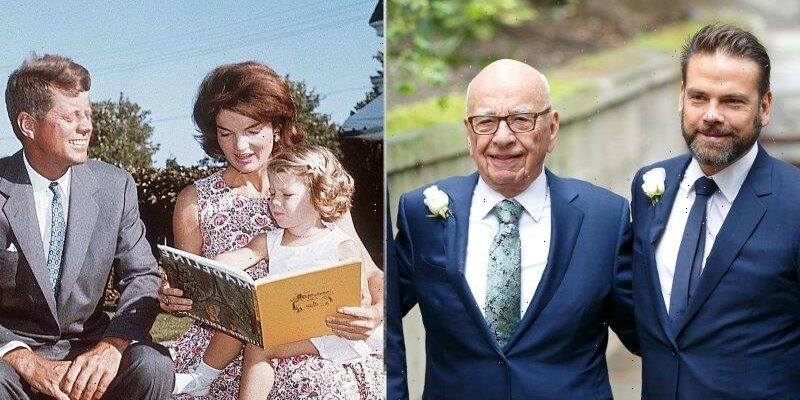 Amid the fanfare that greeted Caroline Kennedy when she moved to Australia nearly three weeks ago, none touched on what is arguably one of her greatest triumphs.

Namely, that the daughter of John F Kennedy, the 35th president of the United States, has seemingly dodged the dysfunction and agonies that have savaged countless dynasties. 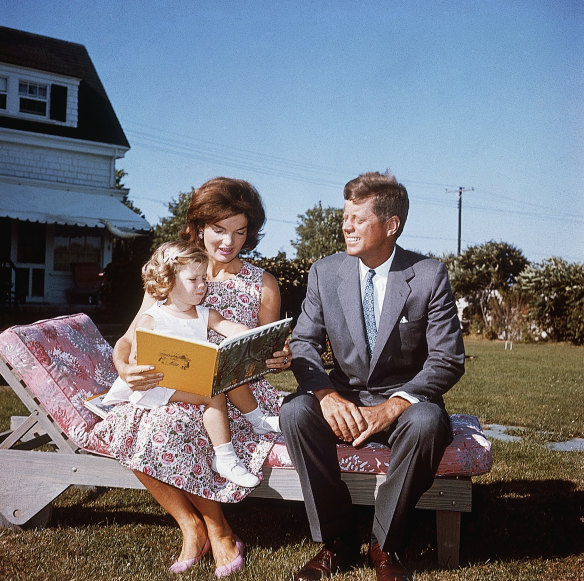 “We are all afraid of being alone,” Caroline Kennedy, pictured with parents Jacqueline Kennedy and John F Kennedy, wrote in a poetry collection when she was 59.Credit:Getty

“It’s just an inherently problematic situation which carries the risk of perverse outcomes,” says author Michael Gilding of dynasties. They contain an explosive cocktail of money and expectations that children of the rich will carry on the family business, while the children are born without needing to earn a living. Gilding gleaned his insights from interviewing 50 Australians drawn from BRW Rich Lists for his book, The Secrets of the Super Rich.

In my family in particular, I think, there was a sense we have to work twice as hard.

Kennedy might have avoided the public stoushes over succession like the Rineharts and the Murdochs, and a squandered family fortune like the Vanderbilts and the Pulitzers. But her arrival is a prompt to examine what inheritance and trauma experts say is a neglected topic: our reverence for dynasties and the extreme damage they inflict not only on their own families, but on the rest of us.

“I think it’s entertainment, I really do,” says Kennedy family expert Neal Thompson of our obsession with dynasties. “It’s that attraction to the ups and downs of these people that we think of as exceptional, born into wealth and power, but still, they’re all f–ked up like we are. They get divorced, they’re drunks, they’re liars, they’re cheaters.

Thompson, whose book The First Kennedys, about John F Kennedy’s Irish ancestors, came out in February, says dynasties are an easy conduit for the rest of us 99 per cent-ers to feel better about ourselves.

“On the one hand, we look up to them because they’re so wealthy and stylish and powerful, and represent all these things that we aspire to,” says Thompson. “On the other hand, they fail in really like majestic ways. We see them fail on the big screen, and I think that makes us feel a little bit better about ourselves. [We think] ‘I might not be a royal [or tycoon], but at least I’m not messed up [like they are].’”

But there’s a catch. 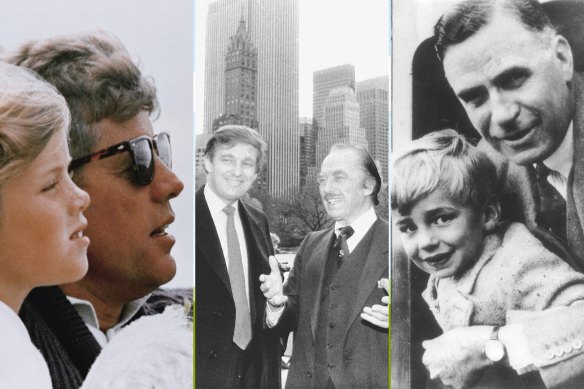 “That privilege and degree of power and social and financial capital that these families have means that they have an enormous advantage to be what I call high-level and high-impact transmitters of trauma,” says Meera Atkinson, an adjunct lecturer at the University of Notre Dame Australia and a trauma researcher.

I’ll always remember one of them said, ‘You can’t control how many idiots you have as children’.

By this, Atkinson means that if powerful people become addicted to power and making money – possibly as a result of trauma they’ve inherited from their ancestors – they can end up acting out in impulsive ways that, because of their influence, threaten the wellbeing of those of us lower down in the pecking order.

“My speculation is there is some order of obsessive-compulsive acting out here,” Atkinson says of people like Donald Trump and Rupert Murdoch, who have denied or minimised the effect of climate change. “What else can really explain the sort of headlong rush ahead, into continued climate crisis [denial]? What could be powerful enough to create blinkers around something as vital as the environment we live in, that sustains us, [and the need] to make sure it’s habitable?”

As a result, governments and people in positions of leadership need to re-think who they consider successful, and stop privileging the wealthy just because they have power, she says. “[Because] when we don’t tax families like the Rineharts and the Murdochs, then what are we doing here? We’re creating monsters that then do the damage,” she says. “The most privileged, the Kennedys, the Packers, the Rineharts, if [where they live] goes under [water]” – due to climate change – “they can colonise another place. They’ve got that kind of money. But other people are not going to have those options.”

But what is intergenerational trauma, exactly? And how does it relate to dynasties?

“Trauma’s absolutely passed down [through generations],” says Dr Laura McLauchlan, an honorary environment and society lecturer at the University of NSW who has studied intergenerational trauma. This can be on the genetic level, with studies that have shown that one generation’s personal experience – say a war, or other traumatic experience – can be passed down to the next, through gene markings that are switched on or off, leaving offspring with dispositions aimed at helping them survive. For instance, one study shows that grandmothers in Holland who endured a famine passed down a predisposition to put on weight and store carbs to their maternal granddaughters. 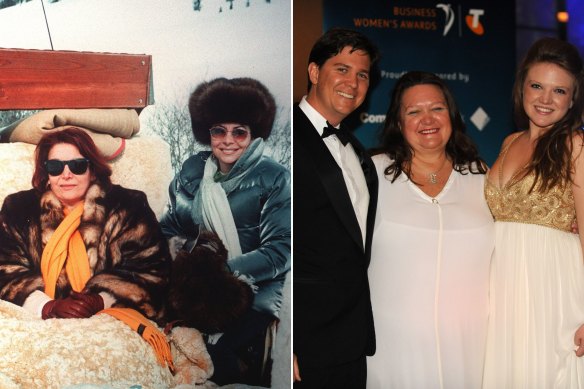 Dynasty trouble: Patrizia Reggiani Martinelli and her psychic Giuseppina Auriemma, left, were charged with the 1995 murder of Martinelli’s ex-husband, Gucci family scion Maurizio Gucci; coal magnate Gina Rinehart, right, pictured with children John and Ginia, has been battling her children over a $5 billion trust for 11 years.Credit:Getty

As for the members of powerful dynasties, many have posited that they – who have frequently been berated and pressured into becoming ruthless money-makers, whether they like it or not – inherit trauma, either on the genetic level or through neglectful parenting.

Mary Trump, niece of former American president Donald Trump and a clinical psychologist, has written that her “malignantly dysfunctional” family, led by her late grandfather Fred Trump, destroyed his sons and, by extension, has helped break down American democracy.

Fred Trump, who she says was a high-functioning sociopath, ridiculed his son, Fred Jr, for his desire to become a pilot, rather than joining the family’s real estate business. He would be “nothing more than a chauffeur in the sky”, said Fred. (Fred Jr descended into alcoholism and died in 1981 at 42.) And he taught his son Donald to be a “killer” and a “king”, and “destroyed” him by crippling his “ability to develop and experience the entire spectrum of human emotion”, as Mary Trump wrote in her 2020 book, Too Much and Never Enough: How My Family Created The World’s Most Dangerous Man.

Even Donald Trump has said he “regrets having put pressure on him [Fred Jr]” to join the family business, as their father did. “I think the mistake that we made was we assumed that everybody would like it. There was sort of a double pressure put on him.”

It’s a scenario that has plagued some of Australia’s ultra-rich, too, says Michael Gilding.

“I interviewed people who grew up in really quite dire, poor situations, but their appetite for risk was relentless and just continued throughout their whole lifetime,” says Gilding, author of Secrets of The Super Rich. In many cases, the children of barons did not share their parent’s passion, which led to their alienation from them. “There are lots of you know, situations, where the people I interviewed often described quite traumatic situations of alienation between parents and children in that regard.

“When all is said and done, building a large fortune requires concentration, attention and focus,” says Gilding. “And it doesn’t necessarily leave a lot of time for a generative relationship or a kind of nurturing relationship. And so that intimacy can be missing…. I’ll always remember one of them said, ‘You can’t control how many idiots you have as children.’” (This wasn’t the case for everyone he interviewed, and many magnates had stable family businesses and healthy family relationships, he says.)

A Harvard Law School graduate who has held numerous political positions (most recently, the American ambassador to Japan), Caroline Kennedy has three children. One is a filmmaker, another a New York Times environmental journalist and the third a Harvard Business School graduate. Her fortune is intact.

The difference between her and the children of other dynasties, says Neal Thompson, probably comes down to parenting.

Caroline’s father John F Kennedy might have grown up, like many dynasty members, never needing to earn a cent. His power-obsessed father Joe Kennedy, was a millionaire even during the Depression. But JFK was raised largely by his mother, Rose, who instilled in her children the necessity that they be of service, says Thompson. “It was clear to them that because they came from privilege, there was an expectation that they do something with it. That they do something useful, either in public service or politics. She was the one who reminded them what it was like for their grandmother to face these [American] newspaper ads that said, ‘No Irish need apply’. [Who told them] ‘Hey, you come from poor immigrants [from Ireland] who came to a country that didn’t want them.’ Don’t forget that.’”