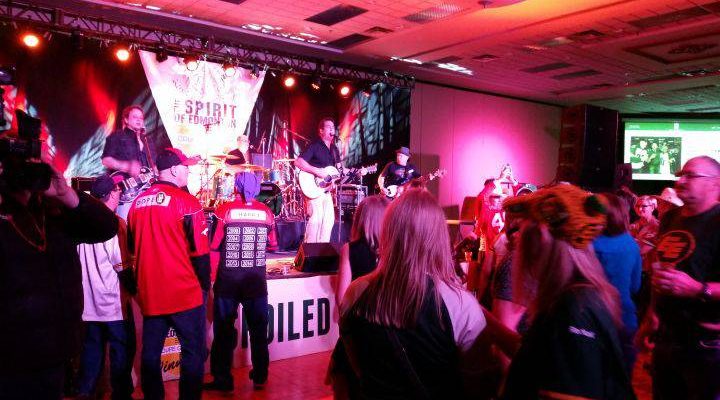 It’s sure to be busy on every corner of Jasper Avenue during the 106th Grey Cup Festival, but there’s one destination that’s known to festival goers near and far.

The Spirit of Edmonton is an entirely volunteer-run labour of love. Chairman Gerry Haracsi said anyone is welcome, no matter the team colours.

“The neat thing about it is, although we represent the Edmonton Eskimos, we aren’t really affiliated with them. We are just 17 volunteers that represent the Eskimos, the City of Edmonton and the CFL. We fly every team’s colours.”

LISTEN BELOW: Spirit of Edmonton ready to host festival goers

If you’re new to the Spirit of Edmonton, which Haracsi refers to as “party headquarters,” there are some rules.

For instance, keep an ear out for the word “sociable.”

“You raise your hand and you toast everybody in the room. It’s something to see. 1,500 people all at once yelling ‘sociable.’”

He said the tradition started with the original Klondike Kate, who recently passed away.

“This year, we will be making sure we do a little memorial for her. We’re looking forward to it.”

The team will also host its 45th annual Spirit of Edmonton Grey Cup Breakfast. The popularity of the event is so extreme, the team added an additional breakfast for festival goers.

“We sold out our first breakfast. We have 2,100 people coming on Saturday morning. On Friday, it’s also sold out. We have 1,970 seats filled,” Haracsi said.

“It’s nonstop entertainment from 8 a.m. right through ’til noon. We call it a breakfast because we have to call it something at 8 a.m. in the morning.”

Sluice Juice, an infamous alcoholic concoction that looks decidedly like orange juice, will be served all morning.

“We just built another 500 litre tank. We have two of those and we go through that three or four times,” Haracsi said. “It’ll get you up and dancing.”

According to him, there isn’t a home team advantage when it comes to party planning. Haracsi said putting everything together at home in Edmonton is actually more difficult.

“When we went to Ottawa, we had four days to get a plan when we visited in August. Now, I’m thinking ‘There’s so many sleepless nights left, what do I have to do?’”

The action begins Thursday at 2 p.m. and runs until the early morning on Sunday.

The 18+ hospitality suite can be found inside the Westin Edmonton. There is a $10 cover charge for entry.