Khloé Kardashian’s family members were in the delivery room with her and Tristan Thompson just days after news of his cheating scandal erupted — and the energy in the room was palpable.

In a new clip from the Sunday, November 18, episode of Keeping Up With the Kardashians, Kim Kardashian, Kris Jenner, Kourtney Kardashian and Khloe’s best friend Malika Haqq arrive to the hospital where the Good American founder is in a hospital bed waiting to welcome her daughter.

In one moment, Kim, 38, walks up behind the Cleveland Cavaliers player, 27, and repeatedly makes a cutting motion against her neck while laughing. “The vibe in the room is calm. I thought there would be way more tension. As much as I want to go off, I just don’t think it’s the time so I’m going to keep it cute,” the Selfish author explains during a confessional. “I don’t have to have a lot of interaction, I just need to be there for her.” 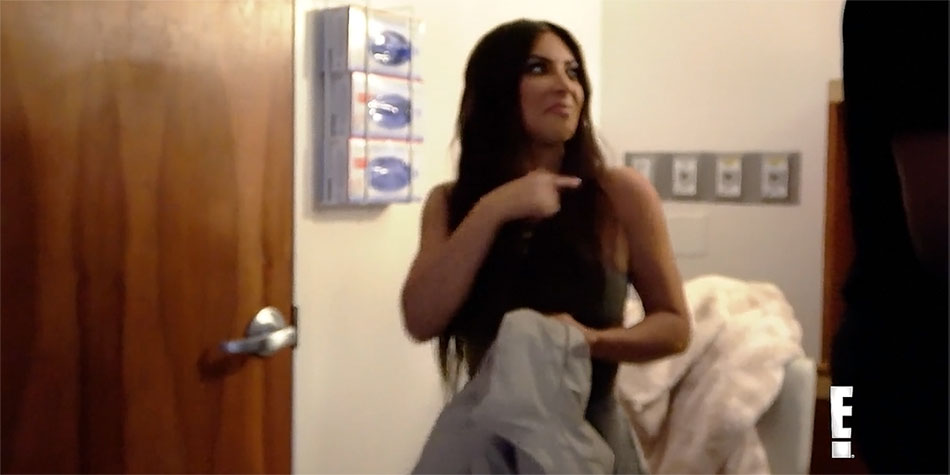 The mood in the room seems to eventually change for the better. Despite the drama, Khloe, 34, and Tristan are seen holding hands at one point. Later, Kris breaks out into a little dance in anticipation of her granddaughter arriving and Kylie Jenner — who gave birth to daughter Stormi two months before — FaceTimes so she can witness the birth.

Khloé’s excitement — she is seen happily caressing her baby bump in the hospital bed — is a far cry from the Sunday, November 4 episode of the hit E! series. After Thompson was accused of cheating with multiple women days ahead of her going into labor, Khloé told Kim she wants to find out if she can travel back to Los Angeles to deliver their child. “I can’t be calm,” she told her older sister. “Not right now.”

The Revenge Body host later explained why she let the NBA player in the delivery despite the betrayal. “I wanted to have a beautiful birthing experience for myself and for the memories of what I choose to share with True when she’s older,” Khloe tweeted following the airing of the November 4 episode. “I want her to have videos and pictures of her daddy there, holding her etc. I want her to know she is LOVE and my happiness!”

“Babies feel energy! I know this!” she continued. “I chose to put my feelings aside for the birth and to try and have as much positive energy that I could.”

For his part, that time of his life isn’t one that Thompson wants to relive. A source told Us Weekly that he gave Khloé “a firm no” when she asked if he wanted to watch the episode together.

Keeping Up With the Kardashians airs on E! Sundays at 9 p.m. ET.