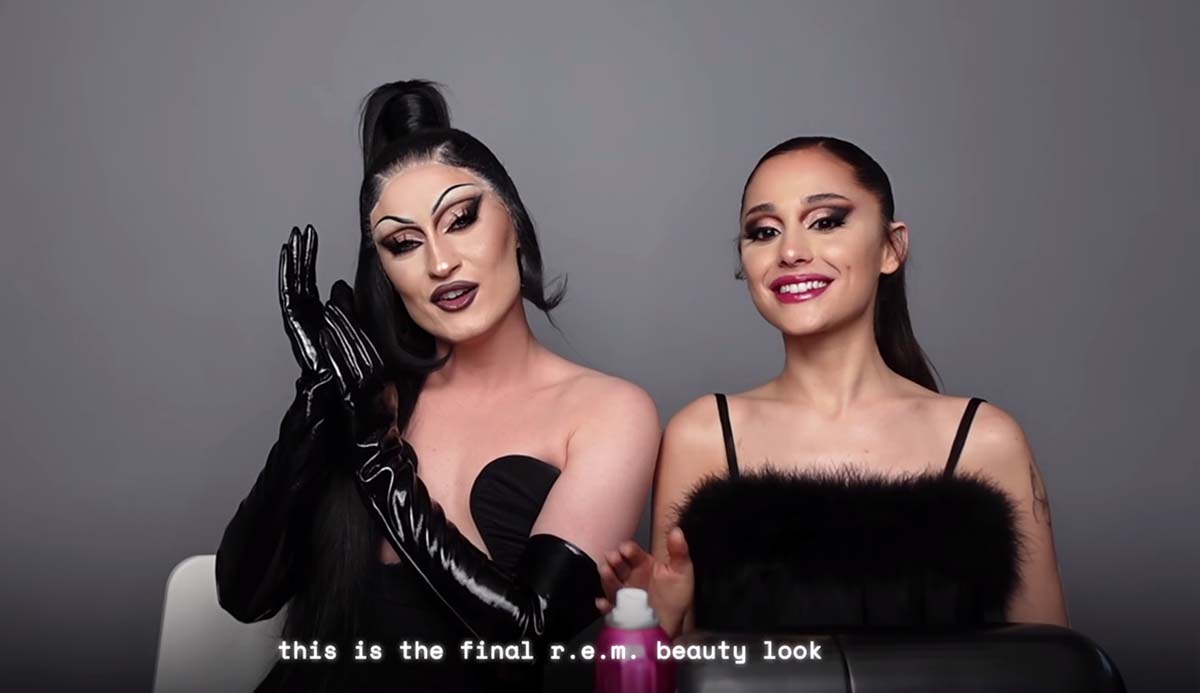 While the duo served up a fair share of laughs in the YouTube video, which was released on Tuesday, March 1, they also sprinkled in a handful of tips, tricks and beauty must-haves from r.e.m. beauty.

The whole thing kicks off with the 28-year-old singer casually revealing that she has a whole line of complexion products in the works. “We both put on a light base. I used a bunch of products that I can’t show yet, but I want them to know that there’s much to look forward to,” the “7 Rings” singer said, showing off her flawless and matte foundation for the camera.

After exchanging a few more giggles, the reality star decided that she wanted give the Grammy winner a “little draggy drag” makeover. To start, she reached for the Scorch Palette, which Grande says is her “everyday one.”

While Gottmik was hard at work creating a fierce cut crease, the duo got talking about how long r.e.m. beauty, which launched last year, has been in the works. “I started working on this when I was still on the Sweetener Tour, it’s been like two and a half years,” the “Thank U, Next” singer revealed. She went on to explain the timing was actually pretty beneficial, as she was able to test out her formulas during performances.

The two also took the opportunity to dish on their favorite products in the r.e.m. beauty line. Because even though Grande obviously loves her entire collection, her glosses reign supreme. “They’re yummy and plumping and I love them,” she said. “I love every shade.”

The RuPaul’s Drag Race star on the other hand has been won over by the “little liquid shadow moments,” which are available in matte and lustrous finishes.

Even though beauty guru has their go-to products, the entire line is up to par. Grande launched her brand in November 2021 with chapter 1, Ultraviolet, which had a focus on the eyes. That in mind, she plans to expand her brand in the future for a total of four chapters.

10 Celebrity Lipstick Brands That Are Actually Worth the Hype

Grande first opened up about her brand just two months ahead of the launch via an interview with Allure. She said that “covering the secret for the past two years and having testers and samplers in my purse and people asking me, ‘Oh, I love your highlight, what are you wearing?’ And me being like, I don’t know, sweating,” was “so hard.”