“Do we have any bone-eating worms?”

Scientists were delighted on Wednesday after they discovered the remnants of a dead whale miles beneath the surface of the ocean, teeming with hungry octopuses, fish, crabs and worms.

The discovery was made by the Nautilus, a deep-sea research vessel that was finishing up its last dive of the season for a joint expedition between the nonprofit Ocean Exploration Trust and the National Oceanic and Atmospheric Administration. Viewers on Wednesday could hear researchers burst out in surprise during a live feed of the dive as the vessel came upon the partially eaten skeleton.

“Dinner is served,” one researcher said, before another chimed in: “Oh, this is so cool.”

The decomposing carcass was between 13 and 16 feet long and came from a baleen whale, although researchers are still determining what species.

“While evidence of whale falls have been observed to remain on the seafloor for several years, this appears to be a relatively recent fall with baleen, blubber, and some internal organs remaining,” the team wrote on Wednesday. “The site also exhibits an interesting mid-stage of ecological succession, as both large scavengers like eel pouts are still stripping the skeleton of blubber, and bone-eating Osedax worms are starting to consume lipids (fats) from the bones.”

The feeding frenzy comes during what’s known as a “whale fall.” When a whale dies, according to NOAA, its carcass sinks to the sea floor, where the skeleton serves as a long-lasting buffet that can “support rich communities for years to decades.”

“Different stages in the decomposition of a whale carcass support a succession of marine biological communities,” the agency wrote on its website. “Scavengers consume the soft tissue in a matter of months. Organic fragments, or detritus, enrich the sediments nearby for over a year.”

The whale fall was discovered about 2 miles deep near the Davidson Seamount, an “inactive volcanic undersea mountain habitat” off the California coastline, according to the Nautilus expedition team. The underwater mountain lies within the Monterey Bay National Marine Sanctuary, and both NOAA and the Ocean Exploration Trust were exploring what they called an “oasis of the deep.”

“One of the largest known seamounts in U.S. waters, the [Davidson Seamount] has been called ’an oasis in the deep’ in an otherwise flat seafloor, hosting large coral forests, vast sponge fields, crabs, deep-sea fishes, shrimp, basket stars, and high numbers of rare and unidentified benthic species,” the expedition team wrote on its website.

The Nautilus has traveled throughout the Pacific Ocean in 2019, the fifth year of the Ocean Exploration Trust’s effort to promote ocean research. 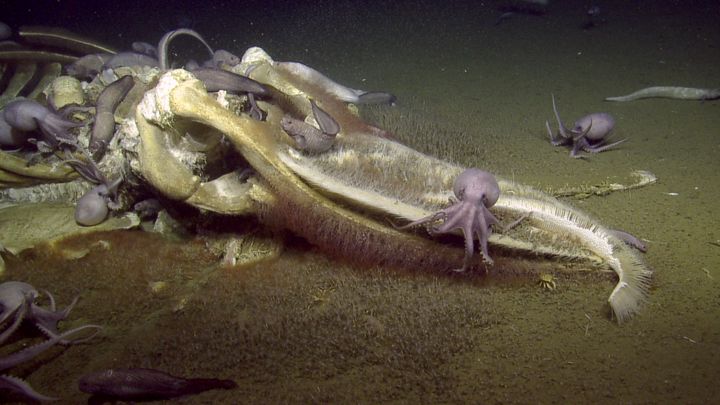