Hollywood studio Warner Bros has stunned the entertainment world by announcing it will put every movie it will release next year – 17 titles that include Dune, Suicide Squad and Matrix 4 – on the streaming service HBO Max at the same time as they open in cinemas in the US.

The move, widely seen as intended to boost the studio's flagging streaming service, follows its earlier decision to give the superhero blockbuster Wonder Woman 1984 a simultaneous streaming release this month given the number of US cinemas closed because of the pandemic. 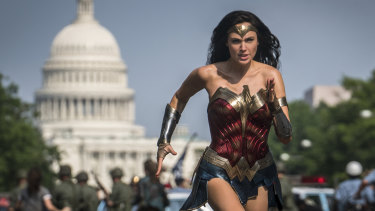 Wonder Woman 1984, starring Gal Gadot, will release in cinemas in Australia and simultaneously on streaming platform HBO Max and in cinemas in the US. Credit:Clay Enos/Warner Brothers

But in Australia, which does not have HBO Max, the Wonder Woman sequel will still get an exclusive cinema run from Boxing Day.

The Warner Bros releases include new movies in the Space Jam, Godzilla and Conjuring franchises, an adaptation of the Mortal Kombat video game, the Will Smith tennis drama King Richard, the Sopranos prequel The Many Saints of Newark and the Lin-Manuel Miranda musical In the Heights.

Announcing the move, the studio sought to emphasise the impact of coronavirus over the needs of HBO Max.

"No one wants films back on the big screen more than we do," said Ann Sarnoff, chair and chief executive of WarnerMedia Studios and Networks. "We know new content is the lifeblood of theatrical exhibition but we have to balance this with the reality that most theatres in the US will likely operate at reduced capacity throughout 2021."

There was an instant backlash by US cinema owners.

"I think it's ridiculous and short-sighted," said Chris Johnson, chief executive of Classic Cinemas, who called it "kicking theatre owners when they're down".

But Australian cinema operators were more measured, largely seeing it as an emergency measure rather than a groundbreaking step towards simultaneous cinema and streaming releases in this country.

The chief executive of the Hoyts group, Damian Keogh, thought the Warner Bros move was a "pandemic model" rather than a troubling sign for cinemas. 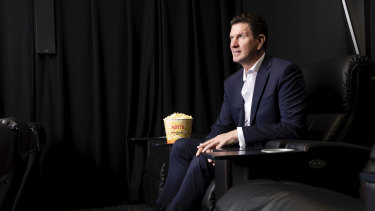 "I don't believe it will be a long-term business model," he said. "Global box office was a record $60 billion in 2019. It remains the best way to monetise content for studios."

The chief executive of Palace Cinemas, Benjamin Zeccola, also considered it "a temporary measure due to extreme circumstances".

Once cinemas were able to open again without restrictions in New York and California, he believed studios would return to a window between the cinema and streaming release to maximise returns on their movies.

The general manager of Sydney's Hayden Orpheum, Alex Temesvari, praised Warner Bros for "​finally showing the willingness of a major studio to think outside of the box" during challenging times.

"Considering how ineffectively the US has handled the COVID-19 pandemic, it makes absolute sense for major studio films to release internationally in a relatively normal roll out, with only the US having a compromised theatrical release," he said.

As well as postponing movies until next year, studios have put new releases on digital platforms as one-offs during the pandemic, including Mulan and Pixar's Soul debuting on Disney +.

But Warner Bros is going much further in the US, sweeping up a wide range of movies that will all be available on HBO Max for their first month of release, in addition to any cinemas that wish to play them.

The announcement one-ups deals that rival Hollywood studio Universal Pictures made with leading theatrical chains AMC and Cinemark, which allow the biggest movies to at least play exclusively in cinemas for three weekends before moving to streaming.

The move was startling in part because Warner Bros has long been very cinema-friendly, releasing Tenet in US cinemas while other studios sat out the American summer. Even if it's only for next year, some cinema owners say many won't be able to pay the rent without a Dune or Matrix 4 on their screens.

But most studios are eager to preserve the cinema business – US ticket sales generated $US11.4 billion ($15.3 billion) last year – even as they ease into a digital world that Wall Street and many executives believe is its future.

While social media was awash with talk of other studios potentially following suit – online, fans called for Disney to put Black Widow on its streaming service – experts say a shift of this scale was unlikely. Other companies do not need digital subscribers the way that WarnerMedia and AT&T need HBO Max subscribers. And there are questions about whether the plan is even economically sustainable for event movies that cost at least $US200 million to produce. While most streaming services make a lot more lower-budget titles in a volume game, studios need the billion dollars a theatrical film will earn around the world.