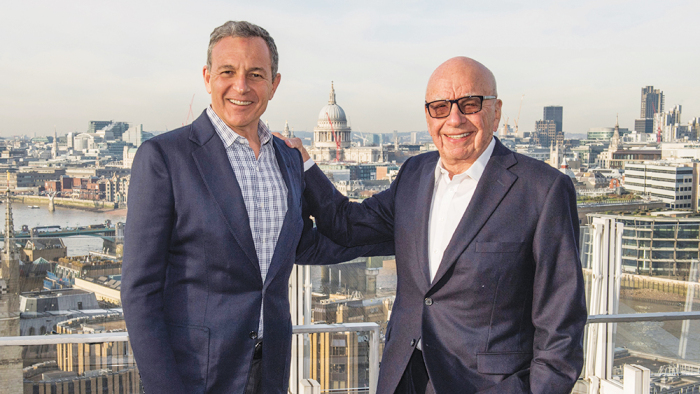 Wall Street is rooting for Disney as the media giant reaches the finish line this week in its 15-month quest to acquire most of Rupert Murdoch’s film and TV empire. Fox shareholders, on the other hand, are being a little more cautious.

Disney is poised to close the $71.3 billion deal that took many twists and turns last year shortly after 9 p.m. PT on Tuesday. (See timeline below). The birth of the Murdochs’ successor Fox Corporation — home of Fox Broadcasting, Fox News and Fox Sports — will also be official on Tuesday.

The completion of the historic transaction has top Wall Street analysts weighing in with a vote of confidence in Disney’s big gambit and the leadership of chairman-CEO Bob Iger. Disney shares have mostly been flat or down since the acquisition was unveiled Dec. 14, 2017, but its been trending up since mid-February in anticipation of the deal closing. The stock was up 48 cents at the close of trading Friday to $114.96. It’s up 7% for the year to date.

On Friday, Disney revealed the selections made by 21st Century Fox shareholders on whether to receive $38 in stock or cash in exchange for their Fox shares in the transaction. Slightly more than half — 51.57% — chose cash, while 36.65% chose Disney stock. The remaining 11.79% of holdings of roughly 1.8 billion shares outstanding did not make a selection by Thursday’s 5 p.m. ET deadline. Disney had projected that the compensation breakdown in cash and stock would be about 50-50.

JPMorgan analyst Alexia Quadrani offered a bullish take on Disney’s chances despite the enormous challenges ahead with a report this month projecting that its soon-to-launch Disney+ platform could over time draw as many as 160 million subscribers worldwide, including 45 million in the U.S.

“While there is little question there are more DTC services today than ultimately should survive, we have no doubt that Disney+ remains on the short list of products that should prevail longer-term,” Quadrani wrote. “Our confidence in the resilient success of Disney+ comes from the company’s unmatched brand recognition, extensive premium content and unparalleled ecosystem to market the service.”

Iger is heading into what will likely be the biggest challenge of his Disney tenure. He’s re-engineering the studio’s film and TV operations toward direct-to-consumer platforms, and at the same time the company will be juggling a massive integration process of far-flung Fox assets including the 20th Century Fox studio, FX Networks, National Geographic Partners and a vast collection of international channels. The industry is bracing for the impact of thousands of layoffs, estimated as high as 4,000, as the companies are consolidated.

Industry analysts recognize the climb ahead for Disney as it will have to soldier through a period of big losses of foregone licensing revenue for its movies and TV shows. The hit will be magnified by the need to invest even more in content overall to support the direct-to-consumer streaming platforms, which include Hulu, soon to be majority-owned by Disney, and ESPN+. Disney is banking on Fox’s content engines and deep vault of titles and IP — not to mention the management stars that come with the deal — to add heft to the content pipeline that will feed the new streaming services.

Michael Nathanson, longtime Disney watcher and analyst for MoffettNathanson, underscored the uniqueness of Disney’s opportunity to recalibrate its operations for a new era of media. Disney is fortified by the IP-rich acquisition strategy on Iger’s watch (the murderer’s row of Marvel, Pixar and Lucasfilm) and also the weight of its own considerable brand.

“Disney is a brand, not a name of a corporate holding company, and has clear, well defined and widely embraced brand strengths plus an undeniable track record of producing excellent content,” Nathanson wrote in a recent report. “The company has historically taken big swings… and won over the past few decades. From building theme parks around the world to acquiring Pixar et al., Disney has continually invested for long-term growth and sustainability. While Disney+ doesn’t have a paying subscriber yet, the company will own an unrivaled film and TV library, multiple mass marketing vehicles to activate consumer interest and a technology platform in BAMTech that seems to be ready to go.”

As of today, Iger and Co. are in the final two-day sprint to complete the Fox transaction. Here’s a timeline of key events in the deal that promises to change the face of Hollywood.

Nov. 6, 2017: CNBC’s David Faber delivers the bombshell exclusive that Bob Iger and Rupert Murdoch had been discussing a possible transaction on and off for several months.

After Faber’s report, Comcast jumps into the fray in an effort to counter Disney’s bid with an all-cash offer. Fox juggles talks with Disney and Comcast for a few weeks.

Dec. 11: Disney closes in as it becomes clear Fox’s board prefers to sell to Iger. Comcast pulls itself out of the running with a statement asserting it never got the “level of engagement” necessary to reach a deal.

After the new year, rumors increased that Comcast was back to considering a new bid for 21st Century Fox. The decision would hinge on a federal judge’s ruling in the antitrust trial against the AT&T-Time Warner merger. At the same time, Comcast also began looking at mounting a counteroffer against 21st Century Fox for the satcaster Sky. Fox had been trying to buy the 61% of Sky that it did not own.

As the corporate battle unfolds, industry insiders in Hollywood become obsessed with sorting out the post-merger org chart. Speculation at Fox about who will go to Disney and who will not is rampant.

April 25: Comcast formally unveils $31 billion bid for Sky. Chatter on the Street increases about Comcast’s preliminary efforts to raise financing for another all-cash bid for Fox.

May 23: Comcast confirms plan to field counteroffer for 21st Century Fox. Fox’s board re-enters talks with Comcast and with Disney.

June 27: The Justice Department approves the Disney-Fox deal under the condition that Disney sell Fox’s 22 regional sports networks within 90 days of the deal closing.

July 19: Comcast formally bows out of the hunt for Fox.

Nov. 6: The European Union approves the Disney-Fox transaction on the condition Disney sell its 50% interest in select European channels owned through the A+E Networks joint venture with Hearst.

Feb. 27: Brazil approves the transaction on the condition that Disney sell off its interest in Fox Sports-branded channels in the market.

March 11: The last regulatory approval comes through from Mexico, clearing the way for Disney to trigger the shareholder election period.

March 15: Disney announces that nearly 52% of Fox shareholders elected to take $38 a share in cash while nearly 37% elected to receive Disney shares.