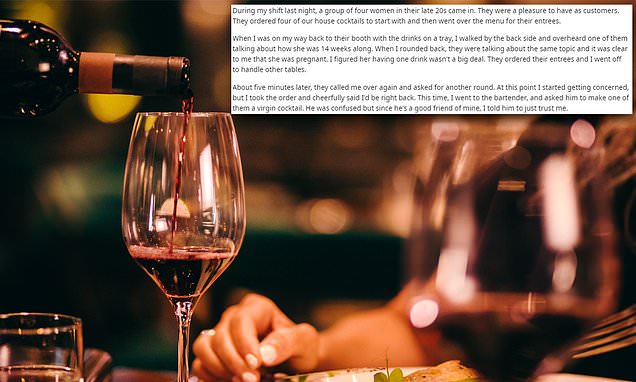 Waiter admits he secretly served virgin drinks to a pregnant lady who ordered ALCOHOLIC cocktails and sparks a furious debate on Reddit – so do YOU think he did the right thing?

A waiter has sparked debate online after revealing that they secretly gave a pregnant woman virgin cocktails after she ordered alcoholic drinks.

The server took to Reddit on Wednesday, July 24, to share a now viral post, in which they explained that during a serving shift, a group of women in their late 20s came in for dinner and drinks, and that they overheard one woman saying that she was pregnant.

The waiter then decided to have the bartender make alcohol-free cocktails for the pregnant woman, and served them to her without telling her they were virgin drinks. 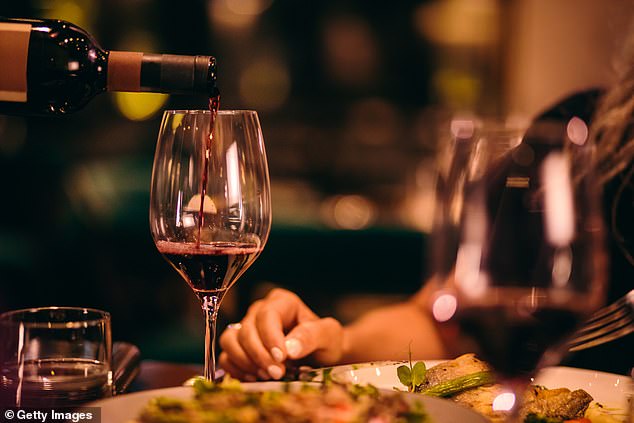 Controversial: A restaurant server has sparked debate online after revealing that they secretly gave a pregnant woman virgin cocktails after she ordered alcoholic drinks (stock image)

Concerned: The waiter said they were serving a group of women in their late 20s when they overheard one of the women saying she ‘was 14 weeks along’

Confused: Unsure what to do, the waiter decided to have the bartender make virgin cocktails for the pregnant woman, who didn’t seem to notice any difference in the drinks

Backlash: When the manager found out, the waiter was removed from the work schedule, and was told that they could get the restaurant into a lot of trouble for ‘discrimination’

The waiter’s post read: ‘During my shift last night, a group of four women in their late 20s came in. They were a pleasure to have as customers. They ordered four of our house cocktails to start with and then went over the menu for their entrees.

‘When I was on my way back to their booth with the drinks on a tray, I walked by the back side and overheard one of them talking about how she was 14 weeks along.

‘When I rounded back, they were talking about the same topic and it was clear to me that she was pregnant. I figured her having one drink wasn’t a big deal. They ordered their entrees and I went off to handle other tables,’ the waiter said.

The waiter explained that a few minutes later, the ladies at the table asked for another round of drinks, and the waiter became ‘concerned’.

This time, the waiter asked the bartender to make one of the drinks a virgin cocktail, and he served this to the pregnant woman.

The waiter continued: ‘A few cocktails later (hers strictly virgin) they started getting rowdy, and Mrs. Pregnant Woman was also getting into it. I figured that since she didn’t notice, things were OK.

‘The problem came when I took them their check, and they asked to split the bill at the register. When Mrs. Pregnant Woman got to the counter, I saw her cocktails were marked with (virgin). My bartender had edited each in the system for inventory.

‘It was too late for me to edit them back, so I just had her pay, hoping that she wouldn’t look at the receipt,’ the waiter said.

They added that the group left a ‘generous tip’ and then made their way to the parking lot, where they were waiting for an Uber.

‘Several minutes later Mrs. Pregnant Woman came back and asked what (virgin) on the receipt meant,’ the waiter said. ‘I fessed up that it meant non-alcoholic.

‘She blank stared me for a few seconds and then asked if she had ordered a non-alcoholic cocktail.

‘I said no, but told her that I assumed she wanted one seeing as she was pregnant. It was a lame lie and I’ll admit it, but she looked me in the eye and asked me to return her part of the tip. I did so.

‘Then she talked to my manager. My manager took me into her office and literally shrieked at me until hoarse,’ they added.

The waiter said he told the boss of the restaurant that they didn’t want to be responsible for causing fetal alcohol syndrome, and the manager took them off the work schedule until she ‘decided what to do’.

The server said: ‘She also informed me that I could get the restaurant in serious trouble for discrimination, and upon examination of my state’s laws, she is correct.

‘But when I talked to my mother and father about it tonight, they told me that they understood my position. The entire staff at the restaurant is against me and I think that I’m going to call in and tell my manager that I quit, but I still feel in the right here.

‘I would like some perspective on this and if I’m the a**hole here,’ they added, before thousands of Reddit users gave their opinions on the situation.

Some users strongly disagreed with the waiter’s decision to give the woman non-alcoholic drinks without her permission.

One said: ‘She sucks for obvious reasons, you suck because you had no way to prove she was a pregnant, you altered her drink without informing her, and you made a big decision without speaking to your manager.’

Another user said it wasn’t the waiter’s ‘call’ to make, writing: ‘Unless you saw the woman pee on a pregnancy test, you had no way of knowing for sure that she was pregnant.

‘She could have been talking about someone else, a past pregnancy, or she could be planning to terminate the pregnancy. That wasn’t your call to make,’ they added.

‘I’ve spent most of my working years in food service, and half of that time has been in management. If I was your manager, I would’ve fired you on the spot,’ a third user said.

‘While I agree that pregnant women shouldn’t be drinking, you NEVER change a customer’s order without their consent. If you had an issue with her drinking, you should have taken it to your manager and let her deal with the situation,’ they added.

Meanwhile, some others strongly agreed with the waiter, and said that they also would not have served the woman alcohol.

One wrote: ‘You’d think one of her friends would have said something to her. You probably shouldn’t have made the call but your head was in the right place, I mean jesus…people are acting like you fed a vegan meat intentionally or gave someone wheat when they have a gluten allergy.

‘You didn’t “mess with her food”, you didn’t jeopardize her health or well being AT ALL. I had a friend whose mom drank a lot when she was pregnant and she’s got a ton of allergies and gets sick very easily, almost like a person who was born premature might have; even if she didn’t have FAS, she has problems that likely stem from that behavior,’ they added.

Another wrote: ‘I’m a woman. I don’t think it’s an a**hole thing to do. I’m pro-choice, but I’m not pro intentionally drinking while pregnant. Nope nope nope.

‘Even if it already had a problem, even if she was gonna abort it. I’m actually kinda surprised it’s not illegal to serve alcohol to a pregnant person. NTA, sorry about all the flak you’re getting,’ she added.