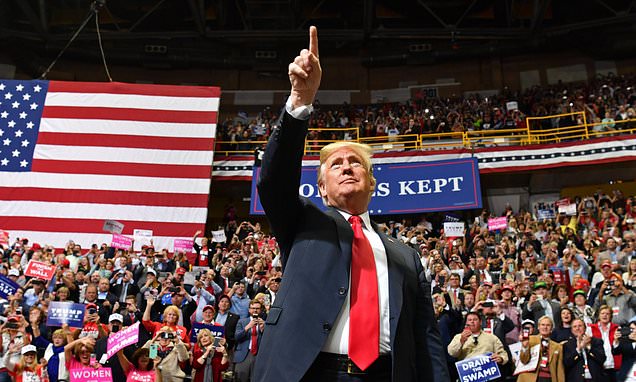 The thunderous cheers and occasional boos inside the arena were pure pantomime, as were the outrageous boasts and whopping lies being told by the night’s main attraction, the President of the United States.

The 12,000-strong crowd that turned out in the Tennessee city of Chattanooga on Sunday night to see Donald Trump ahead of today’s crucial mid-term congressional elections — elections that could fortify or cripple his presidency — were treated to a true showman at work.

He whipped them up into paroxysms of pride in him, their Commander-in-Chief, alternating with semi-hysterical fear of their opponents, whether it was the Democrats who would destroy the U.S. from within, or violent immigrants ‘invading’ from beyond its borders. 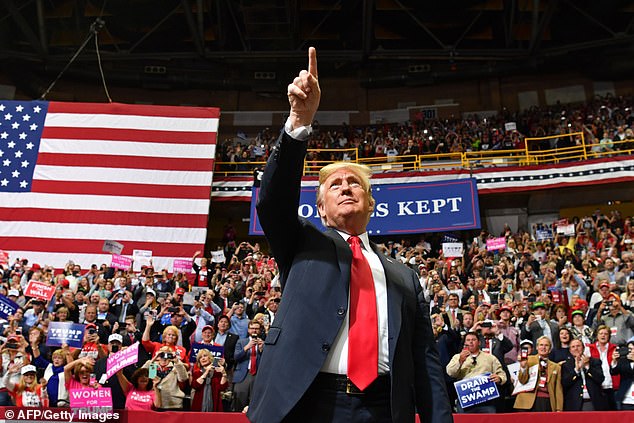 US President Donald Trump is seen arriving for a campaign rally in the Tennessee city of Chattanooga. He was appearing ahead of today’s crucial mid-term congressional elections

Afterwards, the people of this staunchly white and Republican state flooded out into the pouring rain and the cold reality of Trump-era America where protesters armed with megaphones shouted: ‘Stop spreading the hate.’

Some of the bloodiest battles of the American Civil War were fought in this area, and there have been claims that the U.S. faces a new civil war. Certainly, the country is polarised as never before with people far more acrimoniously divided about Trump than when he was elected in 2016.

Increasingly, families and communities across the nation are split by the simple issue of what they think of their President.

A Trump supporter called Steve Spaeth made headlines last week when he admitted telling his liberal, Democrat sister: ‘If there is a civil war in this country and you were on the wrong side, I would have no problem shooting you in the face.’

His chilling comments came just a week after another rabid Trump supporter sent pipe bombs to 14 of the President’s leading opponents. Then a Right-wing extremist gunman who blamed Jewish Left-wingers for encouraging illegal immigration shot dead 11 Jewish worshippers in a Pittsburgh synagogue.

Meanwhile, Trump supporters are no longer embarrassed to admit publicly that they support the President.

In the midst of this bitter conflagration, the man fuelling it was conducting a last-minute blitz of rallies across the U.S. to bolster Republican support in the elections which take place mid-way through a president’s four-year term.

Trump’s name isn’t on any ballot ticket, but the stakes could not be higher in these mid-terms, which involve all 435 seats in the House of Representatives (roughly equivalent to the Commons), and around a third (35) of those in the 100-seat upper house, the Senate.

This is a referendum on his presidency. Until now, Trump’s administration has been far more free of determined political opposition than it might have been, because both the House of Representatives and the Senate have been Republican-controlled. 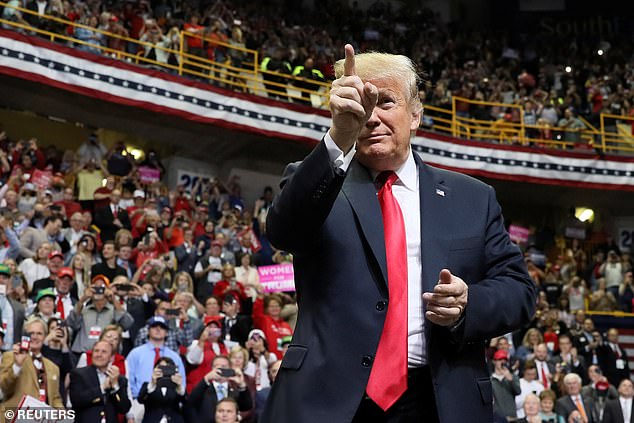 Trump has been heavily campaigning ahead of the mid-term elections, but despite this the Republicans are expected to be hit with heavy losses in the House 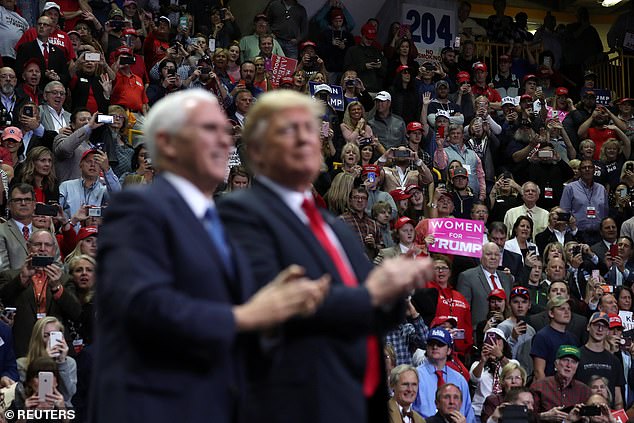 President Donald Trump and Vice President Mike Pencea were both at the rally in Chattanooga, Tennessee. Trump has maintained a busy campaign schedule in the final stretch of the race, with 11 rallies over six days

If, as is widely predicted, Democrats pick up the 23 extra seats needed to give them control of the House of Representatives, the Trump agenda could be submerged in bureaucratic gridlock for the rest of his term.

And a Democrat-controlled House could also order new investigations into the President’s personal and business affairs — and likely try to impeach him.

The Senate looks significantly less likely to go to the Democrats, but nothing is ever certain when it comes to Donald Trump who spectacularly defied pollsters’ predictions in 2016.

The astonishing contradiction at the heart of this divided nation was dramatically illustrated by a CNN poll yesterday. It showed that a majority of voters believe the country is heading in the right direction — thanks largely to a surging economy and jobs boom as Trump has slashed taxes.

But only 39 per cent of them approve of Trump, which is the worst rating for a president at this stage since Dwight Eisenhower in the early Fifties.

Most ominously, the same poll found eight out of ten voters believe the country has rarely been more deeply divided on major issues.

This is particularly bad news for him, as suburban white women played a key role in electing him. Anti-Trump protesters, mainly young women, turned out to make their presence felt in the hours before he arrived at the weekend rally at Chattanooga’s McKenzie Arena.

Tensions rose following the arrival of a small group of Proud Boys, a far-Right, men-only organisation that has been accused of being violent white supremacists. The group sparked outrage last month when members beat up anti-fascist protesters after a Republican event in Manhattan. ‘We’re just showing our support for our President. That’s all,’ said one.

Once inside the arena, it’s hard not to agree with those who say Trump’s hardcore supporters will never lose faith in him. Time and again as I questioned them, they budged barely a millimetre from the belief that he had been an almost unalloyed success.

Some accepted it had come at a price. Trump supporter Angie Lae bemoaned the polarisation of political opinion. ‘People are either 100 per cent pro-Trump or 100 per cent anti. There’s no happy medium,’ she said.

Her husband, Mark, a carpenter, believes Trump is a ‘godly’ president who has put morality back into the U.S.

Tennessee is solid Bible Belt and evangelical Trump supporters had a common refrain when asked why they were still supporting a man who boasts of groping women and has been accused of being a serial cheat. His past was irrelevant, they insist. Everyone makes mistakes. 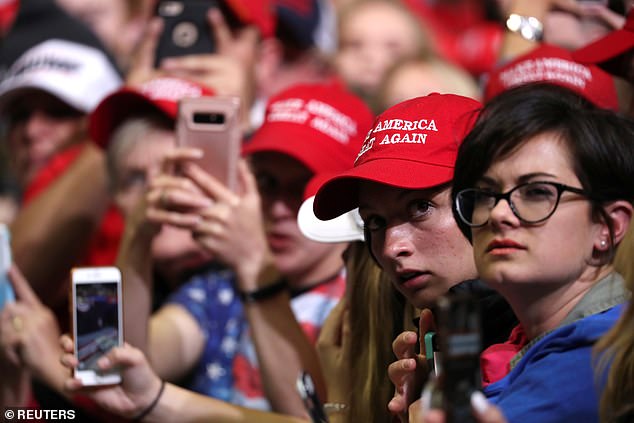 Supporters turned out in their thousands to watch Trump’s rally in Chattanooga, Tennessee. There were around 12,000 in the crowd who watched the US President deliver a speech ahead of crucial mid-term congressional elections

Janice Boydston, a 77-year-old teacher wearing Trump socks, T-shirt and woolly hat, said his foibles paled beside those of Democrats who ‘support abortion, gay marriage and open borders’. ‘There’s no end to the evil that will happen if they get hold of Congress,’ she added.

Southerners pride themselves on their courteousness, but neither side could hide their contempt for their opponents. Danyne Bharj, 47, married to a Briton, articulated the double standards at play, admitting she ‘would never have Trump as my pastor, but I’m happy to have him as my President’.

It’s easier to understand why America has become so toxically divided when one realises both sides cannot even agree on the basics about their President.

They see only a president who has stood up to America’s enemies and trading rivals, defends U.S. borders and brings new jobs.

Trump once admitted he ‘plays to people’s fantasies’ and he saved the biggest fantasy for the end of his speech on Sunday night when he quoted from the Oath of Allegiance’s description of the U.S. as ‘one nation under God’.