Viewers have urged men to pay attention after they were left in shock by a Dispatches documentary about sexual harassment which showed a man following a woman back to her hotel room uninvited after she pretended to be drunk and separated from her friends.

After Undercover: Sexual Harassment – The Truth aired on Channel 4 last night at 10pm, viewers took to Twitter to express their shock at how common sexual harassment is and to praise the ‘brave’ reporter for her experiment.

They described the documentary as ‘a real eye-opener’ after reporter Ellie Flynn explored sexual harassment on dating apps and out on the streets in women of all ages – as young as girls in school uniform.

Viewers became heated as they posted on Twitter about their strong opinions after the programme aired, describing it as ‘shocking, scary, powerful’. They encouraged men to watch the documetary and open their eyes to the scale of the problem.

One man wrote: ‘That was an extremely disturbing watch. Shocking television. Men just hang about to harass women? This was made for us to check ourselves and our peers.

Another said: ‘Lads if you haven’t already then you need to watch #C4SexualHarassment and if you’re not angry about what’s being exposed then you should be.

‘It’s down to us to put a stop to this behaviour wherever we see it, call out and shut down guys around us if we see them doing that s***’ 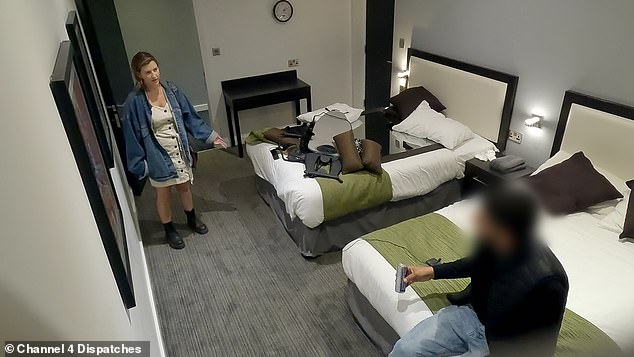 Viewers of Dispatches documentary Undercover: Sexual Harassment – The Truth were left in shock after undercover reporter Ellie Flynn was followed back to her hotel room by a man without consent 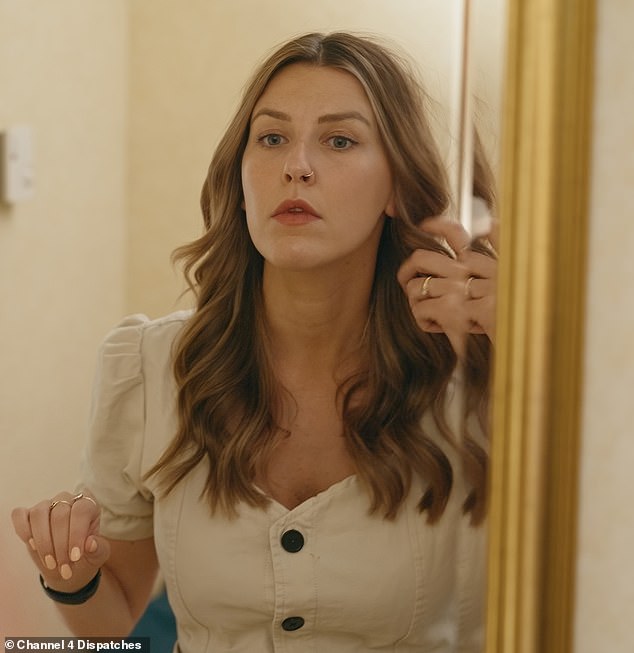 At the beginning of the programme Ellie (pictured), who has plenty of experience going undercover, admitted she was nervous about the experiment

The documentary shows Ellie as she goes undercover and pretends to be drunk on two nights out in Liverpool and London as she staggered back to her hotel. On one of these nights out, a man approaches her and follows her all the way back into her hotel room.

Viewers then see a scene from inside the hotel room, which is created using both Ellie’s body camera and the cameras stationed in the rooms, while Ellie’s voiceover says: ‘I can’t believe this man has followed me all the way back to my hotel room. It’s time for me to confront him’.

In the footage, ‘drunk’ Ellie directs the man to ‘sit there’ as she points to a bed.

As the man, whose face has been blurred out and whose voice has been altered, tries to take off his shoes, Ellie’s voice becomes more commanding as she says: ‘sit down there’.

He sits on the bed before Ellie, now appearing completely sober, asks him: ‘Why have you followed me here?’ to which the man replies: ‘I like you.’

Ellie defiantly replies: ‘I didn’t give you any indication that I wanted you to follow me here. So why have you followed me here?’

The man, who is carrying a can of Red Bull, replies: ‘We came together.’

Ellie then shakes her head and replies: ‘No, I told you I was fine on my own.’

The documentary notes UN Women UK statistics from March 2021 which revealed 71% of women of all ages in the UK had experienced some form of sexual harassment in a public space.

At the beginning of the documentary Ellie is filmed putting on her make up ahead of the experiment while she has cameras fitted to her body – events which lead to the chilling confrontation.

She says: ‘I’m feeling nervous. I’ve been undercover before but this feels… it just feels like it’s got higher stakes, I think.

We then see body camera footage of her breathing deeply as she walks down the hotel corridor to head out onto the streets – an indication of the nerves she is feeling.

As her experiment gets underway, Ellie is seen sitting on a bollard outside some bars, swaying as she pretends to be intoxicated while rolling a cigarette.

Within minutes, a man calling her ‘darling’ hovers over her and says: ‘Come home with me. We go to hotel.’

She refuses his offers and says: ‘No I’m fine,’ before she gets up to leave. He then follows her and says: ‘I like you.’

In the next chilling clips, Ellie stumbles through quiet streets with the man at her side as he asks her to smoke weed with him and go back to a hotel together. Each time, she tells him she is ok on her own.

After the clip was shown, people reacted to the shocking footage on Twitter. One person wrote: ‘Sad to see how we have digressed in society and how unsafe our streets are for young women enjoying themselves.’

Another concerning clip from the documentary showed Ellie speaking to a group of female school pupils who appeared to be in their early teens.

The pupils and their teacher have started a petition to ban sexualised school uniforms from being sold online as raunchy fancy dress outfits – and also for them to no longer be featured in pornographic films.

As Ellie sits down with the pupils in their classroom, she asks: ‘How many of you have experienced sexual harassment in some way?’ 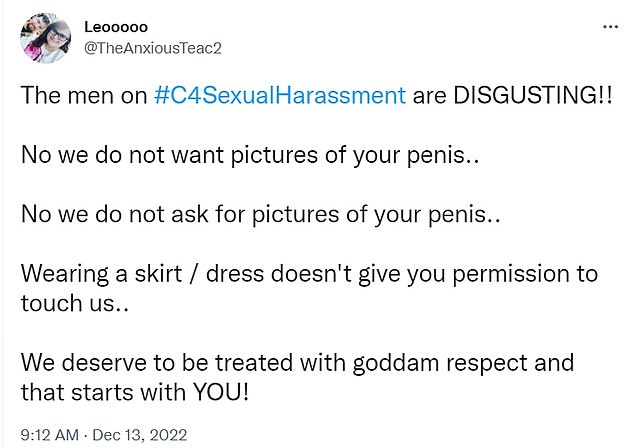 The girls look a little unsure, before a vast majority raise their hands to signal that they have been sexually harassed in the past.

A statistic is shown which reveals over half of girls have experienced public sexual harassment while they were wearing their school uniforms.

Many viewers were seriously concerned to hear about the pupils’ experiences, and expressed their disgust on social media.

One man tweeted: ‘As a dad of two girls #C4sexualharassment is a rough watch (especially when @ellieflynn interviews girls in school).

Another aspect of harassment Ellie explores in the documentary is unsolicited nude images sent on dating sites, after women in their droves got in touch with her to share their experiences of it happening to them.

She sets up a dating app profile on three of the top sites using the pseudonym ‘Lucy’, and soon receives incredibly explicit messages from men in their 40s and 50s whom she has matched with.

Astonished at the content of the messages, Ellie says: ‘This isn’t even real. I’m pretending to be on a dating app and I am exhausted by the amount of sexual and inappropriate messages that I’ve received.’

Two weeks after setting up the profile, Ellie says she has received nude images from men almost every single day, and is still receiving other explicit messages. She decides to video call some of the men to confront them over why they have sent the images.

One man laughs and asks: ‘Why, you don’t like it?’ while another says he wanted ‘a bit of casual fun’.

Another explains that he sends explicit images ‘to everybody’.

One of the men justifies his behaviour by saying: ‘Women aren’t very good at saying they’re interested is my interpretation on it.’

Later in the documentary, footage cuts back to Ellie’s experiment on the streets of Liverpool as the man who began tailing her outside of a bar follows her back to her hotel room.

Bodycam footage shows Ellie walking into the hotel lobby. As she walks, the man can be overheard saying: ‘Me, I’m happy with you. Me, I’m a good man.’

When Ellie says: ‘I’m going home’, he replies: ‘You come home with me?’

As she walks into the hotel lobby, where there are security guards present, and then walks into the lift where a crew member is waiting for her, the man is not deterred and continues to follow her.

Viewers then see Ellie confront the man and ask him to leave. After hesitating and asking her for a kiss, he finally leaves the room, at which point the reporter is visibly shaken. She opens the door to the bathroom in the suite, where a member of her security team has been hiding on standby, and hugs him. More team members then enter the room to comfort her.

Reflecting on the confrontation, Ellie says: ‘It’s scary how quickly how quickly it happened and how easy it was for him… he didn’t seem to bat an eyelid at it.’