Regional Victoria’s property market is booming, building approvals are surging and house prices and rental costs soaring – and the Victorian government expects the population flow from Melbourne to the regions will continue.

Residential building approvals have now increased by more than 65 per cent compared with Melbourne, where the increase was just over 20 per cent. 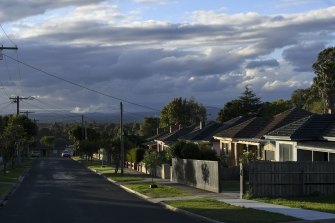 The budget papers show in the seven months to April this year, house prices in regional Victoria rose by a whopping 12.9 per cent.

Regional employers, particularly in the tourism sector, say a severe lack of affordable housing is hampering their ability to attract workers.

Regional Development Minister Mary-Anne Thomas said the government was aware of the problem and part of the challenge was a lack of housing.

Ms Thomas pointed to the government’s $5 billion commitment to building social housing, saying a quarter of that sum would be spent in rural and regional Victoria.

But it’s not yet clear where all those homes will be built or how many will be delivered.

Earlier this year, Australian Bureau of Statistics figures showed Melbourne experienced a 30 per cent collapse in the number of people relocating to the city.

Ms Thomas expected the regions would continue to lure Melburnians.

“We have seen an unprecedented migration from the city to rural and regional Victoria. Only time will tell if this is a long-term shift. My expectation is that we will see people continue to settle in regional Victoria.”

The government has committed $47 million to tackle the rough sleeping crisis that will include outreach teams in Geelong, Swan Hill, Bendigo and Warrnambool.

It also has high hopes that the domestic visitor economy will rebound from an expected $5.1 billion for 2020/21 to $11.1 billion in the coming financial year.

Meanwhile, the Environment Department’s biggest spend is on bushfire preparation, with $517 million to maintain the existing planned burn program, increase mechanical and other non-fuel treatments and remove long grass and “flammable undergrowth”.

The number of strategic fuel breaks built or upgraded will increase from 480 last year to about 960, the budget papers reveal.

This focus could be controversial, given community concern about the impact of planned burns after endangered species lost habitat in the 2019/20 bushfires.

With an increased public interest in Aboriginal cultural burns and their role in bushfire risk management, about $22 million will be spent on preparation in local communities.

In the state’s east and north east, about $45 million will be invested on restoration of waterways, including the Mitchell, Mitta Mitta and lower Wimmera rivers. This will include money to boost the health of the Gippsland Lakes.

The government estimates this waterways work will create about 90 jobs in regional areas over the next three years.