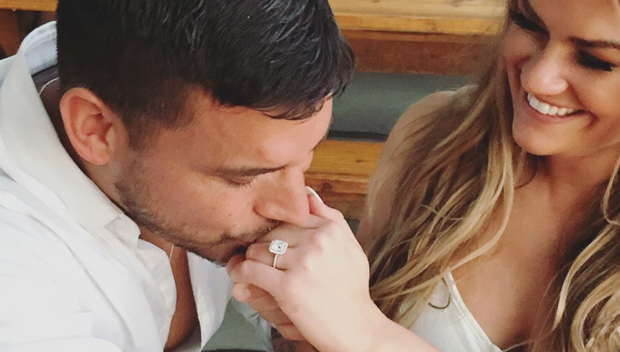 Thanks to the Dec. 3 season premiere of ‘Vanderpump Rules’, we now know how Jax proposed to Brittany this past June. Get all the romantic details, here!

We already knew Jax would propose to Brittany since it happened on June 7 and was publicized all over social media this past summer, but we had no idea they became engaged after a brief split, during which she hooked up with her ex-boyfriend! This was all revealed during the Season 7 premiere of Vanderpump Rules on Dec. 3. So let us rehash it all for you! Just weeks after Jax’s dad died, he took the money that was left to him and purchased a diamond ring for Brittany that cost somewhere around $70,000! He said she deserved it — plus, every time he looks down at her ring, he’ll think of his dad.

Anyway, just before picking up the ring, Jax told a selected few that he’d be proposing soon. And by few, we mean Tom Schwartz, Tom Sandoval and Stassi Schroeder. Yes, Jax’s ex was the only female to know about the proposal before it actually happened. To be honest, we found it refreshing to see Jax sharing this sort of information with Stassi, who now seems to be one of his best friends — all these years after their toxic relationship ended. Anyway, she had a hard time keeping the secret, but she managed… until the very last second. Fortunately, by the time she told Katie and Kristen what was going on, Jax and Brittany had already left for their date, where he planned on proposing.

Jax took Brittany to Neptune’s Net in Malibu because he claimed it had “character”. And by character, he meant portable toilets and greasy food. Anyway, after arriving to the restaurant via a ride by Lyft (that ride from West Hollywood to Malibu must have cost them a fortune!), Jax barely made it through ordering their food without fainting. He was sweating and fidgeting, yet Brittany didn’t seem to have a clue as to what was going on, which was endearing and rather sweet to witness. And finally, when their food was ready, Jax fetched a tray at the counter, put the ring box on top, and walked over to Brittany before getting down on his knee to propose! She was floored and her eyes watered up as he asked her to be his wife. A question to which she obviously answered yes! And so there you have it — that’s how Jax and Brittany became engaged.

I still can’t stop smiling ❤️ I love you @mrjaxtaylor

Omg omg!!!!!!!! We are ENGAGED! What a way to start our summer and season 7!! I am so happy, so in love, and so beyond excited for this next chapter of our lives! I can’t wait for all of you to see how he proposed! I am the happiest girl ever right now. ?? love can win ?? #PumpRules thank you @kylechandesign this ring is gorgeous!!!

Next week, everyone will meet at Jax and Brittany’s apartment to celebrate — as seen in the preview clip for the Dec. 10 episode — but James Kennedy won’t be there. After he dissed Jax in a See You Next Tuesday rap, and subsequently humiliated Brittany at SUR, they decided to cut him out of any future events they’d be hosting. And they’re not the only ones. Lala also decided to cut James out of her life after he approached her and her boyfriend, Randall, and laughed over the fact that they had both slept with Lala. Her man found him to be very inappropriate, and so did she, so she put a stop to their friendship.

Oh and side note: before they got engaged, Brittany told Stassi that she and Jax had taken a short break after he cheated on her, during which she went back home to Kentucky and slept with her ex, Aaron. Jax is well aware of their hookup, so it likely won’t cause any drama for them going forward, but it definitely took us, as viewers, by surprise!