Crossbench MPs have declared there are still major sticking points with the federal government’s proposal for a national corruption watchdog as Prime Minister Anthony Albanese tries to avoid breaking a key election promise to legislate the body by the end of the year.

The crossbench MPs are worried Labor’s integrity commission will not be broad enough to go after corrupt union officials and businesspeople who seek to influence the government, as well as a lack of protection for whistleblowers, and independent funding. 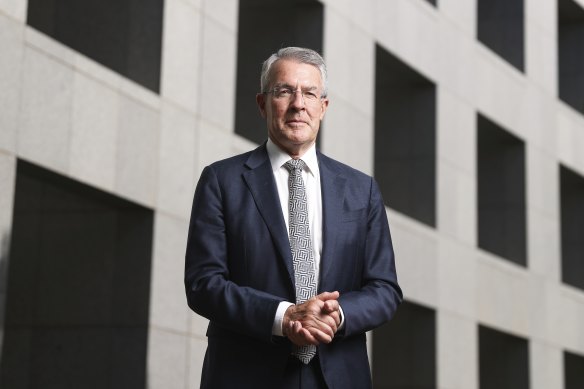 Attorney-General Mark Dreyfus says passing the legislation by the end of this year will allow the body to be operational by mid-2023.Credit:Alex Ellinghausen

After the government introduces the legislation next week, it will be sent to a joint select committee of parliament to review, with the crossbench to use that time to try to convince Labor to address their outstanding concerns.

The Sun-Herald and The Sunday Age can reveal the government will look to set a date for the parliamentary committee to report back before the final sitting fortnight begins on November 21, giving it enough time to pass the legislation by the end of the year. According to both government and crossbench sources, it is likely they will settle on a reporting date in mid-November.

There has been growing concern from some crossbench MPs that Albanese would fail to pass the legislation this year after the government suspended parliament to mark the death of Queen Elizabeth II. This was heightened when Albanese last week claimed his election commitment was to introduce the legislation by the end of 2022, despite originally promising in April to “legislate it this year”.

Attorney-General Mark Dreyfus said he would introduce the legislation next week to “establish a powerful, transparent and independent National Anti-Corruption Commission to investigate serious or systemic corrupt conduct across the entire federal public sector”.

“This legislation honours a key commitment to the Australian people and is central to the Albanese government’s commitment to tackle corruption and restore trust and integrity to government,” he told this masthead.

“Passage of this legislation by the end of the year will enable the commission to commence operation in mid-2023.”

Crossbenchers want the agency’s powers to be broad enough so that it can capture instances of potentially corrupting conduct by third parties in relation to government policies, rather than just being able to examine third parties with government contracts.

This would allow the commission to investigate people other than public officials – including corrupt union officials and businesspeople – who don’t have contracts with the Commonwealth.

Asked whether it would cover third parties corruptly influencing government policies, a spokesperson for Dreyfus said the body would have “broad powers to investigate allegations of serious or systemic corruption of a public official”.

While Haines said the seven design principles laid out by Labor ahead of the election aligned with her views, “a number of issues that have been raised in the consultation process … remain unresolved”.

“These are not small matters and if they are not addressed in the government’s legislation, I want the parliament to debate them fully and properly, without being constrained by an arbitrary deadline,” she said.

Haines also criticised Albanese for last week suggesting that any delay to the passage of the legislation would be “because of non-Labor members of the House of Reps and of the Senate”.

”As I have said to the prime minister and to the attorney-general, I am committed to working in good faith with the government to get the best integrity commission possible, without playing politics or point scoring.

“With that in mind, it was very disappointing to hear the prime minister’s recent comments that implied crossbench MPs and senators will be to blame for any delay to the National Anti-Corruption Commission.“

Independent senator David Pocock, whose vote could be crucial, agreed with Haines that the integrity body’s powers should be broad enough to go after a range of third parties.

“Corruption often stems from outside government and must be addressed at the source,” he said. “There can be no carve-outs or sweetheart deals.”

Tasmanian independent Andrew Wilkie said it was important the body “be empowered to consider any potentially corrupting conduct by third parties in relation to the business of government”.

“This would include, but not be limited to, contractors, consultants, lobbyists, developers, donors and union officials.”

Asked whether it would have any problem with the body investigating union officials, ACTU secretary, Sally McManus, said the union movement had “for years supported the establishment of an integrity commission and welcomes the Albanese government’s commitment to bringing this forward this year”.

Sydney barrister Geoffrey Watson, director at the Centre for Public Integrity and a former counsel assisting the NSW Independent Commission Against Corruption, said third parties should be targeted if they attempted to distort a policy for an improper purpose.

“For example you might have a genuine political belief that a policy should develop one way or another, but if you’re doing it to acquire some advantage for some individual or organisation who is a third party to you – that ‘soft’ or ‘grey’ corruption is sometimes of a serious kind.”

But Watson said an anti-corruption commission was “10 years overdue” and the government is unlikely to get everything right straight away.

“All statutory bodies with this kind of jurisdiction have had to be amended, tinkered with, or altered, to adjust with the times,” he said.

Crossbenchers want stronger whistleblower protections to be legislated concurrently, independent funding for the commission, the power for the body to initiate its own investigations and independent representation on the parliamentary oversight committee.

The government has committed to a separate process for protecting whistleblowers, while it is not expected to agree to any mechanism to bind future parliaments on the level of funding.