Universal Orlando has pulled some of Dr. Seuss' books from its gift shops and is contemplating further changes to the resort after it was announced that some books from the author's collection would no longer be offered due to racist and insensitive imagery.

On Tuesday, Dr. Seuss Enterprises, the entity that preserves and protects the author’s legacy, announced it would stop publishing six of the author's well-known books, including “And to Think That I Saw It on Mulberry Street” and “If I Ran the Zoo,” because they "portray people in ways that are hurtful and wrong."

The books in question are featured at Universal's Island of Adventure theme park in an area known as Seuss Landing, according to Spectrum News. The children's area is known for having characters and attractions inspired by the world created by Dr. Seuss — born Theodor Seuss Geisel.

“We’ve removed the books from our shelves as they have asked and we’ll be evaluating our in-park experience too," a Universal spokesperson told FOX Business in a statement. 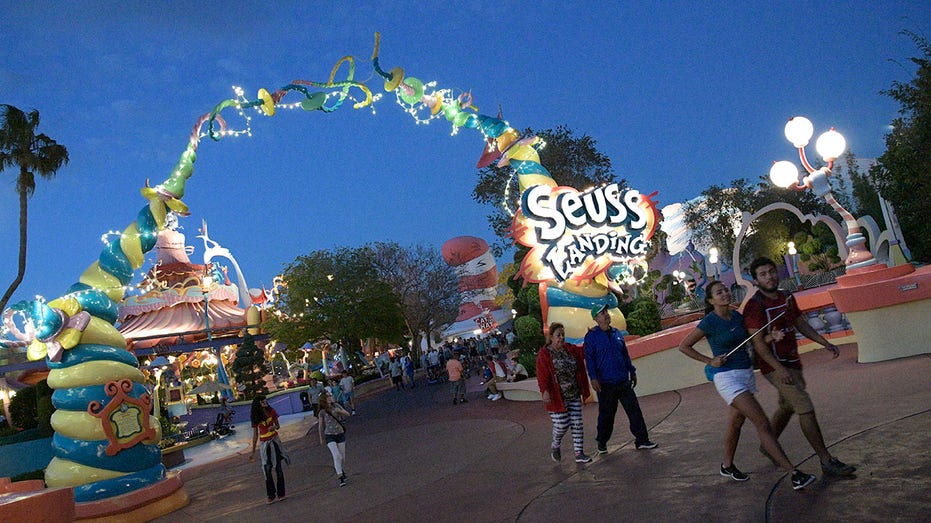 Visitors walk through the Seuss Landing area of the Islands of Adventure theme park at the Universal Orlando Resort in Orlando, Florida on March 26, 2017. (Phelan M. Ebenhack via AP)

One play area is based on the book "If I Ran the Zoo," which includes a drawing of two bare-footed African men wearing what appear to be grass skirts with their hair tied above their heads.

It is unclear what areas or park experiences Universal plans on reevaluating.

However, in the meantime, guests can still "enjoy their favorite experiences at Seuss Landing," the spokesperson said.

Dr. Seuss is adored by millions around the world for the positive values in many of his works, including environmentalism and tolerance, but criticism has grown in recent years over the way Black, Asian and other people are drawn in some of his most beloved children’s books, as well as in his earlier advertising and propaganda illustrations.

These also include "McElligot’s Pool," "On Beyond Zebra!," "Scrambled Eggs Super!" and "The Cat’s Quizzer."