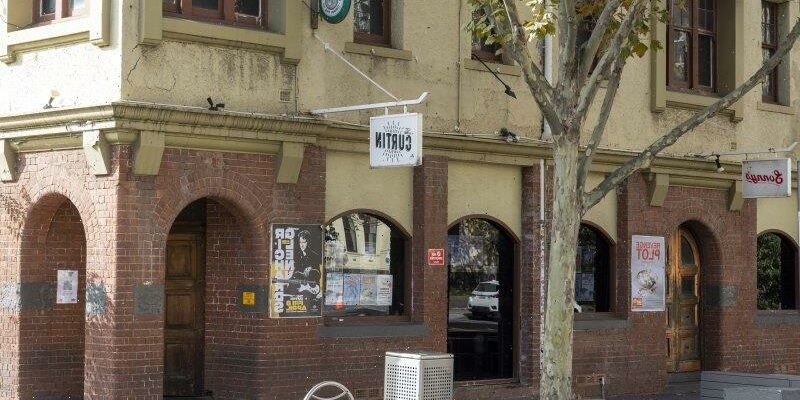 Construction workers in Victoria will be banned from redeveloping the John Curtin Hotel as part of a union-led protection of the Carlton pub and its Labor Party history.

A rare “green ban” has been imposed by the building industry group of unions — the CFMEU, Electrical Trades Union, the Plumbing and Pipe Trades Employees Union, and the Australian Manufacturing Workers Union — meaning they will advise all members against working on the site following its sale to an overseas buyer. 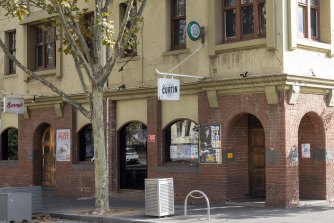 Secretaries of the unions on Thursday unanimously agreed to the green ban, a practice popularised in the 1970s and credited with saving the City Baths, the Regent Theatre, Flinders Street Station and Queen Victoria Market from development.

“We’re going to protect this institution,” Victorian Trades Hall secretary Luke Hilakari told The Age. “We won’t let our heritage be trashed. This is not a building you should touch.”

Managers of the Carlton pub – which is named after wartime Labor prime minister John Curtin – earlier this year announced the venue would close when its lease expires in November after owners listed the building for sale with an asking price of $6 million.

The sale was finalised this month. Agent CBRE would not confirm details, but an industry source said the buyer was an overseas-based developer. 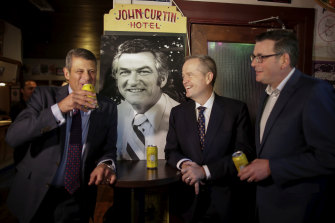 Former premier Steve Bracks, then-opposition leader Bill Shorten and Premier Daniel Andrews share a beer in memory of Bob Hawke at The Curtin in 2019, following the death of the former prime minister.Credit:Alex Ellinghausen

Hilakari said that was despite RMIT university and the ETU making a larger, failed joint bid to purchase the venue.

The unions last imposed a green ban six years ago at the site of the Corkman Irish Pub, which was demolished by its owners.

Hilakari said the ban would make it tough for anyone to develop the venue into apartments, and he urged the state government to step in to protect significant pubs and live music venues.

“If someone was trying to come in there with a bulldozer, it would be all of us and half of Melbourne standing in front of that bulldozer,” he said.

He said the unions could remove the ban, if there was a proposal that retained the pub and was supported by other stakeholders, such as Melbourne City Council and the music community.

The Trades Hall and the National Trust jointly nominated The Curtin, as it is commonly known, to the state Heritage Register for its deep Labor, union and music history dating back to the 1800s.

The Trades Hall opened in 1859, the same year a hotel was established on the site across from where The Curtin stands today. The pub, in those days called the Lygon Hotel, was redeveloped in 1915 before its name changed to the John Curtin Hotel around 1969, when Bob Hawke was elected president of the Australian Council of Trade Unions.

The application also said the site was significant for its ongoing role as a music venue and history hosting fortnightly Aboriginal band nights in the 1980s and 1990s.

Heritage Victoria – part of the Department of Environment, Land, Water and Planning – is reviewing the application and will make a recommendation to the Heritage Council, an independent body that would make the final decision.

The City of Melbourne has provided interim protection of the pub as “significant” local property, a lower level of recognition than the state register.

Deputy Lord Mayor Nicholas Reece said venues like The Curtin had heritage value, not just as buildings, but for irreplaceable cultural and social value.

“The Curtin has been a community meeting place for more than 160 years. Our goal is to ensure that it remains a pub and live music venue, and doesn’t become a facade with a block of apartments behind it,” Ambrose said.