In a dramatic but unsurprising finish, Ukraine has won the 66th annual Eurovision Song Contest. Though the UK, Spain and Sweden put in a valiant fight, it was Ukraine’s Kalush Orchestra, singing Stefania, that won the day.

Australia, competing for the seventh time, came in 15th place of 25 countries competing in the final. Singer Sheldon Riley delivered his best vocal performance in the competition so far, finishing in tears and winning commanding applause from the audience in Turin, Italy. 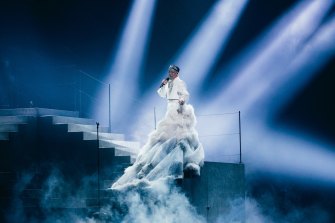 But despite a strong score for Australia from the professional juries, we received just two points in the public voting phase of the competition. That brutal verdict from Europe’s TV-viewing audience pushed Australia out of the final top 10 with a total of 125 points.

In a curious twist, the European Broadcasting Union (EBU), which produces the event, advised media during the broadcast that certain “irregular voting patterns were identified in the results of six countries”. The irregularities impacted the scoring in both the second semi-final and today’s final.

“The EBU takes any suspected attempts to manipulate the voting at the Eurovision Song Contest extremely seriously and has the right to remove such votes,” the statement said. 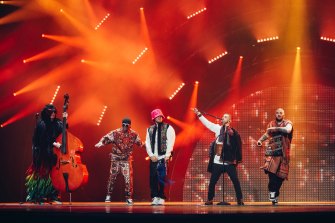 The EBU said an aggregated result had been calculated for the affected countries. The recalculation resulted in an extended interval, which pushed the telecast into overtime. The six affected countries have not been identified.

The final rankings are calculated using a combination of professional music industry juries in each of the competing countries, and “tele-votes” from the TV audience, including Australians watching the live broadcast.

After their performance, Ukraine’s Kalush Orchestra’s Oleh Psiuk shouted from the stage: “Help Ukraine, Mariupol, help Azovstal right now!” The comments referred to the Ukrainian city of Mariupol, and the Azovstal steelworks where, according to reports, around 600 heavily wounded Ukrainians are under siege.

Strictly speaking, the Eurovision rules require national delegations to “make sure that the Eurovision Song Contest shall in no case be politicised”. Under normal circumstances, Psiuk’s comments from the stage might have invited disqualification, but it is extremely unlikely the EBU will act. 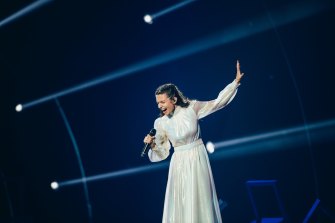 The result means that Ukraine becomes next year’s “host” country, however the Russia-Ukraine conflict means it will almost certainly be unable to host the contest in practical terms. The EBU would customarily offer it to the next highest scoring country – the UK – before looking elsewhere.

Swedish newspaper Aftonbladet has reported that Stockholm’s mayor, Anna Konig Jerlmyr, has contacted the Ukrainian ambassador to Sweden to offer her city as an alternative.

The road to Eurovision is long and bloody. Along the way countries were tossed to the side in two sudden-death semi-finals, including Israel, Georgia, San Marino and Cyprus. Even “Malta” Goodrem, the piano-playing Delta-knockoff, who looked promising for a moment, did not make it to the final.

Despite the proliferation of English-language songs in the competition’s recent history, this year marked an unusual shift into native language. Songs in Portuguese, Italian, Spanish, Dutch, Ukrainian, Lithuanian, Icelandic, Serbian, and even Latin and Breton, were performed. 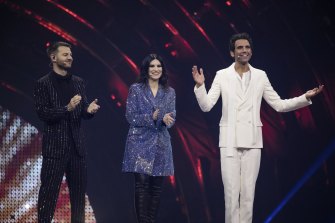 In contrast, the English-language lyrics sometimes slid into the kind of nonsense that gave Eurovision its well-earned reputation for camp and frippery. Take Norway’s Give That Wolf A Banana for example: Is that saliva or blood drippin’ off your chin? / If you don’t like the name Keith I’ma call you Jim.

That said, it was a fairly rambunctious Eurovision. Spain’s SloMo, performed by Chanel, had everyone in the backstage press centre up on their feet dancing. And Moldova’s Trenulețul, performed by Zdob și Zdub and the Advahov Brothers, prompted something only Eurovision could: a backstage conga line.

Riley’s journey to Eurovision began with seeing drag performer Conchita Wurst in the 2014 contest. “I got in so much trouble because I loved, loved her,” Riley said. “I wanted to know everything about Conchita. It was an obsession. But it was more than that.”

That journey came full circle just hours before Riley’s appearance in the Eurovision final, when Wurst visited the press centre in Turin to meet with Riley in person. “I think I find it so easy to dress up now because once you’ve felt a lot of pain, a lot of heartache, nothing is really a big deal any more,” Riley said. 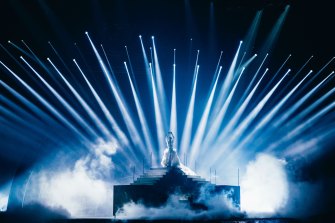 A total of 35 countries, including Australia, competed in two semi-final heats, with the 10 winning countries from each advancing to the final, where they met the so-called “big five” – France, Germany, Spain, the UK and Italy – who automatically book a place in the final.

Australia went into the final positioned in 21st place out of 25 in the running order, a position that many considered to be advantageous. There is a general perception that competing in the second half of the lineup is better, and that the songs performed in the final half-dozen are freshest in the memory of the tele-voting TV audience.

One of the night’s highlights was a return to the Eurovision stage for Italian singer Gigliola Cinquetti won Eurovision for Italy in 1964 with the song Non Ho L’eta. She returned to the stage today, 58 years later, to perform the song a second time.

This year marks Australia’s seventh Eurovision campaign; our best scoring entrant was Dami Im in 2016 with Sound of Silence, securing 2nd place out of 26 finalists.

The consensus is 2022 has delivered a successful Eurovision, despite a decision by the European Broadcasting Union (EBU) to expel Russia, which competed 23 times since its debut in 1994, in the wake of the Russia-Ukraine conflict.

The move, the result of internal pressure from other competing countries, who threatened to withdraw if Russia was allowed to participate, marked the first time in the competition’s six-decade history that an artist was effectively penalised for a member government’s actions.

The competition was held in the PalaOlimpico, in the Italian city of Turin; Italy has previously hosted the competition in Naples in 1965, and Rome in 1991. The television audience for Eurovision is estimated at 182 million viewers, including TV audiences in the 40+ participating countries, the US and via YouTube.

The final of the 66th Eurovision Song Contest will be repeated tonight at 7.30pm on SBS.