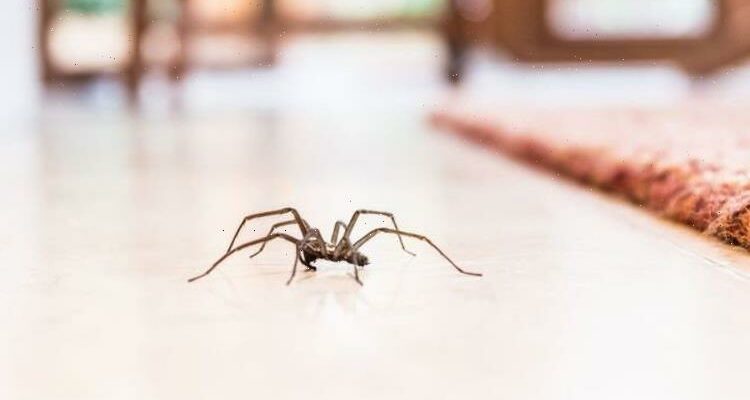 Each year as the weather begins to cool and grow wetter, UK residents may experience an increase in the number of house spiders crawling into homes. For those with arachnophobia or simply a dislike of the eight-legged insects, this time of year can be hard to bear. However, despite the fear associated with giant house spiders, the creepy-crawlies are good for the environment.

Giant house spiders, or Eratigena atrica, are one of the biggest spiders in Central and Northern Europe.

These spiders are dark brown in appearance, often with a lighter marking on their sternum.

They can grow as big as 12cm in length, and as the weather cools down will be increasingly more visible in UK homes.

The reason for this is at this time of year the male spiders are on the hunt for mates.

Drusillas Park’s Spider expert, Angela Hale said: “As we approach the autumn season, adult male spiders will be starting to move around and look for mates, so it will appear as though there are suddenly a lot more spiders around.

“Lots of female spiders will also be pregnant at this time of year so they will appear larger and a little clumsier as their bodies are swollen with eggs.

“Due to the temperate conditions a lot of people have been out working in their gardens and spending time outdoors.

“They are therefore noticing the spiders more, as they are larger and therefore more visible at present.”

There is also a lot of food around for spiders right now as Ms Hale explained: “milder weather has meant there are a lot of insects around at the moment, providing an abundance of food for spiders to feast on.

“This has allowed spider populations to soar.”

Despite many fearing the eight-legged creatures, Ms Hale stressed: “Our native spiders pose no threat to us.

“They are essential to our ecosystem; they are our friends, not our enemies so we need to find a way to learn to live alongside them.

“They really are more scared of you than you are of them and would much rather run away.”

If you do find a spider in your home and would rather it not be there, here is one safe way to remove it without hurting it.

You will need a glass or plastic cup and a bit of stiff card or paper.

Pop the cup over the spider, then slowly insert the card under the cup, carefully so as not to trap any of the spider’s legs.

Carry it outside holding the glass and card together, and release it once you have found a suitable space.

If you would like to combat your fear of eight-legged creepy crawlies or learn more about spiders, Drusilla Park in East Sussex is holding Spider Saturday on October 12.