The U.S. State Department has revoked a policy that made it difficult for the children of same-sex parents to recognized as U.S. citizens at birth. The previous policy stated that both parents had to be biologically related to a child in order for them to be recognized as a U.S. citizen at birth.

So, if one person in a couple was not a U.S. citizen, and that person was the biological parent of their child, the child was also not a citizen. Such was the case for Elad Dvash-Banks and his partner, Andrew Banks, who had twins together, conceived via surrogate in Canada.

However, since Dvash-Banks is an Israeli citizen, under the former policy, Ethan was not a U.S. citizen either – despite the fact that Andrew Banks is also his father. 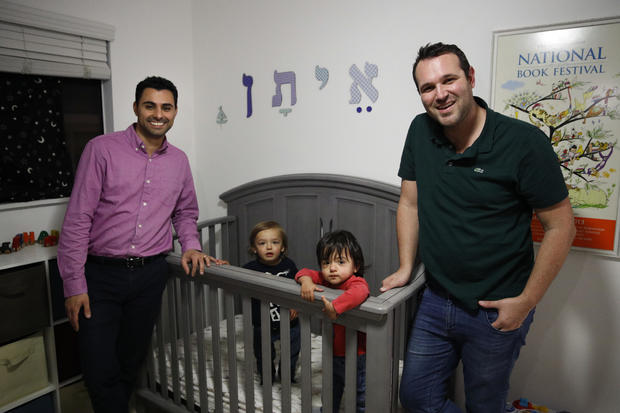 A federal judge ruled that Ethan was a citizen at birth in February 2019, but the State Department appealed that decision later that year.

The department insisted a married U.S. citizen must have a biological connection to their child to pass on birthright citizenship, according to Immigration Equality, an LGBTQ immigration rights organization.

However, under the Immigration and Nationality Act, there is no requirement for a biological relationship for married parents, according to Immigration Equality. Every federal court that heard the issue decided the State Department’s policy was inconsistent with the statute.

So, as of Tuesday, the State Department’s policy has changed. “Children born abroad to parents, at least one of whom is a U.S. citizen and who are married to each other at the time of the birth, will be U.S. citizens from birth if they have a genetic or gestational tie to at least one of their parents and meet the INA’s other requirements,” the department said.

Like the Dvash-Banks family, the women could not get married in the U.S. because of the Defense of Marriage Act. So, they tied the knot in London. That is where their sons, Lucas and Massi, were born. Massi was carried by Blixt. Lucas was carried by Zaccari — and because she was an Italian citizen, he was not recognized as a U.S. citizen. The couple also sued the State Department.

The State Department’s policy also deemed Blixt and Zaccari’s children to be born out of wedlock – which was also at odds with the Immigration and Nationality Act, according to Immigration Equality. The U.S. now recognizes their marriage as legal.

Now that the policy change has been made, both of their children can be recognized as U.S. citizens.

“We are relieved and thankful that our fight for our family to be recognized by the government has finally ended,” Blixt said in a statement. “We knew we would succeed eventually, as trailblazers before us fought and won marriage equality.  Our marriage is finally recognized and treated equally. Lucas, who made me a mother, is will finally be treated as my son and recognized as American, as his brother always has been.”

The new policy will allow increased numbers of married couples to transmit U.S. citizenship to their children born overseas, the State Department said. However, requirements for children born to unmarried parents remain unchanged.

CBS News has reached out to Immigration Equality and the U.S. State Department for comment and is awaiting response.