Two federal ministers have backed a One Nation motion condemning the use of medical treatment for transgender children in a vote that split the Coalition.

Attorney-General Michaelia Cash and National Disability Insurance Scheme Minister Linda Reynolds were among 21 Coalition senators who supported the motion put by One Nation’s Malcolm Roberts on Tuesday evening after the government granted its members a conscience vote. 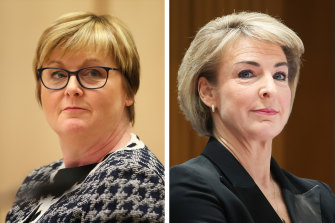 Linda Reynolds and Michaelia Cash both backed a One Nation motion condemning the use of medical treatment for transgender children.Credit:Alex Ellinghausen

Senator Bragg said he was happy the motion was defeated. “Supporting minorities is an important part of the liberal tradition,” he said.

Australian guidelines already say people should be over the age of 18 before having gender-confirmation surgery. Puberty blockers – medicines that pause puberty – are reversible.

Assistant Minister for Forestry and Fisheries Jonathon Duniam, who voted for the motion, told the chamber the government was committed to ensuring the safety and wellbeing of young Australians.

“We acknowledge that the clinical treatment of children experiencing gender dysphoria is a complex and evolving area and that more research is needed,” he said. He noted that states and territories had “primary administrative and clinical responsibility and control” of the relevant services.

Some senators said they supported transgender people but did not support irreversible treatment for children.

Greens senator Janet Rice condemned the motion, saying transgender and non-binary people were valid and deserving of love and support.

“For some of them, medical support to affirm their agenda is life-saving. This motion is harmful, it’s full of misrepresentation, misinformation, fear-mongering and it’s got no place in our Parliament,” she said.

Labor opposed the motion and did not have a conscience vote. Some senators were absent because of an agreement between parties, in a process known as pairing, to match the number of senators who were not present for approved reasons.

The last time the Coalition was allowed a conscience vote in the Senate was to congratulate the NSW Parliament for passing a bill to decriminalise abortion in 2019. Four Liberal senators supported that motion, brought by Greens senator Merheen Farqui.