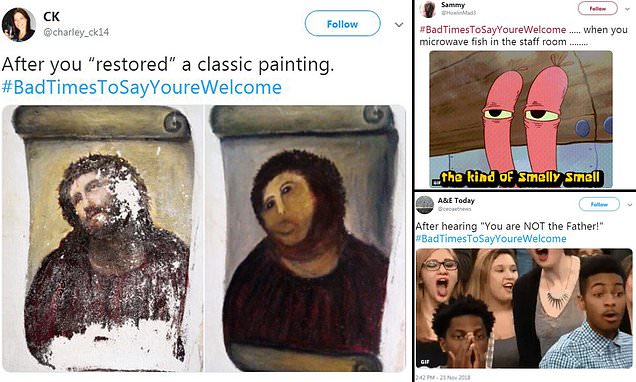 ‘When you bring a DNA test to a baby shower’: Witty Twitter users reveal the ‘worst times to say you’re welcome’ in a hilarious viral thread

Saying ‘you’re welcome’ is generally considered a mannerly response under most circumstances in life, however a recent viral Twitter thread has revealed how rude – and entertaining – the phrase can be when used in the wrong circumstances.

The Twitter thread, which was first started on Friday, includes tweets from hundreds of people from around the world, all of whom shared their thoughts on what makes for the worst possible time a person could say ‘you’re welcome’. 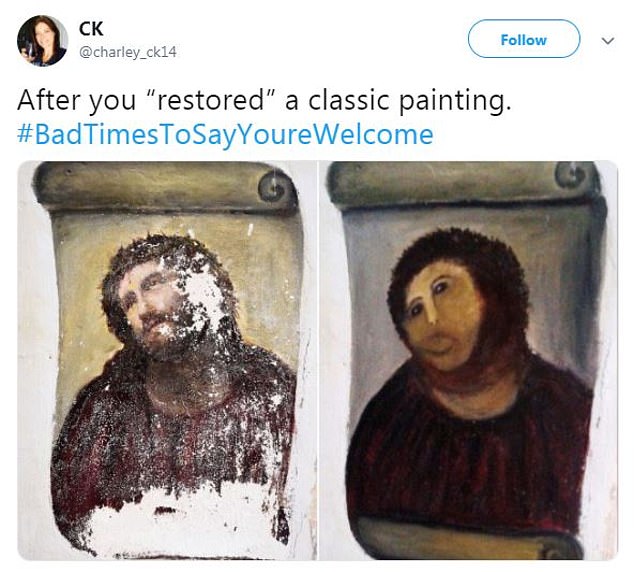 #BadTimesToSayYou’reWelcome: Twitter user @charley_ck14 tweeted a photo of a classic painting that received a tragic makeover, and racked up hundreds of likes

Gross! Some Twitter users took the opportunity to imagine some pretty disgusting scenarios

Twitter user @Eillegal_rose wrote: ‘When your dog peed in the public fountain #BadTimesToSayYoureWelcome’.

‘When I used the last of the toilet paper and I didn’t replace the roll” Twitter user @LadyLecondoliak wrote.

She added: ‘I wanted to see your adaptation skills.

Others tweets about ‘bad times to say you’re welcome’ were inspired by awkward work-related situations, including a Tweet from user @AAskelson which read ‘when you fire someone’, and one from @valinvogue saying: ‘Drinking off the office coffee without making another pot’. 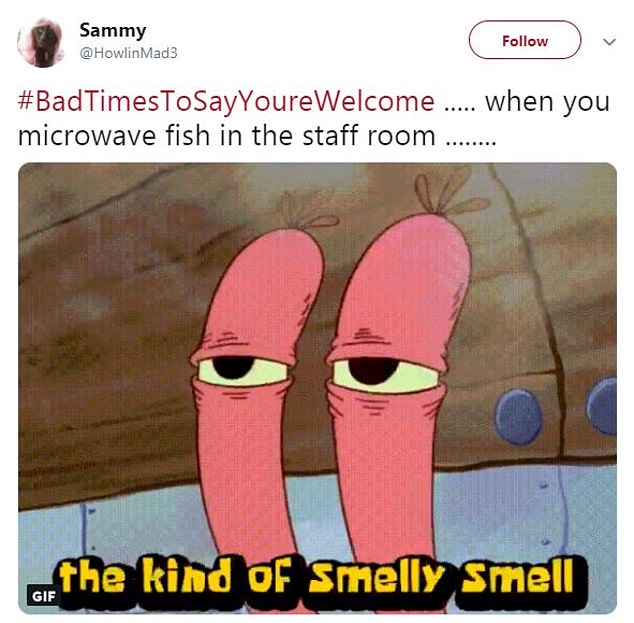 Office life: Others used the opportunity to Tweet the worst times to say ‘you’re welcome’ in a work environment

Another popular category of replies to the thread included family-related situations.

User @KairosOfLife tweeted: ‘When your kids figure out their Easter baskets came from Walgreens not the Easter bunny. #BadTimesToSayYoureWelcome’.

Another user @ChetCost tweeted: ‘#BadTimesToSayYoureWelcome The husband to his wife, right after she gives birth.’ 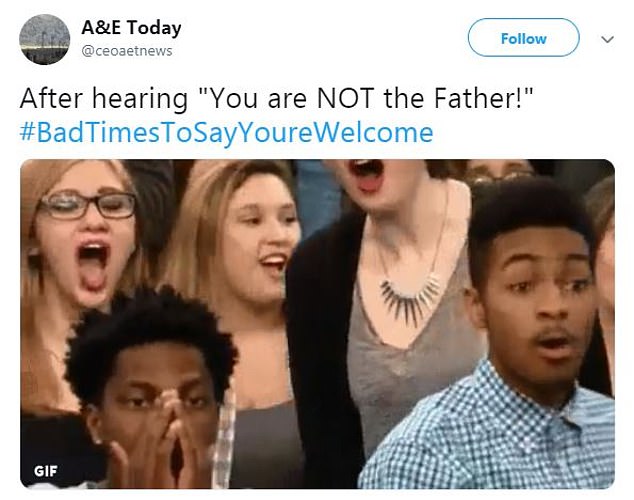 And, while many of the Tweet replies naturally fell into categories, most Twitter users decided to share some random, and just plain awkward, situations during which ‘you’re welcome’ wouldn’t be a good choice of words.

User @JanGilson wrote: ‘When you’re wished a happy birthday,’ and @LoxRedFox added: ‘After hitting the back of your leg with a shopping cart.’

‘After being thanked for handing over your bank account details’, wrote another Twitter user under the name @neilt76.

Awkward! Some Twitter users responded to the thread with funny, lighthearted scenarios that would leave you feeling pretty embarrassed