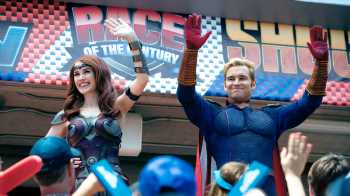 In the first episode screened at the Tribeca Film Festival, Amazon’s new superhero series “The Boys” exhibits a fair bit of promise — as well as some frustrating tendencies. The best aspects of the pilot are all rooted in world-building, in thinking through a universe in which superheroes were actual celebrities, and monetizable at that. The worst pop up through a tendency to oversell the cynicism of such a universe, to work overly hard to convince us some of the characters we’re only just meeting are disgusting and corrupt.

Based on an ultraviolent comic book series, “The Boys” depicts its heroes as motivated not by the desire to help humanity but by a craving to help themselves to its spoils. Indeed, their exploits can end up causing serious harm, as when the hero A-Train (Jessie Usher), moving recklessly at super-speed, runs literally through the body of Robin (Jess Salgueiro), leaving her boyfriend Hughie (Jack Quaid) holding onto her disembodied hands as the rest of her body liquifies. Knowing that this scene transpires in lovingly shot slow motion may help you understand if this show is for you. It sets up Hughie’s quest for revenge (abetted by Karl Urban as a mysterious figure whose superpower may be charismatically making the labored script seem human) as explicitly as possible. Too explicitly, perhaps, by half.

Even when they’re not incurring a body count, the superheroes employed as a marketing tool for the show’s Vought firm are, at least, hurting the image of heroes: The Deep (a sort of Aquaman figure played by Chace Crawford) demands sexual favors from his newly recruited superheroine colleague Starlight (Erin Moriarty, optimistic and then broken), who follows through so as not to lose her position on this show’s version of the Justice League before it’s even begun. We later see her vomiting in shame in a bathroom.

It takes a taste for subversion to cast Crawford — a former teen idol possessed of good looks of a sort of lab-grown blandness — as a superhero, and then make that superhero not an avatar of American goodness but of the worst sort of male chauvinism and toxicity. (In another life, Crawford might have played Superman; now he’s acting out a vision of sexual coercion in Metropolis instead, and not convincingly. Pained throughout, not having as much fun as a real bad guy would.) But it doesn’t really take imagination. At least in its first episode, “The Boys” doesn’t so much reimagine the superhero genre — as, say, the book “Watchmen,” soon to be adapted for HBO did, or as “Preacher,” with which “The Boys” shares executive producers Seth Rogen and Evan Goldberg, does — as just imagine its polar opposite. Moral decay — the opposite of goodness — isn’t moral complexity; indeed, watching characters with no peskily complicating morality whatsoever is indeed a fairly simple endeavor.

All viewers at Tribeca had to go on was a first episode, and “The Boys” could become any number of things as it rolls on. But the tone it struck in its first outing was a dully familiar one — the sense that to transgress, alone, is enough. If this show is to actually satirize the wide-open target of superhero entertainments, it’ll need to find a second gear, and quickly.