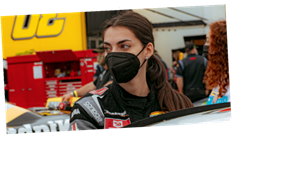 Toni Breidinger made history as the first Arab-American female driver to compete in a NASCAR national series after she made her debut at Daytona International Speedway over the weekend. The 21-year-old on Monday told CBS News it was “exciting” to be a trailblazer.

“Everyone always loves to be the first,” said Breidinger, who is of Lebanese descent. “I also don’t want to be the last.”

Dayton Debut. My team and I set 2 goals to finish the race and stay out of trouble. Excited for the rest of the of the season pic.twitter.com/YEdpqYWaGN

Driving in the 2021 ARCA Menards Series season-opener in Daytona, Florida, on Saturday was “a dream come true” for Breidinger, who placed 18th.

“I went to that race last year just to go watch and I told myself, ‘I want to be racing here next year,'” she said. “So, that was a really big goal for me.”

The feat was twelve years in the making for the Hillsborough, California, native. Her love for the sport began after her father took her and her twin sister Annie go-karting for fun over winter break when they were 9 years old. When she sat in the go-kart, she knew that what’s she wanted to do.

“As soon as I got into a go-kart for my first time, I was like, ‘I want to be a race car driver,'” she said. “I told my parents that [and] I think they just kind of thought I was just saying that… but I knew in my mind I was going to do that.”

She is a 19-time United States Auto Club race winner, the most ever for a woman. In 2020, she finished fourth in the Carolina Pro Late Model Series with racing team DLP Motorsports. In a sport overwhelmingly dominated by White men, for Breidinger, it doesn’t matter.

“I’m a driver just like everybody else,” she said. “As soon as the helmet comes on, gender is irrelevant.”

Although she’s friends with a few of her competitors, those feelings change during a race. “Once you’re on the track, you don’t really have friends out there,” she said.

Throughout the season, Breidinger – who joined the Young’s Motorsports racing team earlier this month – will compete in the ARCA Menards Series stock car competition and NASCAR’s pickup truck competition, the Camping World Truck Series. She’ll be driving a Chevrolet SS car for the ARCA Mernards Series and a Chevrolet Silverado for the Camping World Truck Series.

For now, she’s got her eyes on the Phoenix Raceway in Avondale, Arizona, a track she’s familiar with.

“I’m hoping for a top 15 there and just getting like good results throughout the season… The goal is just to learn and finish the races and stay out of trouble,” she said.