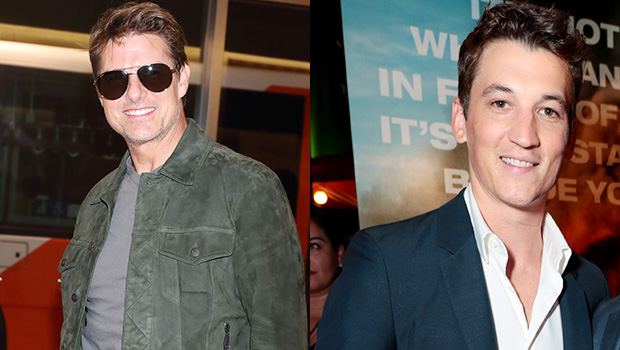 Is a new Hollywood bromance in the works? Miles Teller and Tom Cruise have become ‘fast friends’ while working on the ‘Top Gun’ sequel, and we EXCLUSIVELY hear their ‘chemistry’ might make this film ‘better than the original.’

Top Gun: Maverick, soaring into theatres in 2020, reunites Tom Cruise, 56, and Val Kilmer, 58, more than thirty years after the 1986 original. Yet, while fans will be thrilled to see Iceman and Maverick back together, it seems that Tom’s scenes with Miles Teller, 31, will be the ones to watch. “Miles and Tom have amazing chemistry on set, and they are clearly having a blast filming together,” a source close to the Whiplash star EXCLUSIVELY tells HollywoodLife.com.

“Miles was psyched to land the Top Gun role,” the insider tells HollywoodLife.com. “He’s a huge fan of the original and he’s always wanted to work with Tom, who he thinks is an amazing actor.” The source also says that Mile is “loving every minute” of filming the Top Gun sequel. “There’s a great atmosphere, and even though everybody is super professional once the cameras start rolling, there’s lots of joking around and camaraderie between takes.

“It’s always a gamble to shoot a sequel, especially when the first film is so iconic, but the script is awesome, and everybody is giving it their all, so it looks like Maverick, could be even better than the original,” the source adds. Considering that Miles wasn’t even alive when Tom, Val, Anthony Edwards, and Kelly McGillis all first felt the need – the need for speed – revisiting the original is indeed quite a risk.

Yet, as a source close to Tom EXCLUSIVELY tells HollywoodLife.com, it’s one he’s glad he took. “Tom is loving playing Maverick again,” the insider says. “He knows how important the original film is and has made sure all cast and crew are aware that they are making a sequel that means a lot to people. So, everyone is really on the same page.”

“Miles is professional,” the second insider tells HollywoodLife.com, “and a very nice guy. He knows this opportunity is amazing so both he and Tom on the same page.” The source also said that the two “became fast friends and it shows on screen. Filming has gone very well so far and Miles and Tom are giving it their all because they both genuinely like each other. It’s a very happy set to be on where people are excited to come to work.”

Will this bromance make Tom Gun: Maverick fly well through the danger zone and into box office glory? Fans will have to wait until 2020. Until then, they can start coming up with Tom and Miles’ bromance name. Tomiles?