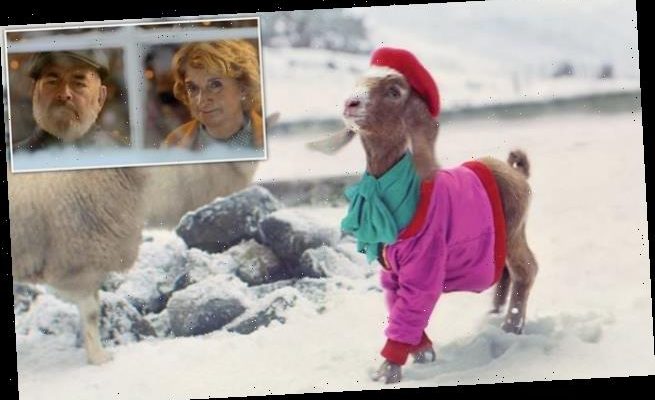 TK Maxx has become the second major high-street chain to fire off an early Christmas advert in the race to attract festive shoppers, behind Argos.

The playful advert, which will hit the big screens tomorrow, begins with a cheerful goat walking by the farm on a snowy day, wearing a snazzy hot pink jumper with a turquoise scarf and a red beret.

It is then revealed the colourful garment has been gifted to ‘Lil Goat’ by the farmer, who says the animal ‘deserves the present after the year she has had.’

The advert, which is narrated by Love Actually star Bill Nighy, goes on to convey the message that after a rough year like 2020, which saw countries across the world grind to a halt due to the Covid-19 crisis, people deserve ‘great gifts.’ 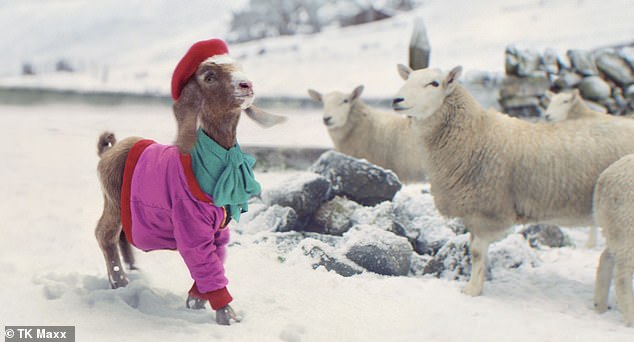 TK Maxx has become the second major high-street chain to fire off an early Christmas advert in the race to attract festive shoppers, behind Argos

The advert aims to highlights how well-picked gifts can make someone feel very special.

In the clip, the farm animal walks through snowy fields to the sound of The Game Remix by Gabriel Garzon Montano, featuring Junglep**** and Seb remix, which is in stark contrast with the winter wonderland landscape around her.

The proud goat struts her stuff to the sound her internal monologue, which can be heard saying: ‘Wow, how did you put that together, where did you get that from?’

She then says ‘I know right, it’s a gift,’ as she passes a flock of sheep who are not wearing clothes. 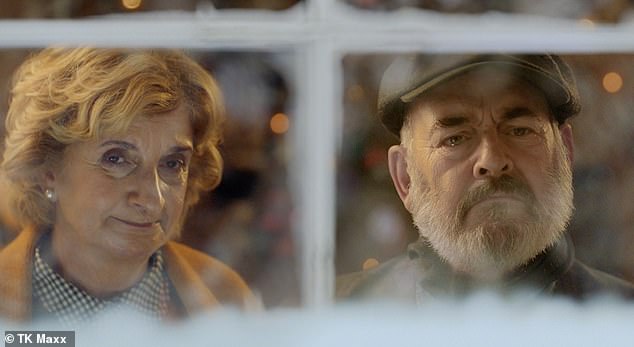 In the advert, a couple look at the goat, who is strutting her stuff outside in a jazzy new jumper before it is revealed the farmer gifted the creature the garment

The camera than pans to a farmer and his wife who are looking out at the cheerful creature from the comfort of their own home.

The wife looks at her husband and asks: ‘Did you buy the goat a deserving outfit?’

The farmer, who is gazing at the goat while he answers, responds: ‘She’s had such a hard year.’

‘She blooming well deserves it if you ask me,’ he adds, with tears in his eyes. 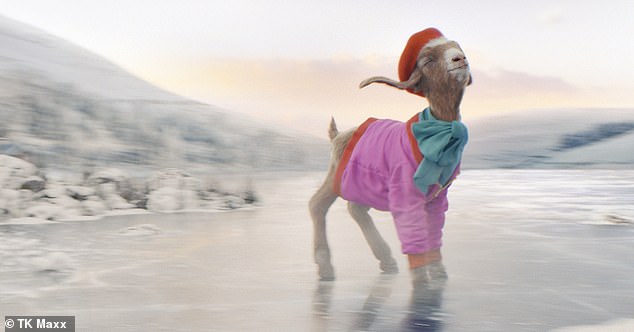 As the cheerful creature struts across the snowy landscape in the colourful outfit, the farmer says she ‘blooming well deserves’ the gift after ‘a hard year’, alluding to the Covid-19 crisis

The clip then shows the goat jumping through some snow and skating on ice while the advert sounds: ‘Everyone deserves great gifts this season.’

TK Maxx’s approach is different from the adverts put together by other retailers such as John Lewis, who usually go for emotional adverts to mark the holidays.

Deborah Dolce, Group Brand & Marketing Director at TK Maxx said: ‘We wanted to recognise the difficult year that we’ve all had and at the same time offer a bit of joyful optimism.

‘This charming ad is a playful reminder that the gift of giving is really special and can bring such sweet pleasure to all. 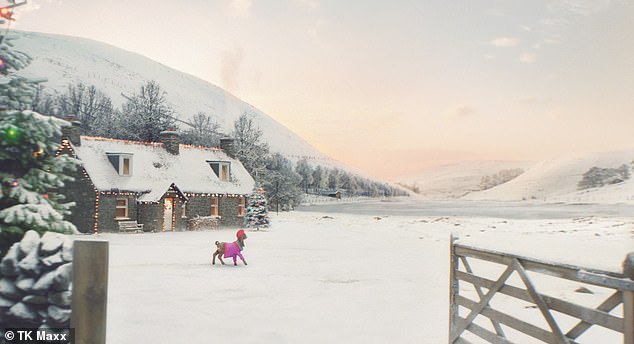 The Winter Wonderland landscape in the advert is in stark contrast of the soundtrack, The Game Remix by Gabriel Garzon Montano, featuring Junglep**** and Seb remix

‘We have hundreds of local stores across the country, plus TKMaxx.com, and we are placing a great emphasis on two simple things this Christmas, safety for our shoppers and staff plus an amazing selection of unique gifts at really affordable prices.

‘We think everyone deserves something carefully picked with love, this year of all years,’ she added.

Argos was the first to reveal its Christmas advert this year, with an adorable magical advert featuring two sisters which is set to air for the first time tonight. 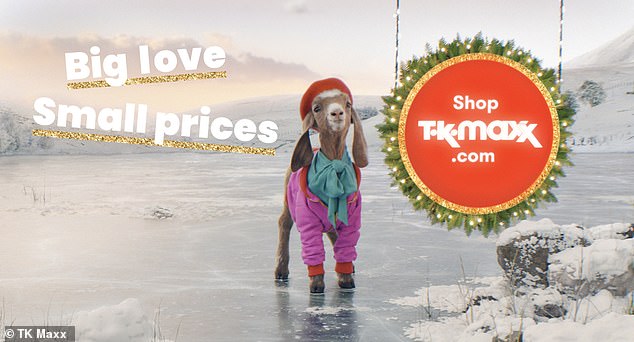 The advert is narrated by beloved Love Actually actor Bill Nighy, who says ‘everyone deserves great gifts this season’

Set to the tune of Gary Barlow’s brand new single, Incredible, the wondrous world of magic plays a starring role in the festive campaign, which celebrates the joy of going back to basics and classic Christmas traditions.

However, fans of Christmas adverts will be disappointed to hear that they are most likely to be be scaled back this year as firms feeling the strain of the pandemic are projected to slash marketing budgets by £725million.

The annual blitz of festive promotions is set to be more muted as hard-hit retailers cut costs and brace for a slump in sales.

Marks and Spencer has already scrapped its Christmas clothing adverts and have instead turned to online influencers to showcase their products. 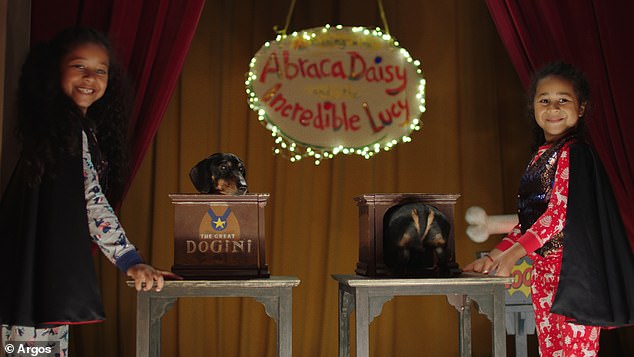 This year’s Argos Christmas advert sees two very cute sisters lust after a magic set, and then become to mini Houdinis performing to their family. The performance includes a festively adorned dachshund and sees the audience pause for breath before the girls complete their trick, to everyone’s delight

Advertising spend in the fourth so-called Golden Quarter is expected to sag by 10.5 per cent to £6.2billion, according to the Advertising Association and Warc.

New lockdowns regulations announced yesterday by the Prime Minister to tackle a resurgent virus has been blamed on the fall in advertising spend as retailers face reduced demand because of restrictions.

Cinema advertising is forecast to suffer the biggest slump of 66 per cent as the movie industry remains especially bruised by restrictions which closed cinemas and saw filming halted.

Radio advert spending will drop by 13 per cent, direct mail 12 per cent and TV 2 per cent, the AA predicts.

The analysis revealed total UK ad spend is set to plunge 14.5 per cent this year to £21.5billion.