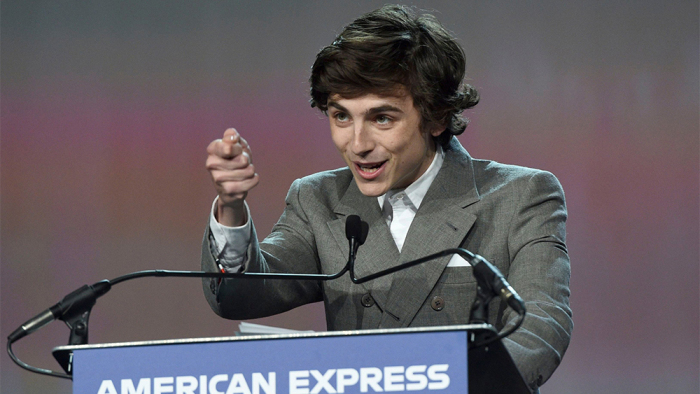 Timothee Chalamet accepted the spotlight award for his work in “Beautiful Boy” at Thursday’s Palm Springs International Film Festival, and took the opportunity to reveal that he didn’t always want to be an actor.

“There’s a moment when you’re growing up where you realize the adults around you, your parents, they’re all just people. Everyone is just a messy human, and today that’s what inspires me the most in my acting,” he began.

“But that realization at first, that we’re all vulnerable, is kind of scary and defeating,” he continued. “At first I wanted to be a professional athlete, think LeBron James and Lionel Messi. They inspired me with their invincibility; I looked in the mirror and I humbly realized I’d never be an athlete for many reasons,” he said as the audience laughed.

Chalamet explained he went to a performing arts school in New York and, there, began to act, which changed his entire perspective.

“Something changed and I felt myself falling in love for the first time in my life. I was getting inspired in a way I had when I’d wanted to become an athlete, but this time the inspiration wasn’t to be superhuman, but to be very human indeed,” he said. “The invincible Messis and LeBrons weren’t as interesting to me as the artists who were vulnerable for a living — the Heath Ledgers, the Joaquin Phoenixes.”

Chalamet went on to praise Laura Dern, who introduced him, explaining that he remembers watching “‘Blue Velvet,’ which you shot when you were 17 years old and being so deeply moved.”

Watch the full speech above.