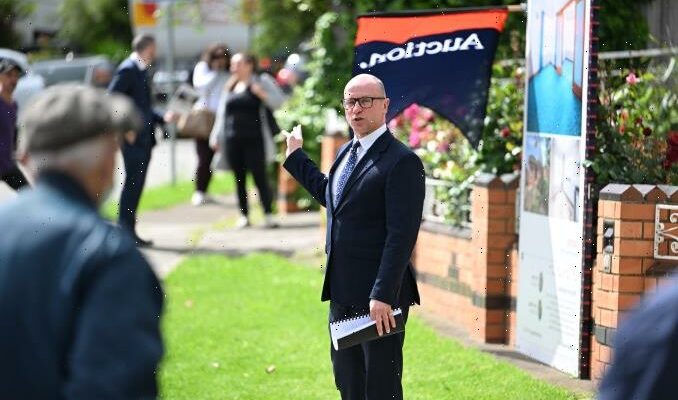 A time warp house in Niddrie, left virtually unchanged since it was built in the 1960s, got two genuine bids, but failed to sell under the hammer on Derby Day Saturday.

The unique five-bedroom home at 68 Newman Crescent, passed in on a bid of $1 million, and was later advertised for private sale for $1,069,000. It originally had a price guide of $1 million to $1.1 million. 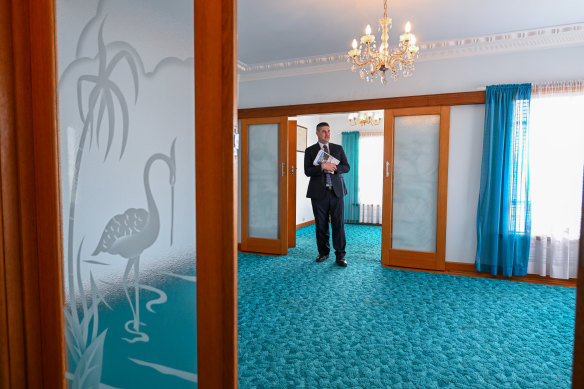 The home included electric blue carpet which had not been updated since the 1960s.Credit:Joe Armao

The home — with original features like electric blue carpet, matching curtains and etched glass sliding doors — had remained mostly untouched since it was built by the vendor’s family.

But even its originality could not entice more than one bidder to make an offer.

A crowd of around 20 people remained mostly silent, when Barry Plant Essendon auctioneer Tony Catena called for an opening bid of $980,000. Eventually, a woman kicked the auction off.

Catena called for $990,000, but was forced to make a vendor bid when no other offers came.

A final $1 million offer came from the original bidder, before the property was passed in and negotiations began. No deal had been struck by the time this story went to press.

Catena said buyers were still being cautious, with some believing properties would sell for well above the advertised price range, even though the market was slowing.

“But I think the house will sell because those that are priced right tend to sell pretty quickly,” he said.

The auction was one of 490 scheduled on Saturday, with fewer held thanks to Derby Day and the Melbourne Cup long weekend.

Another home being sold as part of a deceased estate sold under the hammer in Carlton North for $3.63 million, above the $2.7 million to $2.9 million indicative selling price.

The four-bedroom home, known as Lexton, at 556 Rathdowne Street had four bidders competing for the keys, with a family becoming the buyers.

Bidding opened on a vendor bid of $2.7 million with the next bid hitting $3 million. The home was called on the market at $3.03 million with a flurry of offers taking it to its sale price.

“It was a really lovely auction, and it was nice to see it sell because it is a pretty unique home,” Curtain said.

A crowd of around 150 watched on, with the rain stopping as the sun came out during the auction.

Three buyers were interested in the property, but failed to make a bid at the auction. They were negotiating with agents after the property passed in.

Nelson Alexander Carlton North partner Tom Roberts said he expected the tiny cottage, which had been owned by the same family for more than 40 years, to sell quickly.

“The market is very price sensitive and a lot of people are still thinking they’ll have to spend in excess of quoted prices to buy,” Roberts said. “But the learnings are that buyers should know agents are getting it pretty right now with prices and if they don’t make a bid, then they could miss out.”

In South Melbourne, a historic home built before the first Melbourne Cup was run, passed in on a bid of $3.01 million, before selling in post auction negotiations for $3.15 million.

The four-bedroom bluestone home at 9-11 Clarendon Place had an indicative selling price between $2.8 million and $3 million and was snapped up by a downsizer.

Jellis Craig Port Phillip director Simon Gowling said the home was one of the first built in Melbourne in 1856 — five years before the first Melbourne Cup — and is one of only a few that still exists across the city.

“It is a beautiful property,” Gowling said. “A lot of people were out and about, some of them in their racing attire and heading to the track,” he said.

Meanwhile, in Balwyn, bordering with Deepdene, a three-bedroom townhouse sold under the hammer for $1,545,000 above the $1.28 million to $1.4 million price range.

The property at 2/5 Leonard Street had two bidders — both young families — competing and one becoming the new owners after making the winning offer.

Bidding opened at the bottom end of the price range and was called on the market at $1.48 million, with extra bids seeing it sell for $65,000 more.

Ray White Balwyn selling agent Brad Cooper said the property was a good entry-level home to the exclusive Balwyn/Deepdene area and buyers were still interested despite the races.

“I think the volume of auctions will be down on Derby Day in your inner eastern areas, but some people don’t care about the races, they’ll still be there.”

Most Viewed in Property