Thomas Nozkowski, whose small, insistent, richly hued abstractions upended the heroic scale of postwar New York art and helped push painting in a more accessible, personal and wryly self-aware direction, died on May 9 in Rhinebeck, N.Y. He was 75.

Pace Gallery, his representative since 2008, said the cause was pancreatic cancer.

Kind and soft-spoken, displaying little in the way of overt artistic ego, Mr. Nozkowski was nonetheless a man of ambition, intelligence and firmly held opinions.

In the early 1970s, after several years of making large abstract paintings and then more modest Post-Minimal sculpture, Mr. Nozkowski found himself put off by the macho scale of both Abstract Expressionism and Minimalism, and by what he considered their “imperialist” implications.

He decided to work small, and on the easel — initially painting on 16-by-22-inch pieces of art-store canvas board and later on somewhat larger rectangles of linen stretched over wood panels. He wanted, he told one interviewer, “a size that was scaled to my friends’ apartments, that could hang in a three-room walk-up tenement on Seventh Street.” 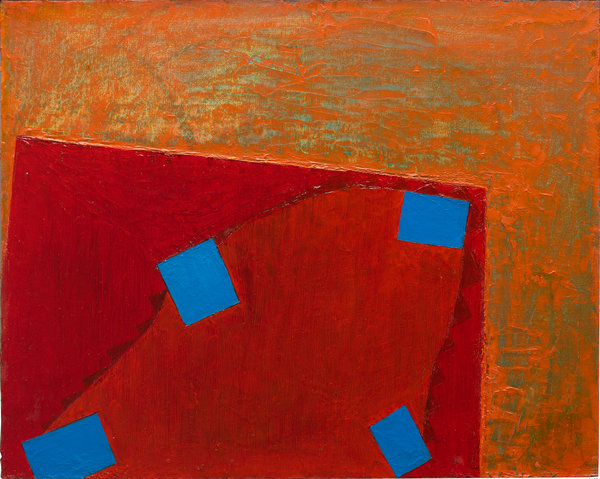 He developed a wide-ranging vocabulary that fused the biomorphic and the geometric into abstract forms noted for their varied colors, their paint handling, and associations ranging from tiled floors or cell clusters to architecture or outer space. He said his untitled abstractions were distilled from his own experiences of just about anything: memories, relationships, movies, books, other art, and the environment as he encountered it on his daily walks in either upstate New York or New York City, where he and his family lived for years in a nominally refurbished synagogue on the Lower East Side.

His approach gave him an unlimited supply of source material, which he resolved into orbs, dots, ellipses, bulges, partial grids or arcs. This strategy also protected him, he said, from the predictability of a signature style — although not quite.

A Nozkowski is recognizable by its modest size and richness of color and surface, and also by a kind of dissonance both within the compositions of the individual paintings and among groups of them. This means, perhaps paradoxically, that each of his paintings functions as a peculiarly single entity, a world unto itself; whatever you experience with one Nozkowski doesn’t necessarily translate to the next.

Mr. Nozkowski emerged relatively late. He did not have his first solo gallery show of paintings until 1979, when he was 35, at the 55 Mercer Street Gallery in SoHo, a respected artist cooperative.

For some four decades, he arranged his schedule so he could paint for four hours a day while working — as a designer for Warner Books and then Mad magazine, a production director at Mad and, finally, a painting teacher at Rutgers University.

The Museum of Modern Art acquired one of his paintings in 1983, and by the late 1980s he had had the first of several surveys in small museums here and abroad. He exhibited regularly (soon enough in commercial galleries), and almost from the start saw his work analyzed by a widening circle of admiring writers, including Joseph Masheck, Peter Schjeldahl, Marjorie Welish, John Yau and Robert Storr.

In 2008, when he joined Pace Gallery, he achieved both a new prominence and elder-statesman status.

Thomas Edward Nozkowski was born on March 23, 1944, in Teaneck, N.J., to Edward Stanley Nozkowski and Edna Ruth (Angevine) Nozkowski, and grew up in Dumont, N.J. His father worked in an Alcoa Aluminum factory and then as a postman. His mother worked in factories and as a bookkeeper.

One of his aunts was a schoolteacher who provided art supplies for him and his younger sister to use on weekends. His parents loved to travel, and the family took frequent camping trips, partly to save money and partly to be close to nature.

The family put an emphasis on learning. Mr. Nozkowski’s mother often arranged visits to major corporations, a high point being a tour of a U.S. Steel plant in Pittsburgh. Mr. Nozkowski acquired his lifelong habit of long daily walks from his father.

He was reading at an adult level by age 10 and often read through all the books by an author who interested him. He also began keeping track of all the movies he saw and became a knowledgeable film buff.

He traveled to Manhattan on his own for the first time when he was 13 and his school nominated him to take an astronomy class at the Hayden Planetarium at the American Museum of Natural History.

When he was a senior in high school he won a scholarship to attend a painting class at New York University’s School of Education, where he studied with Robert Kaupelis (1928-2009) and Hale Woodruff (1900-80).

Mr. Nozkowski studied at the Cooper Union and, after taking a year off — mostly to watch films — graduated in 1967. That year he married a fellow Cooper student, the ceramic painter and sculptor Joyce Robbins. She survives him, as do their son, Casimir Nozkowski, a filmmaker; his sister, Mary Dana Greenwood; and a grandson. He lived in High Falls, in upstate New York.

When James Calm, a peripatetic videographer who records many New York gallery openings, buttonholed Mr. Nozkowski at one of his and asked what advice he would give to young painters, Mr. Nozkowski looked into the camera.

“The trick,” he replied, “is to do what you love and to be content alone in the studio. And if you have that, you have everything you need.”