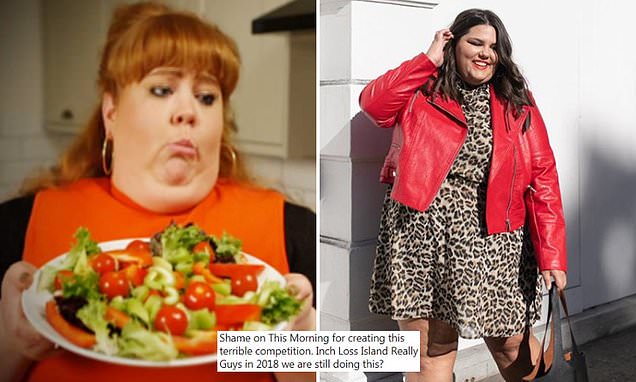 ‘Shame on you!’: Plus-size blogger blasts This Morning for promoting its upcoming ‘Inch Loss Island’ bootcamp with a video of fat people refusing vegetables and failing to exercise

This Morning has been criticised by a plus size blogger for its ‘fat-shaming’ new segment ‘Inch Loss Island’.

During Thursday’s episode the ITV programme debuted an advert looking for overweight volunteers to take part in its new weight loss programme, which will send people looking to shed some pounds to a retreat in the Caribbean.

The clip included shots of an overweight woman trying to do up her jeans, another curvy woman looking dismayed at a plate of vegetables and a couple gorging on a large pizza each. 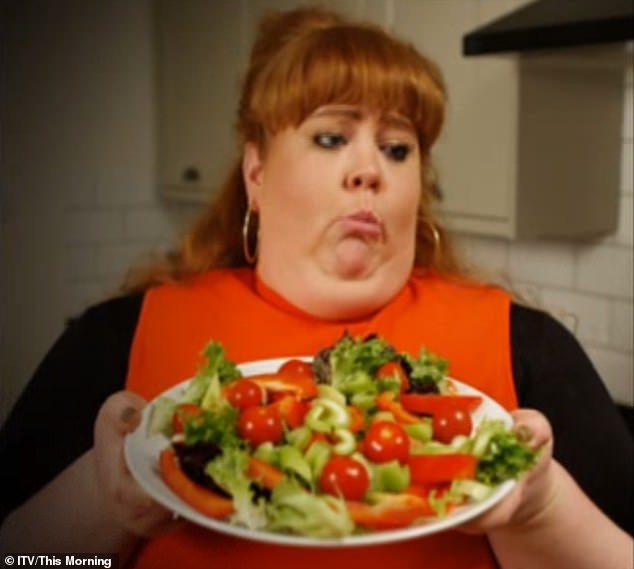 ITV’s This Morning has come under fire for its new Inch loss Island segment, which was advertised on Thursday’s episode and featured an overweight woman refusing to eat vegetables (pictured) 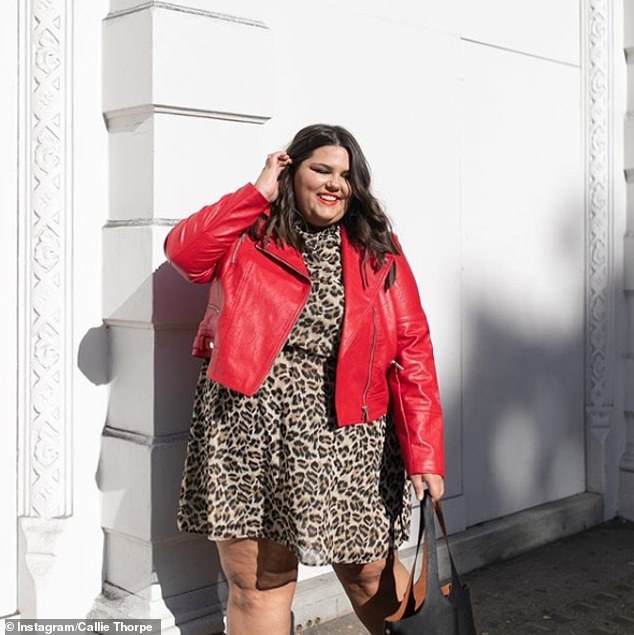 This Morning hosts Phillip Schofield and Rochelle Humes introduced the clip, describng it was a way for viewers to get involved in the show.

In a shared voiceover, they said: ‘Has your weight been getting you down? Are you making bad decisions about your diet?

‘Are you ready to tackle your relationship with food and exercise in 2019? Well we’re here to help you.’

The voiceover was played over images of overweight people gorging on food and struggling to exercise. 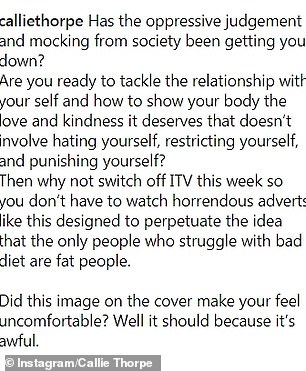 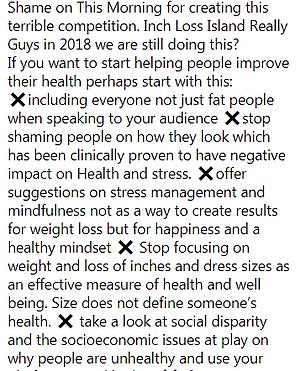 Callie started by suggesting other ways that the advert could make people feel better about themselves (left), before asking why This Morning producers thought the advert was acceptable ‘in 2018’ (right) 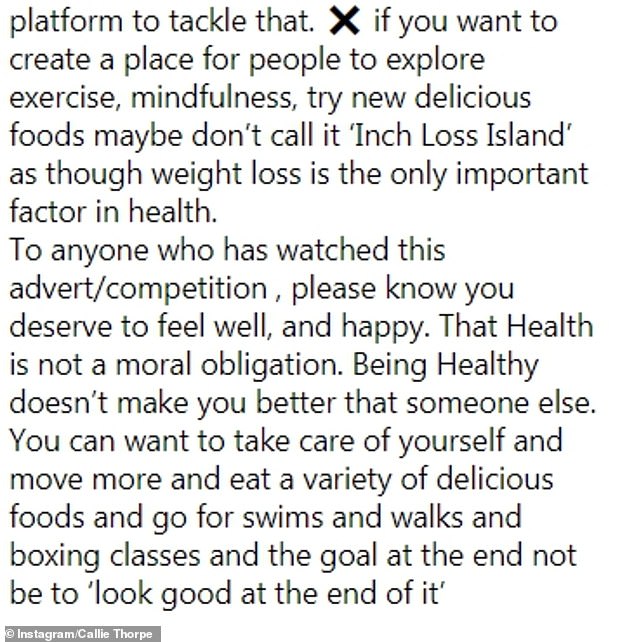 She then spoke to people who might have been upset by the advert (pictured), saying ‘you deserve to feel well and happy’

Callie continued by saying that weight loss camps don’t work (pictured), telling her followers ‘you deserve better than that’

The presenters revealed that ‘three lucky viewers’ would be able to jet out to Antigua for the weight loss bootcamp, where they will receive dieting and nutritional advice and take part in exercise classes such as yoga.

Callie shared the clip on Instagram, and came up with her own idea about how viewers could feel better about themselves.

She wrote: ‘Has the oppressive judgement and mocking from society been getting you down? Are you ready to tackle the relationship with your self and how to show your body the love and kindness it deserves that doesn’t involve hating yourself, restricting yourself, and punishing yourself?

‘Then why not switch off ITV this week so you don’t have to watch horrendous adverts like this designed to perpetuate the idea that the only people who struggle with bad diet are fat people. 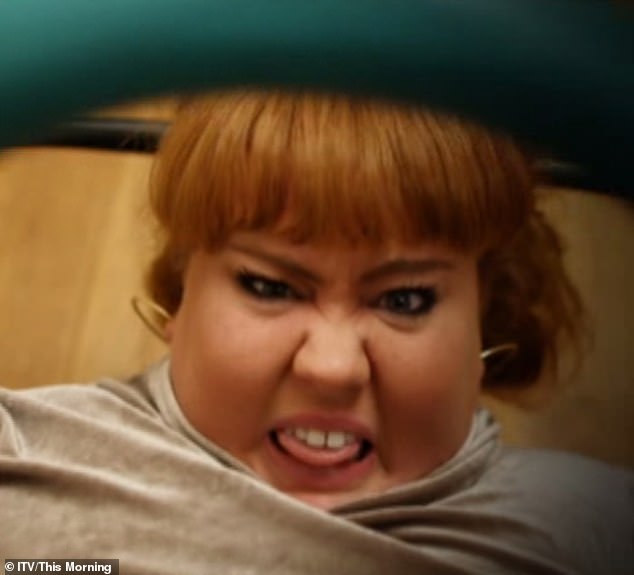 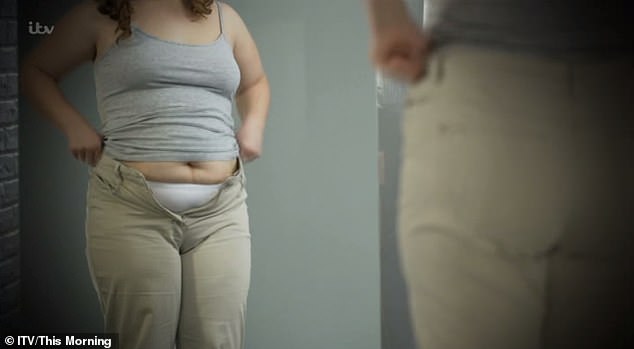 ‘Did this image on the cover make your feel uncomfortable? Well, it should because it’s awful.’

Callie then questioned why producers thought the advert was a good idea ‘in 2018’.

She then offered advice on how the Inch Loss Island could be improved, including to stop ‘shaming’ people about their weight.

Callie then sent a message to anyone who had been upset by the footage, saying: ‘To anyone who has watched this advert/competition, please know you deserve to feel well, and happy. That health is not a moral obligation. Being healthy doesn’t make you better that someone else. 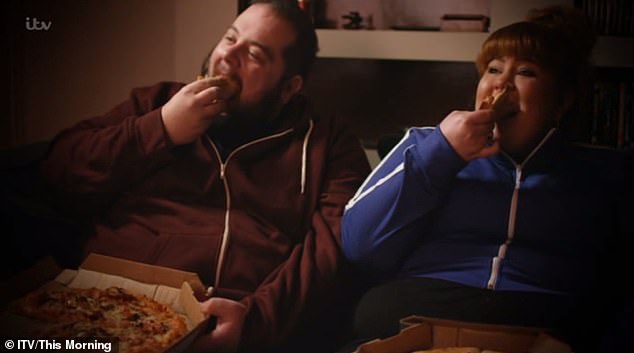 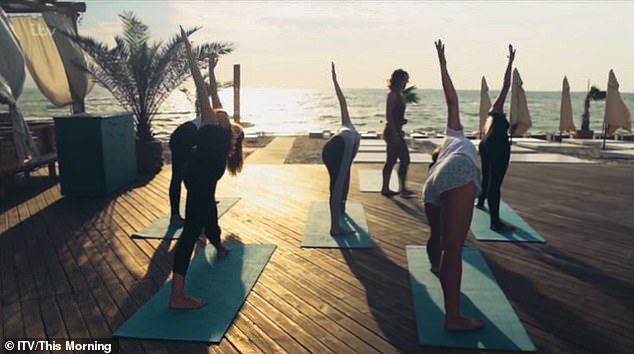 ‘You can want to take care of yourself and move more and eat a variety of delicious foods and go for swims and walks and boxing classes and the goal at the end not be to ”look good at the end of it.”

‘Please stop believing that ‘inch loss islands/weight loss camps designed to only focus on the outside are an effective tool for health and are the answer. You deserve better than that.’

MailOnline has contacted This Morning and is awaiting comment.