Lifetime is currently feeling the Christmas spirit, but this doesn’t mean there aren’t new “dark & twisty” movies on the way. The network’s latest offering Stalked By My Patient isn’t based on a true story, but it’s the perfect way to escape the endless holiday cheer for a bit of salacious drama. After all, that’s why viewers love Lifetime, right?

Per the website’s description, Dr. Hillary Penzer (Bree Williamson) is a popular doctor who is known for being extra kind to her patients. But, her latest patient Gregory Lipton mistakes her stellar bedside manor for a love connection and develops an obsession with their non-existent romance. As the film’s title suggests, he starts stalking her in hopes that they will have a future together. Basically, it’s the quintessential Lifetime movie plot that loyal viewers crave every week.

Stalked By My Patient’s trailer starts off relatively normal and gets increasingly disturbing. Dr. Penzer checks on Gregory, who thanks her for saving him, and they engage in routine small talk. Somehow, Gregory gets out of bed and makes his way to a computer to look up Dr. Penzer’s information, including her address and phone number, in the hospital system.

Dr. Penzer is terrified when he calls her while she is at home and comments on the color of her dress. Gregory then dives into full-on Lifetime movie man weirdo mode by donning a black baseball cap, standing in the dark outside her windows, and injecting her fiancé with something sinister. The clip ends with their ultimate showdown as Gregory says they will be together in this life – or the next. Yep, Dr. Spencer is going to have to fight to the death to get out of this sticky situation. 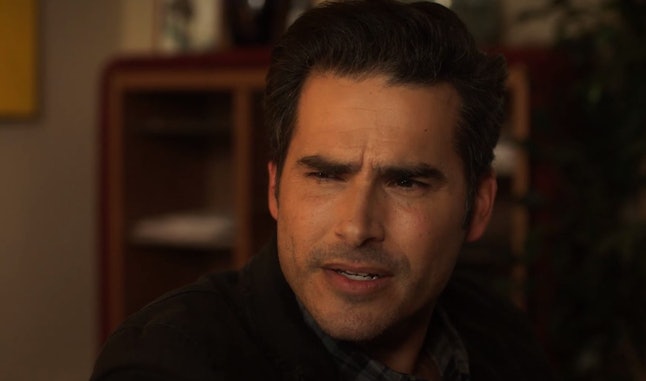 There are a ton of questions that need to be answered about this story. Gregory was wearing a hospital gown and still hooked to his IV bag at an employee’s desk and no one saw him hacking into a computer. What kind of hospital is this and where are the security measures? And, how could Dr. Penzer not see him standing in her yard? It was dark, but there are clearly no blinds and he was out in the open. If she just looked out of her window, she would have seen him right there. Lifetime stalkers usually try to hide behind sketchy, thin bushes but Gregory is apparently bolder than his counterparts. He also looked painfully suspicious as he watched her from his car in the middle of the day.

And, why would she ever confront this guy alone? Her fiancé is either dead or in a hospital now, but she should have brought extra reinforcements because anyone who creates an entire relationship in their head out of thin air is probably a kidnapper and murderer. Hopefully, Dr. Penzer has a spare weapon handy because there’s no way to reason with Gregory.

Stories about obsession, stalking, and murder are staples in the Lifetime brand. Thankfully, Stalked By My Patient is a fictional account of real-life issues so fans can watch it all go down without any guilt on Dec. 14 at 8 p.m. ET.