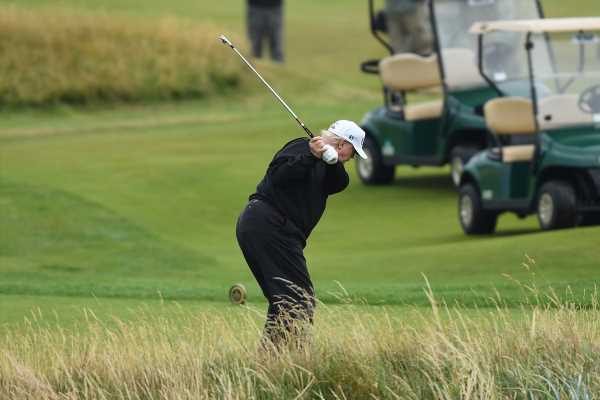 As a presidential candidate, Donald Trump famously proclaimed that if elected, he’s "not going to have time to go golfing." But that’s not the case. According to a new analysis from HuffPost, President Trump’s golf trips have cost taxpayers over $100 million so far. Trump has spent 174 days of his presidency on one of his own golf courses, HuffPost reports, including 24 separate trips to his Mar-a-lago property in Florida.

Trump regularly criticized Barack Obama for playing golf as president; according to SBNation, Trump made this criticism no fewer than 27 times between 2011 and 2016 — and that’s only counting his tweets.

"I mean he’s played more golf than most people on the PGA Tour, this guy," Trump said of Obama in 2016. At a separate campaign stop the same year, Trump claimed that he "may never see" any of his golf properties again if he wins the election, because he’s "not going to have time to go golfing."

According to HuffPost’s analysis, however, Obama’s total golf outings over the course of eight years cost around $30 million — just one-third the $102 million that Trump’s golf habit has cost taxpayers during the two and a half years he’s been in office.

Calculating the exact cost of Trump’s golf outings is tricky. The White House generally avoids discussing the financials behind Trump’s frequent golf trips, and often does not announce when he is playing golf. Bustle has reached out to the White House for comment on the HuffPost report.

HuffPost based its analysis on public information about Trump’s golf schedule, as well as a 2019 report from the Government Accountability Office that estimated the cost of four Trump visits to Mar-a-lago in 2017 and several other general golf-related expenses that the president routinely racks up.

The vast majority of Trump’s golf outings were at Mar-a-lago, HuffPost reports: He’s spent a total of 61 days there over the course of 24 separate trips, since taking office, according to the outlet. The total cost of those jaunts was around $81 million, HuffPost reports; according to the GOA report, a weekend trip to Mar-a-lago costs taxpayers around $3.4 million on average. According to HuffPost’s tally, Trump has also spent $17 million in taxpayer money going to his golf course in New Jersey, and a few million more traveling to other courses.

CNN reported earlier in the week that Trump’s golf trips were at the center of a minor diplomatic tiff between the U.S. and Ireland.

The White House announced Tuesday that Trump will visit Ireland in June as part of a larger trip to Europe to commemorate D-Day and the allied victory in World War II. According to CNN, though, this trip was supposedly in jeopardy over Trump’s demand that Irish Prime Minister Leo Varadkar "host" him at Trump International Golf Course in Doonberg, which would have required Varadkar to travel across the country.

The Irish government officially disputed this account, however, and on Tuesday, the White House announced that the trip is on and the two will meet in the city of Shannon. Bustle has reached out to the White House for comment on the CNN report.

Republicans in Congress, many of whom also criticized Obama for his golf habit, have generally been indifferent to Trump’s much more frequent golf habit. In 2016, Sen. John Barrasso accused Obama of "arrogance" and "disregard for the taxpayer" by going on federally-funded golf trips; when asked about the fact that Trump had spent three times as much taxpayer money on golf outings, Barrasso told HuffPost that he "ha[s]n’t followed that at all."

In an interview with HuffPost, Rep Mark Meadows attributed Trump’s $102 million in golf costs to "rounding errors," though there is no evidence that HuffPost’s calculation committed any such errors.