Millie Bobby Brown may have already battled a Demogorgon as her character Eleven on Stranger Things, but now she’s got an even bigger monster to fight. The young star is hitting the big screen in Godzilla: King of Monsters, and the latest trailer for the movie just dropped. The trailer is filled with giant creatures roaring and raring to tear each other apart. But, those creatures are no match for the power of Brown, who steals the spotlight and gives off some major Eleven vibes.

The Godzilla: King of Monsters trailer opens with Brown, as her Godzilla character Madison, sitting in front of a old-fashioned radio, trying to reach anybody outside her dark bunker. It’s not exactly the same as Eleven attempting telekinesis until her nose bleeds, but the struggle is still just as real. When the noise of the monsters outside gets too overwhelming and Brown grabs her head in anguish, you’d swear you’re watching Eleven make her return to the human world from the Upside Down. The trailer goes on to show two giant monsters battling each other, but that’s still not as exciting as seeing Brown get prepping to fight them herself.

Check out the full Godzilla: King of Monsters trailer below:

In this sequel to the 2014 Godzilla film, humans are facing off with not only Godzilla, but also a whole bunch of larger-than-life monsters emerging to the surface of the earth. Towards the end of the trailer, there’s a scene of state officials gathering. One jokes, "So you’d want to make Godzilla our pet." Another responds, "No, we would be his." Yikes, looks like this monster is absolutely no joke. He is on a mission to take over.

Brown isn’t too fazed, though. In an interview with Entertainment Weekly, Brown said:

Sounds exactly like the no-fear attitude you’d expect from someone who’s spent the last two years playing a character who fights demons in the Upside Down. Although, according to Brown, the Demogorgan of the Upside Down isn’t even really that scary. In that same interview with EW, Brown said that Godzilla is definitely scarier than the apparently pretty-cool Demogorgon. She said, "The Demogorgon is pretty chill." 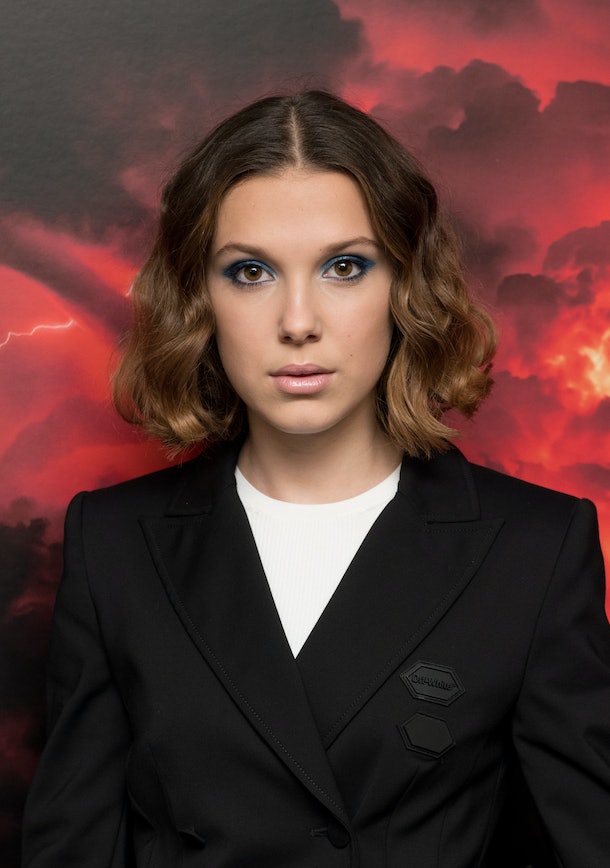 Godzilla: King of Monsters will mark Brown’s official feature film debut. At only 14 years old, she’s already built a career as the go-to monster-fighter of this generation, and Godzilla: King of Monsters has Brown taking her action hero abilities to the next level. At Comic Con last year, she said that fighting monsters in this movie was different from fighting them as Eleven on Stranger Things, according to EW. She said, "Eleven has powers, it’s a lot less terrifying because she can just hopefully kill them. But this was on a much larger scale."

Brown’s character Madison will take on the monsters at that much larger scale when Godzilla: King of Monsters hits theaters on May 31, 2019.